The Acushnet Company’s 2015 Titleist ProV1 and Pro V1x golf balls will be available Jan. 30. The next generation of the Pro V1 franchise, which was introduced on the PGA Tour in 2000, was officially unveiled today at the PGA Merchandise Show in Orlando. The balls will carry a shelf price of $47.99 per dozen. 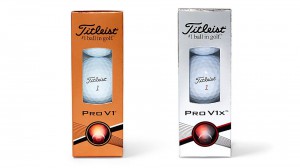 “Golfers often ask us what sets Pro V1 and Pro V1x apart from other golf balls. You can’t just point to one or two things,” said Bill Morgan, senior vice president, Titleist Golf Ball R&D. “The difference is everything. We have more people with more experience designing and making golf balls, the largest intellectual property portfolio and the most sophisticated precision manufacturing processes.

“The 2015 Pro V1 and Pro V1x are the culmination of all that knowledge and all of that technology. The original Pro V1 was revolutionary, no question, but we’ve learned a lot in the last 15 years and these new Pro V1 models are the best we’ve ever made.”

The ProV1 and ProV1x each feature what Acushnet calls a “thermoset urethane’’ cover formulation that is created by a chemical reaction that takes place during the sophisticated casting process. Liquid materials specifically formulated by Titleist R&D are combined and react to form the solid cover. This urethane is termed “thermoset,” meaning that the cover, once formed, will not re-melt. Most competitive urethane-covered golf balls, according to Acushnet, use a thermoplastic urethane (TPU), supplied by an outside vendor and usually formulated for another non-golf product, which is melted and then reformed to create the cover.

“Thermoset urethane is very difficult to work with, but it gives us complete control of the chemical composition. It’s essentially a little chemical plant right in the mold, compared with using an off-the-shelf material like TPU. This allows us to dial in our desired properties of spin control, softness and durability,” said Michael Sullivan, vice president, Titleist Golf Ball Product Development. “We do a lot of testing. We test the urethane on the ball and test it off the ball. In fact, we do so much material testing before it even gets onto a golf ball that by the time it does, we have a solid understanding of how it’s going to react. With the new 2015 models, we tested hundreds of formulations. You simply can’t do that with TPU. In the end, our iterative prototyping process ultimately improves performance for golfers.”

“We’re giving golfers everything they’ve previously had in Pro V1 and Pro V1x with some enhancements,” Morgan said. “They’ll get the extraordinary distance and ball flight they’re accustomed to. But they’ll also get a softer cover, which will add more spin control and feel around the greens. The feedback we’ve received on tour and with club professionals and amateurs clearly tells us that players are benefiting from this improved performance.”