TaylorMade-adidas Golf today introduced its M2 irons, which the company says is designed for golfers who would benefit from an iron that prioritizes distance and trajectory, while also delivering forgiveness and feel. If nothing else, the M2 is as good looking an iron as TMaG has created a several years. The M2 will be on display at this week’s PGA Merchandise Show in Orlando. 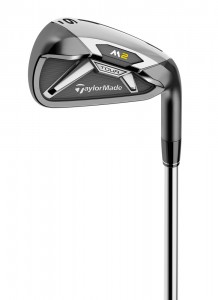 To position the center of gravity low in the M2 iron, TMaG said its engineers utilized a new fluted hosel design to remove discretionary mass from the hosel, redistributing it lower and further back in the clubhead. TMaG says the M2 iron also features an advanced topline construction – a 360° undercut that functions to increase the unsupported face area while saving weight to lower the CG, creating a canvas that lends itself to a unique combination of high ball speed, optimized launch angle and spin rate which yields exceptional distance and high peak trajectory.

This technology, according to TMaG, has resulted in an iron that outdistances the competition, as M2 is longer than Callaway’s XR iron by five yards and Ping’s G30 iron by nine yards, while maintaining a higher peak trajectory than both products.

While the fluted hosel and 360° undercut are the pathways to distance, TMaG said speed and higher ball flight are achieved through the incorporation of a newly designed Speed Pocket and a thin face with Inverted Cone Technology. First found in the RocketBladez irons in 2012, the Speed Pocket is considered one of TaylorMade’s most revolutionary technologies, engineered to increase launch angle and ball speed while providing added forgiveness for shots struck low on the face.

M2 irons also employ what TMaG said is a “3D badge’’ to manage sound and feel that produces this much ball speed. To accomplish this, TMaG said the badge was designed to be extremely stiff without inhibiting ball speed, a balancing act that our engineers were able to execute flawlessly.

“The materials and technologies that went into the M2 iron allowed us to combine metalwood-like launch conditions with exceptional shot height and excellent control and feel. In M2, we’ve achieved maximum distance and peak trajectory metrics to an extent that even shocked those of us who designed and engineered it,’’ said Tomo Bystedt, director of iron product creation for TMaG.