As an unabashed wedge freak, I’m always interested when a new Vokey wedge design is launched. The latest is the Titleist Vokey TVD wedges that Titleist parent Acushnet Co., says provides golfers with the performance and versatility for improved shotmaking through new Spin Milled TX3 grooves and the PGA Tour’s most popular shapes and grinds.

TVD, meaning “Tour Van Design,” originated from Vokey’s work on-site at Tour events, at his grinding wheel inside the Titleist Tour Van shaping and grinding wedges based on players’ needs. The TVD shape is lower in the par (or heel) area and more rounded in the toe for a classic look. 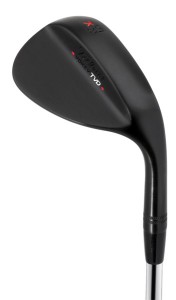 The new Vokey TVD-M and TVD-K models, two of Vokey’s most-requested grinds on the PGA Tour, will be available beginning May 7 on Vokey.com and through authorized Titleist accounts as part of the WedgeWorks Exclusives lineup. Each model is offered in two finishes (California Chrome and Black Ion) and fully-customizable – from length, lie, loft and weight porting, to toe engraving, personalized stamping, custom grips, shafts, shaftbands and ferrules.

The new Vokey TVD-K – available in lofts of 54 and 60 degrees – is the culmination of Vokey’s work with several PGA Tour players, including Adam Scott and Jason Dufner, to develop a sole that is playable in a variety of conditions. TVD-K features a wider, more cambered sole than any other Vokey model, making it very easy to use out of the bunker but still playable for a variety of shots around the green. The newest addition to the series, the TVD-K 54, provides a wide-sole sand wedge option that is not available in the new Vokey Spin Milled 5 (SM5) lineup.

“The K grind has been a huge hit for us,” said Bob Vokey, Titleist’s legendary wedge designer. “It’s only been on Tour for a couple of years but we already have 30 guys using it. I think the secret is the cambered sole. It is wide and forgiving, but the camber keeps the club moving through the turf. So it’s playable in a variety of conditions.”

The new TVD-M – available in 50º to 60º lofts – is the result of PGA Tour feedback on the design, shape and performance of the original TVD series. The new TVD-M has a more rounded teardrop profile, matching the shape of the TVD-K, with increased playability from the crescent-shaped M grind sole. The moderate effective bounce of the TVD-M makes it an excellent all-condition wedge.

“We’ve had a lot of requests to match up the chassis, or shape, of the TVD-M with the TVD-K,” Vokey said. “It’s the natural progression of the series. We now have three distinct shapes in the Vokey family: the SM5 with a high toe peak, the rounded teardrop of the TVD, and the compact look of the Hand Ground series. We have a look to fit anyone’s eye.”

Suggested retail price is $160 per wedge plus personalization packages.