Bridgestone Golf will unveil the 2015 edition of its e-Series golf balls at the PGA Merchandise Show that begins tomorrow in Orlando. The balls feature WEB Dimple Technology the company says brings added distance across the line. Bridgestone will continue to manufacture the e-Series in the U.S. 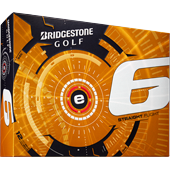 The 2015 e6, Consuegra says, is the softest multilayer golf ball on the market and is designed to help players eliminate slices and hooks.

The multilayer e7 model, according to Consuegra, is designed purely for faster, longer, more penetrating shots, reducing the ballooning in windy conditions often encountered by golfers with a higher ball-flight.