Ernie Els switched to his belly putter (an Odyssey White Hot XG#1 belly putter) about this time a year ago. It’s the putter he used to win last month’s Open Championship at Royal Lytham. 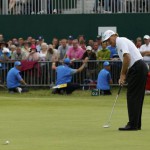 But while the Big Easy likes the results with the long stick, he’s never been a big proponent of long putters. In fact, Els has said he wouldn’t mind seeing long putters banned from competition.

So with that in mind, Els said today he wants to eventually go back to a short putter.

“I feel like I want to get back into the short putter through the FedEx and so forth,” Els said at the WGC-Bridgestone Invitational. “So there’s still plenty of work to do.”

Els warned, however, that no final decision has been made.

“I think I’ve still got four years maybe with the long putter,” he said with a smile. “So I’ve still got a bit of time.  But eventually I want to get to the short putter because I feel back in the day that was my best method of putting.”