It’s been called “the claw,” a version of which was made famous by Bernhard Langer more than a decade ago. Phil Mickelson, however, doesn’t have a name for his new putting grip whereby he putter grip rests thumb and index finger. All Lefty knows is that it’s working- for now. Mickelson rolled the ball well in the first round of the Deutsche Bank Championship, carding a three-under-par 68. 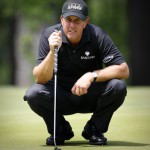 “It’s just a couple of friends of mine have been using it for 10, 12 years and they putt phenomenal with it,” Mickelson said. “On fast greens it’s even better because the touch and the sensitivity is there.

The key for me was the putter – I have the (Odyssey) PT‑82 – has adjustable weights, and I was able to make it a lot heavier, put in a lot heavier grams, so 40 grams instead of 20. So it’s a ton heavier, and that way the sensitivity is there and the head stays very stable.  I think with a light putter it would be difficult to do.”