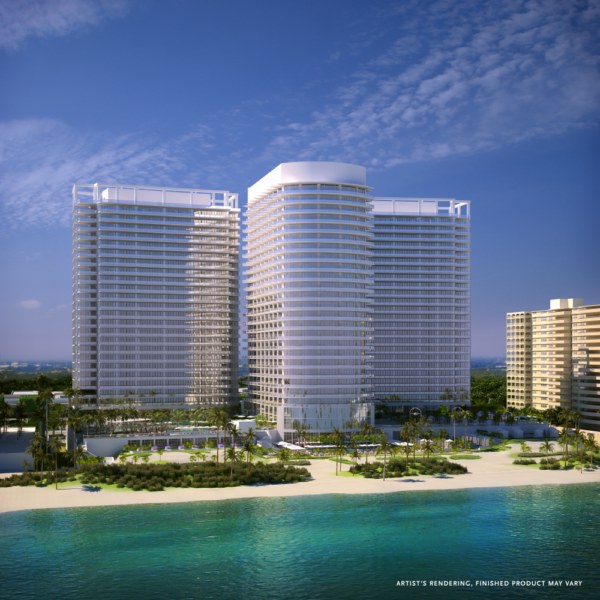 (Bal Harbour, Fla.) The St. Regis Bal Harbour Resort, one of the most ambitious mixed-use resort development projects in the Southeast, continues to progress on its construction timeline here in the highly affluent South Florida village.

Situated on an expansive oceanfront stretch that once housed a Sheraton hotel, the St. Regis Bal Harbour Resort is a five-star resort hotel and condominium aimed at delivering one of the most luxurious and graceful lifestyles in South Florida. According to a resort spokesperson, Starwood’s biggest-ever development is scheduled to top off the third and final tower in February, with construction expected to be completed in late 2011.

Each tower will have its own private lobby entrances, security, valet, and covered parking, as well as access to a variety of St. Regis Hotel services. The signature St. Regis Butlers will offer white-glove service, from 24-hour in-room dining to pet pampering, while the 12,000 square-foot RemèdeSM Spa will provide the ultimate spa experience and state-of-the-art fitness center.  Everyday indulgences will also include fine dining restaurants, childcare, and poolside cabana and beach services.  Special imaginative elements will be the serene gardens and sculptures with decorative fountains and pool features, as well as a premier selection of works by world-renowned artists.

One of the most distinguished neighborhoods in South Florida, Bal Harbour Village sits at the northern tip of Miami Beach.  An oasis of affluence and indulgence, Bal Harbour is a favorite destination for many jet-setting visitors and seasonal residents.  The property is situated directly across from the fashionable Bal Harbour Shops, one of the world’s most renowned shopping venues.

(New York, New York) – Donald Trump did some Christmas shopping on the golf course, walking away with two new courses to his growing golf empire. Both of the courses Trump purchased were previously owned by Empire Golf, a well-known developer and operator of upscale courses in the Mid-Atlantic region.

Pine Hill, designed by world-renowned golf course architect, Tom Fazio, is an award-winning course on southern New Jersey’s highest point. It is located near the highly exclusive Pine Valley Golf Club perennially ranked as one of the top courses in the country.

Branton Woods and Pine Hill cost approximately $45 million each to build, according to the Trump Organization, and took years of permitting approval to get built.

“These two courses are each considered among the finest in the country and I am proud to add them to my growing list of clubs,” said Trump, whose organization now controls 11 courses open or in development around the world. “Today, they would be virtually impossible to replicate from the

Earlier in the year, Trump acquired the highly acclaimed 850-acre Lowes Island golf course development, a 36-hole facility that fronts three miles on the Potomac River near Washington, D.C.  At the time, Trump said all of his clubs have been “spectacularly successful and, despite the recession, membership is thriving.”

The purchase prices for all three developments were not released.