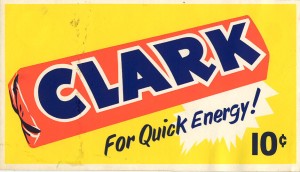 One of the great privileges of child-rearing is what I call the Transportation Effect, whereby adults, in playing or otherwise communing with their kids in an appropriately committed fashion, are transported back to a time in their own lives when, say, erecting the most efficient Hot Wheels match-race scheme was about the most engrossing thing imaginable.

Halloween, of course, with its attendant masquerading and confectionary trappings, transports like few other phenomena. A couple years back my fully transported mother actually demonstrated apple-bobbing to my children, full dunk and all — something she never did for my benefit during the umpteen Halloweens of my own childhood. But the point is taken: Hayrides, costumes, haunted houses, pumpkin carving… They’re all transcendentally nostalgic acts.

But they’re all secondary to the candy.

As I re-entered the Halloween scene in earnest, thanks to the growth of my young children (Silas, now 14, and Clara, 12), I was awed by the spring of candy knowledge that welled up inside me, from places deep in my subconscious. A few years back, when walking with my children Halloween night (and scamming as much candy as was reasonable for an adult), one couldn’t help but notice the surprising re-emergence of, for example, the Clark bar, that peanutty, soft-but-crunchy Butterfinger forebear. After plucking one from a neighbor’s bowl, I stood there on the street and stared wistfully at the little red package and nearly shed a tear — not because it was so very fun sized (an execrable euphemism; more on that later), but because I remembered a time when Clarks were “right there”, a legitimate option in the full-sized, 10-cent category at J&A’s in downtown Wellesley, Mass., circa 1974.

“What’s this Clark thing?” Silas asked me, without a scintilla of guile… Poor lad. He had no idea.

It’s this sort of benignly ignorant prompt that sends me winging back in time. Indeed, my kids’ questions serve as able catalysts. We were in Cloutier’s, a local convenience story, the other day when Silas, the more adventurous eater of the two, pointed to the Charleston Chews and expressed curiosity.

What’s this? Never had a Charleston Chew? Well, that won’t do.

No childhood is complete, after all, without a working knowledge of the Charleston Chew’s stupendous, metabolic duality. I bought all three (chocolate, strawberry and the ever-underrated Vanilla) and we shared a third of each. Then we went home, froze the remainders and, 40 minutes later (any sooner and the effect isn’t complete — the stuff you remember!), we all experienced the crackling-hard but ultimately chewy, half-eaten Charleston Chew. Their first time! And I was there to witness this tri-lateral genius.

I related this story to a group of late-30/early-40somethings at a cocktail party shortly thereafter and a woman interrupted me halfway through. “Wait,” she said urgently, “where did you find Charleston Chews?”

“Get OUT! I thought they were gone forever!”

I bought three more that week and figured I’d leave them on her doorstep, but the kids and I ate them instead.

Thanks to me, I suppose, my children have developed a healthy appreciation, not just for candy, but for candy history. They really want to know what I enjoyed as a kid; I am duly transported and we’re all amazed at the volumes of my candy-related recall. 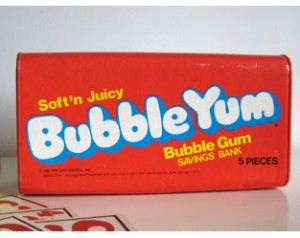 Bubble Yum was the source of mass hysteria among the pre-teen set upon its introduction in the mid-1970s.

Silas and Clara were floored to learn, for example, that Starburst haven’t been around since time immemorial. Indeed, I remember their introduction some time during the mid-1970s. Skittles came later, I tell them, and the rest is history… They were fascinated to learn of the great Bubble Yum Run of 1974, when this vast improvement in bubble gum technology first hit the streets, creating a new state of the art and sending 9- and 10-year-old boys scrambling all over town to buy up the few available test packs… With no real knowledge of inflation, the kids are goggle-eyed at the idea that candy bars used to cost just a quarter. “That’s nothing,” I tell them. “I remember paying 7 cents for a Baby Ruth at Bernie’s, Montclair, New Jersey, as late as 1971.”

“That was the candy story your Aunt Janet and I used to walk to when we lived in New Jersey.”

“You walked to the candy store? It was that close?”

I don’t have war stories. This is all I’ve got to pass on to later generations.

Another example of limited edition candy marketing, and a good one. Dark beats milk in almost every case.

Keeping it all in perspective and not falling utterly prey to nostalgia, I tell them they’re fortunate to live in a time of unprecedented candy innovation, an era when most everything that was any good still lives (save the superb Milk Shake bar I coveted as a 6- and 7-year-old but haven’t seen since). What’s more, we live in an era when candy purveyors, in search of gimmicky limited-edition sales, apparently, have dreamed up some new and exciting twists on old favorites. Some fall flat, of course (the craven “Inside Out” Reese’s Cup), but have you checked out the dark-chocolate Kit Kat? Stunning.

If you haven’t seen or dared try the Pina Colada Almond Joy (with white chocolate), please take my advice and get thee to a participating convenience store post haste.

The irony here is that I’ve become, in my advanced age, something of a candy snob. Most mass-produced American milk chocolate tastes waxy to me, and I’m continually disappointed by the unpopularity of dark chocolate, which, in my view, is vastly superior on its own and would, if substituted for its milky cousin, improve almost any candy product you can name. Moreover, my mother passed on to me a love and appreciation for fine, pectin jelly beans. As a result I look down my nose at these newfangled “jelly bellies” with their foppish, speckled shells and their contrived flavors. Buttered popcorn indeed. What utter dross!

But my candy past, especially as it rushes back to me in middle age, is almost completely middlebrow and unashamedly so. If I ate it as a kid, I’ll eat it now, with nearly the same abandon and ardor — though I draw the line at Jujubees and Chocolate Babies, the two candies my paternal grandfather always had on hand. Jujubees, you’ll recall, are horrible things, the concoction of some perverse confectioner whose sole contribution to the genre, it would appear, was an item that never gets stale because it starts out that way. Chocolate Babies? Does anyone even remember these things beside me and my siblings? They were vaguely Tootsie Rollish in taste and texture — and shaped like small, brown, human fetuses! Possibly the most grotesque candy product this side of Crunchy Frog.

The inimitable Chocolate Babies: One has to wonder what Project Rescue would have to say about this, erm… confection.

With little prompting, I think you’ll find that most adults have candy histories as wide-ranging as my own. Late on Halloween night one year, Silas and I arrived at our neighbor’s place for one final stop. Field and Suze had company but they kindly invited us in, promptly served Silas a piece of apple pie (to go along with the Snickers, Milky Ways and Three Musketeers they had on hand for the occasion), and poured me a glass of wine. We sat by the fire and conversation soon turned to the candy, as we all agreed that Three Musketeers was the most overrated candy bar on the planet. So boring. Salvageable only when frozen (the new limited edition mint version is actually an improvement).

I offered that Milky Ways were only slightly more interesting, and isn’t it funny that the mere addition of peanuts can turn a worthless bar like Milky Way into the sublime tour de force that is a Snickers?

Well, Field rejected my whole premise, maintaining there were great differences between the Milky Way and Snickers. No, I countered, a Snickers is merely a Milky Way with peanuts. He couldn’t accept this, and so proposed the only reasonable course of action: a side-by-side surgical procedure and examination of the candies in question. With great solemnity he proceeded to the front door, snagged both items from the bowl, unwrapped them, sliced them open and studied the evidence. Eventually I was proved correct. Never underestimate the transformative power of a peanut. 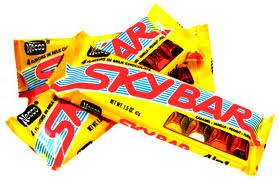 Sky Bar, a New England Candy Co. (or NECCO) product and probably its finest. Not hard to best the execrable NECCO wafer, however.

Back in front of the fire we moved to other subjects of interest: The relatively recent introduction of the Snickers Ice Cream Bar, which reproduces the Snickers taste and integrates an ice cream element with genuine aplomb; the superb new Milky Way Dark, the answer to my prayers; and even the quirky, four-compartment Sky Bar, which has somehow survived into modern times. We agreed those Sky Bars now on shelves may well be the same ones we spurned as 10-year-olds.

“Field tells me you’re a writer,” one of his guests remarked at one point.

“Do you write about food?”