In Italy it’s the art of living, rather than making a living, that matters. On one of my first visits to Italy many years ago, before I could understand any Italian, I was served lunch with a group mainly of Romans at a splendid villa on the outskirts of the city. Like educated people around the world, all of these Italians spoke excellent English, and I felt embarrassed by my doltish American monoglottism. Italians also have great manners, so they politely spoke English to include me, and kept the topics simple.
Then lunch was served, and an intense debate in rapid Italian broke out. After a few minutes my friend, Luca, paused to apologize “for speaking Italian.” I said, “Luca, you’re in Italy! What other language should you speak? It is I who should apologize.”
A lively flow of melodic Italian resumed for several more minutes. Upon its abrupt conclusion Luca’s buddy, Vittorio, placed his hand and my arm and leaned in to reveal what had everyone so agitated. I would have guessed, given its vigor, that the talk was about the state of the Italian economy or a political scandal, but instead it was about something that really mattered. “We think the prosciutto is cut too thick,” Vittorio confided, “and the melone is not properly ripe.”
Since then, though my Italian has only marginally improved, I have come to love the Italian approach to life. It has a sweet contentment in its appreciation for everyday things. If I believed in reincarnation my goal would be, could I not return as a maharajah or someone grand, I would get in line to be an Italian baby.
Which brings me back to Luca—Luca Valerio, founder and President of Parco di Roma Golf Club, is one of the few genuine visionaries in an industry which may pride itself on tradition but sometimes acts as a mere keeper of the flame. There was an article in the Wall Street Journal this week about the benefits of “golf only” clubs, whose members don’t have to pay for swimming pools and tennis courts or, Heaven forbid, a women’s locker room. The only question is, when these middle-aged men tumble into decrepitude, who’s going to play golf? Who’s nurturing the next generation of golfers?
In Italy, without question, it’s Valerio, who inaugurated a program for kids from the very moment he opened Parco di Roma in 2000. In just ten years, he’s created the best junior golf program I have ever seen anyway, and it’s not a separate enterprise which segregates kids from the “real” golfers, but rather at the heart of Parco di Roma’s culture.
He provides free range balls “for the bambini.” They have full rights to the use of the course. There is a putting course, and chipping greens that are targets for shots coming from several directions at once. There are first-class teaching pros as intent on getting the club in the right position for a frisky six year old as they are for refining the swings of the club’s most prominent members. As I write this, sitting in the clubhouse at Parco di Roma on a frosty January night, I ponder what I have seen here over the last few days.
Despite what by Roman standards is bitterly cold weather, with freezes delaying play until at best mid-morning all week, the driving range is packed by 9:00 a.m., with pods of players assembling at the first tee. Kids are having putting contests, exuberant but controlled.
This is the benefit of a culture which loves having its children around. Tonight at dinner in the clubhouse—and in contrast to the American clubhouse dilemma of food and beverage acting as an endless drag on revenue—there were family groups of three generations scattered among the couples of groups of friends dining, a normal event at Parco di Roma. If the kids love being at the course, they are unlikely to complain about having dinner there with nonna e nonno. Valerio’s approach to golf in Italy, both at Parco di Roma and in Milan, where he also managed a 36 hole club, has inspired a new generation of Italian athletes to look to golf for competition.
This is a subject I look forward to returning to, this issue of encouraging kids to play golf. Working in his office today, Luca had the Abu Dhabi Golf Championship, a European PGA Tour event, tuned in on the office flat screen. At the end of the third round, the Molinari brothers, Edoardo and Francesco—who also won Italy’s first World Cup of Golf at Mission Hills in China last November—were at 10 under and 8 under respectively, while Matteo Manassero, who merely won the British Amateur at 16 and then followed it up as low amateur in The Open Championship, managed to make the cut. There are great days ahead for Italian golf, and nothing has done more for the sport in Italy than Luca Valerio’s vision of a game that’s fun to play for children of all ages. 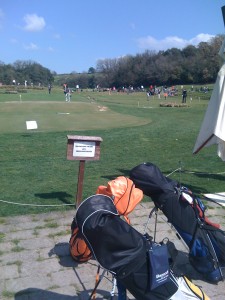