Last Saturday morning I arrived in Beijing after several days in Spain and Italy, lugging a suitcase full of polo shirts and golf caps to leave with a colleague in China so he can give them to clients and friends. I normally don’t check luggage, even when I’m gone for as many as three weeks, as on this trip. In the summer it’s especially easy to travel light, but I can manage with only carry-on any time of the year. But I checked two bags on the first four legs of this trip to get the gifts to China. I left the contents of the larger one with my colleague today and will fill it up with Chinese goods to schlep home later this week.

I was really pleased to get this stuff to China—a kind of homecoming, since it was all made here, but now it’s silk-screened with logos and looking sharp, an excellent Sino-American collaboration. After I delivered the goods I took a shower and then joined my colleagues in a meeting room to review our plans for the next ten days. 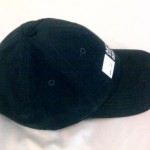 The shameful headwear, now on its way home: crisis averted.

Our Chinese employee, Jackson, said, “what about those green hats in Kirk’s suite?”

“I brought them from the States,” I said. “Something to give to clients.”

“Do you know about green hats in China,” Jackson asked, “what it means?”

The three gringos in the room–Kirk, Steve and I–shook our heads.  No one even had a guess.

“If a man wears a green hat,” Jackson said, “it means his wife is a treat.”

“Like she enjoys being with other men. It’s not a good thing.”

Now we got it.   But why, we all wondered, would any Chinese man ever wear a green hat if that’s the cultural message?

“Is it like a sympathy play,” Steve wondered?  A woman sees a guy in a green hat and thinks, “that guy is a sensitive soul and he’s suffering.  Maybe I can console him.”

“I don’t think so,” Jackson said, looking a little sideways at Steve.  “No one wears a green hat.  We can’t give them to anyone.”

We’re now trying to figure out how to make a trade with the our Russian colleagues, who have a lot of white hats left over from a trade show in March. I am feeling an abbreviated version of what I imagine George Bush might have felt like in the years after the “mission accomplished” photo op as US troops continued to suffer casualties in Iraq—like George, I thought I had done a good thing in hauling all those hats to China, but it turned out I had merely done a dumb thing. Where in the books on doing business in China does any expert caution against handing out green hats in China?

The lesson is, I suppose, that you cannot assume that you ever know anything in China unless you’ve vetted it with someone who really does know, and there are no innocent gestures in a culture with thousands of years of experience in mediating, calibrating, and measuring every aspect of human behavior. In the west we say, “don’t look a gift horse in the mouth.” In China, that’s the first place one would look—how can you assess the quality of the gesture if you don’t determine the value of the gift?

One Response to “Don’t Wear Your Eagles Cap in China”