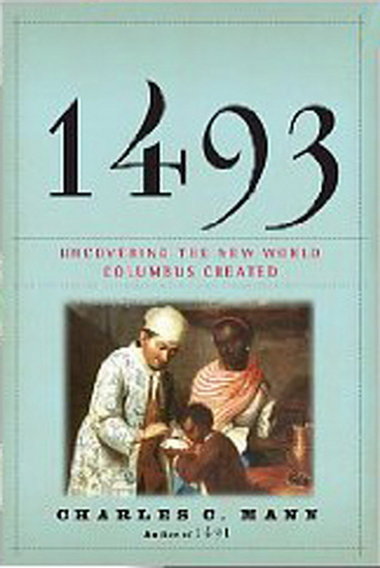 Charles Mann's "1493" Illuminates the Origins of the Global Economy

Apart from its misleading subtitle, Charles Mann’s  1493.  Uncovering the New World Columbus Created, is a book to celebrate.  (Columbus’ personal contribution to the creation of the new world Mann describes was roughly the same as Johannes Gutenberg’s to the invention of word processing.)    But Mann is using “Columbus” as a kind of synecdoche for the class of European explorers-conquerors-traders who did in fact inaugurate the process of globalization which created the world we now inhabit.

1493 is a bracingly persuasive counter-narrative to the prevailing mythology about the historical significance of the “discovery” of America.  Pious European pioneers subduing the wilderness to plant a city on a hill and all that.   It’s a companion to Mann’s 2005 study of the pre-Columbian world,1491, which examined not merely the civilization of the Americas before the arrival of the Europeans but the devastating effects of old world diseases among the people of the new world.

Summarizing a generation’s worth of scholarship on the complex effects of the mingling of the “old” and “new” worlds, 1493 carries on this line of enquiry by illuminating the political, cultural and biological ramifications of what Mann refers to as the “homogenocene”—the resurrection of Pangaea, the supercontinent, connected this time not by the slow grinding power of geology but by the sinews of commerce.

1493 is inspired by the work of Alfred Crosby, whose studies of the deeper biological effects of what he called the “Columbian exchange” were greeted with a yawn when he started publishing in the early 1970s, but whose brilliance and originality soon after would not only command respect among scholars but inspire a whole new field of enquiry—the meta-history of the environment.   1493, combining original reporting and research by Mann with a survey of the scholarship Crosby’s work stimulated, examines how the European encounter with the Americas, as well as its corollary, the yoking of Europe and the Americas with the continents of Asia and Africa, the latter through the cruel vector of slavery, profoundly altered the whole world.

Many Oregonians have vacationed in Zihuatanejo, Mexico, sunbathing and swimming along the Playa la Ropa.   What they may not know is that this “beach of the clothes” is named for the silk garments which washed ashore when a galleon bringing goods from Asia was wrecked by a storm.   Mann visits Manila to recount the complicated history of this trade between China and the west, fueled by gold and silver from the new world (mined and transported by African slaves), transshipped through Mexico on its way to Madrid, hauled across the Pacific between Manila and Acapulco on ships manned by polyglot crews.

Food crops from the new world were especially influential in the creation of the global economy, a story never told better than in 1493.   Everyone knows how important the Andean potato was to European agriculture—and the indispensible tomato to Italian cuisine.   The mid-19th century Irish famine, its effects still felt, is likewise a well rehearsed tale whose lineaments are incomprehensible without some knowledge of the biology of the Columbian exchange.   And given its grim effects—modern Ireland’s population is still smaller than its 19th century peak—one might assume that the Columbian exchange was deleterious.   Mann persuasively argues the opposite.

“Transplanting the potato to Europe and the sweet potato to China created catastrophic social and environmental problems,” Mann acknowledges.   “But it also kept millions of Europeans and Chinese from malnutrition and famine.  The huge benefits of moving species outweigh the huge harms.”

Even in the shadow of the most glamorous shops in Beijing, vendors grilling sweet potatoes add spice to street life, especially on cold winter days.

Astonishing facts accumulate throughout 1493.  Japanese samurai guarded silver shipments between Acapulco and Veracruz in the 17thcentury.  The samurai were exempted from the racial laws prohibiting non-Spaniards from carrying weapons so they could “wield their katanas andtantos,” as Mann writes, to fend off bandits.    By the mid-18th century, the militias guarding Mexico’s Pacific coast against British raiders were “a force of morenos, pardos…”—that is mixed-race Afro-Indians and Afro-Europeans, categorized by the colonizers in a hapless attempt to name every possible combination of genetic admixture over multiple generations—“…Spaniards and chinos, the latter mostly Filipinos and Fujianese.”

1493’s focus on Africans in the new world is its greatest contribution.   At the time Great Britain’s American colonies declared their independence almost three hundred years after Columbus’ landfall, more African immigrants had arrived in the new world than Europeans.    Most did not come voluntarily, of course, but once they arrived they collectively shaped (or escaped) the culture of the eclectic new societies they found themselves in.

They mingled with the native peoples, and with the Europeans—culturally, sexually, linguistically.  New world societies are so distinctive from European societies in part because of the African influence flowing through America’s cultures.  Americans have been reluctant to acknowledge this truth, in part because of the depth of American racism.   But writers, from Mark Twain to Ralph Ellison to William Styron to James Baldwin, have understood that America became as much an African as a European place, and Mann does more to illuminate why that is so that any popular historian before him has ever managed.

1493 is rich in detail, analytically expansive and impossible to summarize.  Reading Mann’s accounts of Africans forging bonds with native peoples throughout the Americas, for example, I thought about the Ramapough Mountain people in New Jersey, a so-called remnant population of mixed African-Indian-European heritage whose community has been destroyed by toxic dumping from a Ford Motor Company assembly plant.   (HBO aired a documentary about this history called “Mann v Ford,” although the plaintiff was not connected to Charles Mann.)   Reading 1493 showed a link between Henry Ford’s epic failed attempt to build an Amazonian rubber empire in the 1920s with the Ramapough’s futile battle two generations latter for justice in America.

1493 deserves a prominent place among that very rare class of books which can make a difference in how we see the world, although it is neither a polemic nor a work of advocacy.   Thoughtful, learned, and respectful of its subject matter, 1493 is a splendid achievement.