Economists have discovered over the last several decades that a whole lot more than simple financial self-interest drives our decision making.    Freakonomics is the name Steven Levitt and Stephen Dubner coined to describe this new field in a popular book explaining some of their findings.  Classical economics assumed that people always made rational choices, while the modern behavioral economists have discovered that people make decisions for all sorts of irrational reasons, even when they believe they are acting in simple self-interest.  The underlying theme of their work, Levitt and Dubner wrote, could be summarized in a single, simple phrase: people respond to incentives.   The job for economists was to understand the underlying mechanisms guiding peoples’ choices, even the ones that seemed crazy or stupid.

Another prominent practitioner of this new approach to economics is Richard Thaler, who wrote an OpEd piece in the NY Times on Valentine’s Day outlining how strategies based on positive reinforcement—versions of incentives—can produce real changes in people’s behavior.   One example Thaler describes is from New Taipei City in Taiwan, which faced the universal problem of dog owners not cleaning up after their pets.  “Owners who deposited dog waste into a special depository were made eligible for a lottery to win gold ingots,” Thaler wrote.  This “halved the fecal pollution.”

Thaler’s overall approach to governing is what he calls libertarian paternalism.   The libertarian part means people “should be free to do what they like.”    The theory underlying the paternalism part maintains that it’s OK for governments or companies to “try to influence people’s behavior in order to make their lives longer, healthier and better.”

So that brings me to golf and the curse of slow play.  Recently I was playing in Portland on a public course while we were enjoying a rare stretch of spring weather in January.   We play golf because it’s (mostly) fun, and because it’s a chance to spend time with friends and enjoy the aesthetic contentment of a day in a park.   But when the pace of play collapses into a pattern of hit and wait, the joy of golf is quickly sapped.   And that’s what happened to us that wonderful January day.   There were three guys in front of us who were clueless, taking endless practice swings before dribbling their Top Flights down the fairway, and then upon finally reaching the green, conducting putting rituals elaborate enough to make Ben Crane antsy.

By the seventh hole, we were all grousing and distracted and decided to quit after nine.   What should have been a really pleasant day instead was a disappointment, and all because the group in front of us had no idea that keeping up a reasonable pace of play is a part of golf’s etiquette.

At the PGA Show this year, an initiative to staunch golf’s decline called Golf 2.0 was launched.  (Gene Yasuda wrote an excellent piece on Golf 2.0 in the January 27th issue of Golfweek.)  Guided by research by Boston Consulting, Golf 2.0 is supposed to “retain core golfers, re-engage those who have left and create new players.”   Exactly how it’s going to do this is vague, but it seems to me that unless it addresses the underlying experience of golf—not just customer service in the pro shop, but how a typical round goes for the average golfer—Golf 2.0 is not likely to succeed.

A REMEDY FOR SLOW PLAY

Slow play is a deadly enemy of golf’s growth.   We already know that golf is a time eater, which is why the demographic is skewed toward older players.  But can we learn something from the approach of Levitt and Thaler and their colleagues that will help address the issue of slow play?   Are there other components of the golf experience that could be improved by providing incentives?

What if we put players on an actual clock when they started their rounds, and if they finished in four hours they could put their ticket into a lottery box for a weekly drawing for a free round.  An approach like this could help operators, too, because a faster pace of play means more rounds, and more rounds means more revenue.   Courses with a reputation for speedy play would attract more players, too.  Course operators are like produce dealers—their goods are perishable.  A tee-time not sold is permanently lost.

A CONTEST TO DISCOVER INCENTIVES FOR IMPROVING THE GOLF EXPERIENCE

What about taking care of the course?   Is there some way to encourage players to repair divots or ball-marks with incentives?  Could players take pictures with their smart phones of repaired ball marks to earn their way into a lottery?

In the spirit of incentives, let me start a contest here.   Send me your idea for an incentive that could improve the golf experience to me via email to john@theaposition.com/johnstrawn.   I will discuss the suggestions in a future post and send the author of the one I like best a signed copy of “Driving the Green.” 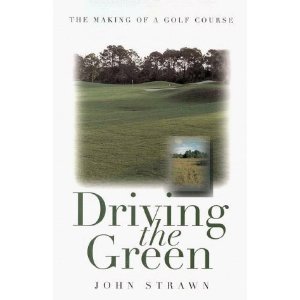