The Clicgear Cart is, as its website says, “the original compact three-wheel  golf pushcart.”   The Clicgear Cart won the 2007 Best New Product Award at the PGA Merchandise Show, providing a terrific promotional boost.  The cart has great word of mouth, too.  Two of my regular playing partners swear by it, in part because it’s easier to push a cart than to pull one, and we’re all dedicated walkers.   Setting up the cart and bag takes just seconds. 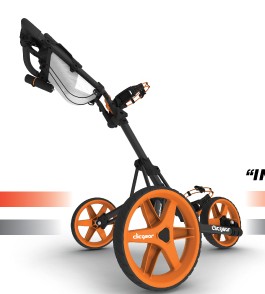 What’s unique about the Clicgear Cart is, in fact, how easily it can be folded up into a small, portable, and storable unit.  On Saturday, I saw ample testimony to Clicgear’s popularity when I was hanging out at Pumpkin Ridge’s Ghost Creek course in the wake of a long frost delay.   There were more than a dozen Clicgear Carts arrayed in front of the clubhouse and around the putting green.

A couple of dozen accessories are available for the cart, too, so every owner can customize his unit.  You can add a shoe brush (very useful in the Northwest), an adjustable umbrella stand, a cup holder and even a seat.  A couple of GPS holders are available, and one of them can be adapted for an IPhone, which makes it the perfect complement to Grow the Game Golf’s  scoring app.  Followers of the Golf Road Warriors’ Palm Springs and Reynolds Plantation trips are familiar with Grow the Game Golf—“GTGG”.   The GTGG app is especially suited to corporate outings and events.   With it, multiple foursomes can not only keep track of their own scores but see how all the other groups are doing in real time.   The Clicgear “View™ 3.0 Push Cart GPS Holder™” makes the GTGG app even easier to use by mounting the smart phone right onto the cart handle. 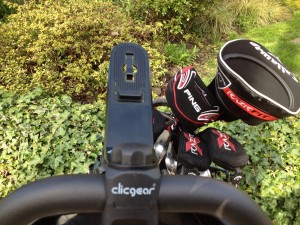 Clicgear is manufactured and distributed by the ProActive Sports Group, a golf products company based in Canby, Oregon, a small town near Portland.   Clicgear is the company’s best-known product, but it also makes and sells hundreds of other items, many of which are created in Canby.   A new ProActive product about to hit the market is a towel called The Looper, which I happened to notice at this year’s PGA Merchandise Show when I walked by ProActive’s stand.   It caught my attention because I have a friend whose nickname is “Looper,” and I wanted to get one for him.  Greg Freuler, Proactive’s Director of Product Development, told me In Orlando that the towel wasn’t in stores yet, but should be by spring.   We made arrangements to meet in Canby so I could tour ProActive’s facilities.

I finally managed to get to Canby last week, where Greg introduced me to company President Steve Skinner.  In a small conference room, Greg had set out samples of some of the prototypes they’d worked on  for new products, including the Looper.  Getting the hole that fits over the club just right was part of the challenge.  Same thing with the mittens that attach to the handle of the Clicgear in inclement weather.  Several generations of proto-mittens chronicled the process of invention.   The mittens needed thumbs, it turned out—the first versions were more like fat socks, while the final product not only lets your hands slip in easily, it has a pouch for a hand-warmer.

Steve and Greg told me the Looper, which like most golf gear is made in China, was just arriving via cargo container in Los Angeles, and would be in stores soon.  I talked them into giving me a prototype for my friend, Larry Colton, whose kit needs an upgrade to offset the decay in his swing.

ProActive also has a product line called Origins of Golf™, which offers a variety of trophies and commemorative gifts.  There’s a shop above the administrative offices where the bespoke products are customized for member-guests and club championships and even professional events.  A laser machine can create a three-dimensional image on a crystal trophy using digital instructions—almost as simple as using a printer.I discovered that ProActive also carries a couple of other of my favorite gadgets.   4YardsMore is my favorite tee.  Lasts forever, always set the ball at the perfect height, and seems to produce on its promise.  (Although my Callaway RAZR Fit driver has added so many yards to my tee ball that I can’t distinguish the tee’s effect so readily anymore.)

And then there’s Ka-Ching!™, a set of coins that add to the pleasure of any competitive match.   Last year at Chambers Bay, a caddy gave us a Ka-Ching!™ Birdie coin, which is a “+2,” telling us that whoever made the last birdie of a round would collect $2 from everyone else.  We’ve been playing that game now for almost a year, not realizing that the Birdie coin was an orphan from a ten coin set.  And there are good coins and bad coins—three pars in a row, for example, earns three points, while a triple bogey costs three points.   The beauty of the game is that coins can and do change hands, right up until the last green.  The coins also double as ball-markers.  I recommend Ka-Ching!™ to any regular foursome. 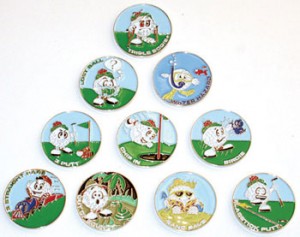 One Response to “The Clicgear Three Wheeled Golf Cart”