In 1921, Oak Hill acquired 355 acres of treeless, nondescript farmland near two existing golf courses, the Country Club of Rochester and Irondequoit Country Club.   Oak Hill commissioned the Scottish immigrant golf architect Donald Ross to design its two new courses, a natural choice given that he had designed the two neighboring courses, and was thus familiar with this local landscape. 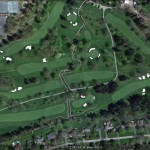 Oak Hill’s land was shaped like a bow tie. Ross sited the clubhouse at the knot. A branch of Allens Creek flowed north across the eastern half of the property, where Ross routed the East Course.  Thirteen holes were on or around the Allens Creek parcel. (Walter Hagen, America’s first great professional golfer, was born in a farm house on Allens Creek in 1892, not far from where Oak Hill would be built.)  Some fairways at Oak Hill run parallel to the Creek, providing at least the potential for strategic tee shots, but the holes Ross laid out perpendicular to the creek all use it simply as a cross hazard.

Pete Dye thinks Ross’s greatest skill as a course designer was in his routing plans.  In his introduction to Brad Klein’s biography of Ross, Dye noted that Ross “was the first designer to make the opening shot play one way, then switch the kind of play needed for the second.”  If the tee shot required a draw, Dye explained, then the second shot would require a fade.  At Oak Hill, Ross laid out the East Course in an unusual way: the front nine returns to the clubhouse, with the holes laid out around the perimeter of the easternmost land.  The 10th hole plays parallel to the 1st, as often happens, but a four hole loop inside the front nine has the famous par 5 13th returning to the clubhouse.  The 14th hole then heads south on a five hole loop, so the East Course returns to the clubhouse three times, with three “finishing” holes—9, 13 and 18.  These holes play in three directions: south on 9, west on 13, north on 18.   The “Hill of Fame” on the right side of 13 uses Oak Hill’s trees not just to define the fairway, but to honor great players.  The viewing opportunities from the Hill of Fame and Oak Hill’s clubhouse are matchless.

One and ten are similar holes: Allens Creek defines the eastern end of the fairways, and the approach shots are wedges or short irons.  Craig Harmon, the head pro at Oak Hill for the last forty-one years, does a great job describing all of Oak Hill’s holes in a video on the PGA’s website.  He says that both 1 and 10 should be “easy” holes for the pros as long as they drive the ball well.  Oddly enough, Harmon uses the word “easy” to describe six of Oak Hill’s holes, which is odd until you note the caveat “if you drive the ball well.”  Harmon emphasizes the devious dips and slants of the greens, while observing somewhat matter-of-factly that success always depends on solid tee shots.  Oak Hill’s fairways are typically 24 yards wide, while the landing areas on some critical holes, such as 18, squeeze down to a mere 18 yards.  Harmon’s description of the holes is a great initiation into Oak Hill’s mysteries, while Terry Moore’s Q & A is an equally revealing introduction to Harmon, the quintessential club professional.

Allens Creek crosses the fairway at just over 300 yards from the tee on the 1st and 10th holes, both par fours. Since the average PGA Tour player’s drive in 2013 is 287 yards, players will have only a short-iron approach shot to these greens, and may not hit driver off the tee.  The cross hazard, in other words, has no real impact on PGA Tour-level players.  Harmon barely mentions the Creek in his analysis, and that’s because it’s not really in play.  1 and 10 are two of only four holes on the East Course that play in an east-west direction.  Twelve of the East course’s par fours and fives, on the other hand, play north or south, so there is less overall variety in the orientation of the holes than one might think.    The famous Ross greens at Oak Hill provide the gravest challenge, along with an element that was never part of Ross’s plan—the hundreds of trees that give Oak Hill its modern identity.

Ross learned to play golf at Royal Dornoch in northern Scotland, a classic links course with no trees. He then tutored as a club-maker and greens keeper with Old Tom Morris in St. Andrews.  Links-style courses were always the source of inspiration for Ross’s designs.  The so-called “park-land-style” course, which Oak Hill evolved into, was pioneered in England, where the first golf courses outside of Scotland were built in the 19th century.  But when Ross designed the East Course, trees were not in his plan, and he laid out a pair of courses which in his mind’s eye resembled the links of his boyhood, not what Oak Hill would become.

Park-land courses introduced two new types of hazards unknown to links golf: trees and ponds or lakes.  These would come to define American-style golf courses, reaching their epitome in the creation of Augusta National. Alister Mackenzie used trees and water hazards to brilliant effect at Augusta, while at the same time insisting that his inspiration for its design was the Old Course at St. Andrews, which is defined above all by its commodious fairways and the infinitely optional number of routes from tee to green.  There are optimal routes most days, depending on the wind, but I once hooked a drive so bad on the second that it bounced off the stonewall along the right side of the Road Hole, and I still managed par.  But a drive like that at Oak Hill would mean doom, for reasons Ross would not have anticipated.   Modern park-land courses, especially when they’re set up for major championships, require consistently long and straight drives.  The winner this week at Oak Hill will miss very few fairways—scrambling is not really a viable approach to success on a tree-lined course.

When Ross designed Oak Hill, he focused his energy on the greens, which are small, elevated, and undulating.  A classic Ross green requires a precise approach shot; if you miss, the ball spills off the green into steeply-banked catchment areas, and requires a delicate chip or pitch back onto the perched green surface.  Harmon doubts that even the great players competing in the PGA Championship will be able to get up and down at Oak Hill.  All of Ross’s great courses—Oakland Hills, Pinehurst #2, Inverness, and Seminole, for example—were designed with this style of green, the most distinctive among the great course designers.  Seminole’s greens have been described as “turtle backs,” although Pete Dye, a Seminole member, insists they no longer resemble the greens Ross originally designed.  Even Pinehurst #2, Dye insists, was modified by top-dressing and other maintenance practices that inadvertently, over a long period of years, altered the green surfaces.

A prominent member of Oak Hill, according to the club’s history, “concluded that Ross’ wonderful designs would be enhanced by trees,” so starting in 1926, Dr John Williams planted literally thousands of trees to “enhance” Oak Hill’s landscape.  The members thought a treeless golf course was “cheerless,” which was doubtless the mood Scottish golfers expected their courses to convey, however offensive Americans may have considered gloomy golf to be.

Golf course architects have a complicated attitude toward trees.  Trees provide beauty and shade, but they can overwhelm the strategic intent of the original design, especially as they mature and their canopies intrude into the line of play. Trees can make it difficult to grow healthy turf, competing for nutrients, water and light, which is why courses such as Oakmont, Riviera and Waverley Country Club, among others, have recently embarked on tree removal plans, sometimes over the strenuous objections of members, especially the ones who remember Joyce Kilmer’s kitschy paean from junior high. A tight, tree-lined course can provide a great test for the world’s best golfer, but it also strictly defines the way each hole must be played, eliminating strategic decisions.  Oak Hill is such a course.

Ross’ original East Course design was not only modified by the introduction of trees, it was also remodeled twice—first by Robert Trent Jones, who grew up in Rochester and said that he “caught the architectural bug while watching Donald Ross design” Oak Hill, in 1956 and 1967; and then in 1979 by George and Tom Fazio, who had the audacity to eliminate one Ross hole entirely, shorten another, and create a new short hole, the present 6th.  Jones first measured average drives at the 1956 Open, stationing his sons along the fairways to run out and compute the lengths of the drives.   After the Fazio remodel, the original Ross-designed 5th hole, a beautiful par 3, would sit forlornly in the far northeast corner of Oak Hill, an orphan of the alteration.  The current 6th is a Fazio hole.  Tom Weiskopf was so offended by the Fazios’ changes to Oak Hill that he jokingly suggested that defenders of classic courses should carry guns to scare off any future attempts to change them.

When the 1956 US Open was held at Oak Hill, the oaks Williams had planted were at most thirty years old.   Even when Trevino won in 1968, the trees were barely forty, so their canopies were modest compared to today, given that oaks can live hundreds of years and reach their maturity slowly.  Oaks in forest tend to grow taller, while individual oaks in open terrain tend to be shorter but with broader canopies.  The trees dominate the views from the tees, and lock into the minds of the players.  The drives the thing, even if it’s hit with an iron, a hybrid or a fairway wood and not the driver.

Oak Hill is thus a hybrid course, combining elements of Donald Ross’s design, preserved mostly in his greens; an arboretum, which defines most drives; and the revisions by Jones and the Fazios.   Despite its complicated origins, it is a course revered not only by its members but by professional golfers.