The PGA Show is anchored by the big golf brands, which always make impressive showings.  Nike and Callaway and Taylor Made preen, their stands like fancy retail stores during pre-Christmas sales, full of eager shoppers looking at the latest fashions in clubs, shoes, shirts, putters, bags, sweaters and so on.

But lurking about on the showroom floor, announced by the modest display of samples at the new products showcase, are the not always obvious wares of the innovators, the imaginative and risk-taking bunch that pushes the golf industry forward, year by year and inch by inch.  The first time I saw a Soft-spike, for example, the company’s booth wasn’t much bigger than a card-table, and no one would have predicted that fifteen years later, the old nails-in-boots style of golf shoe would have gone the way of hickory shafts, much to the relief of every bunion-footed golfer on the planet.

So it’s the new stuff I enjoy looking at, even if it’s not earth-shattering, but just offers some improvement over what we mostly use or do now, or shows us a new way to think about some ancillary activity, like cleaning clubs while we’re playing (when we don’t have a caddy, of course.)

Mark Gonzalez of South Carolina played golf with an older friend who used to lay the face of his club against the front wheel of his “trolley” (as the Brits would say) as he walked to his ball, letting the moisture from the grass help clean the dirt off his club.  Mark thought of a better way to use the same available energy, designing a brush that would attach to the wheel of the push-cart, sort of like a hub-cap with a bottle-brush extension.  The brush would rotate as the wheel moved, and a player could put the club on the brush to clean the face.   When the cart was stopped, a player could run his shoe over it to clean his (soft) spikes.   He called his product the Cadet, had it made in China, and started selling it this year.  It attaches to any brand of push cart—you will probably use the wheel on the side you swing from—and attaches easily. 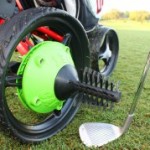 Ready for the Geese

The company’s website calls the “CADET a revolutionary golf club and shoe cleaning tool that lets you get your clubs ready on the way to the next shot.”   That’s a modest sort of revolution, but one I can support.  First, it encourages walking, which is essential to the long-term health of the game; and two, it should help keep the goose poop from gumming up your shoes.   This may not be a big deal to you, but if you play most of your rounds in Portland, Oregon, as I do, keeping goose droppings from accumulating on your shoes like wet clay on a rainy Georgia day means a lot.  In the interest of full disclosure, I want to say that Mark and his dad, Luis, who were manning their booth, gaveme a Cadet to try, so I am predisposed to like it, and hope it works as well as it looks as if it will.  I promise to update this report after I have had a chance to attach it to my Clicgear cart and try it out for a round or two this spring.  I know the courses will be wet and well saturated with goose gunk, so it will be a fair test.  And thanks, Mark, for the free sample.

I also saw a very small booth that had a pair of trousers draped over a washboard with a nozzle spraying water on them.  The trousers shed the water and seemed not wet at all, which Driwalk Director of Global Advertising Steve Treisman, an Aussie who also has his products made in China, says is an absolutely true representation of how his trousers and shirts perform in the real world.  The polyester fabric is very light weight and soft to the touch, and has the advantage over normal rain gear of looking like regular clothes—so you’re good to go if it’s dry, but you don’t have to start adding layers if a squall comes up.  I liked the look and feel of the fabrics, which Steve says he wears all the time.  The other advantage his clothes have, he says, is that they can withstand many more washing cycles—up to 100—than other fabrics claiming similar water-proof performance.  I really liked these “Driwalk Hybrid Performance” outfits and hope Steve finds a US distributor because I would buy and use them, assuming they’re made in big gringo sizes and not just the small-boy samples I saw.

Another product I saw kind of stretches the boundaries of true golf innovation, but I liked Pykamo for its optimism about the future of the game.  Created by Maurice Duhamel in Quebec, Pykamo is a light-weight, plastic molded set of children’s golf clubs that are designed to be used with a soft foam ball. He calls it “golf for everybody.”  It’s a way for kids to swing a club in the proper way but not to hit a ball through grandma’s front window.  It has a molded tee box and “hole,” and should be at least as fun as croquet.  Maurice also thinks it could be a great indoor recess activity in the schools, one of the few reasonable proposals I have ever heard for getting some version of golf into the PE curriculum.

Finally, there’s Tin Cup, a beautifully engineered device that lets you mark your ball with either a symbol already available from the company’s offerings, like the “big apple” or “hocus pocus” or “nine lives” or a hundred other options, or something of your own design cut into the stainless steel cup, with a rim that makes it look from above like a miniature conquistador’s helmet.  With a colored Sharpie, you take a few seconds on the first tee to imprint your ball with a unique signature, and hope that you don’t seed your course with too many examples of errant drives.  But for sure you’ll know which ball is yours when you find it in the rough.  An excellent product. 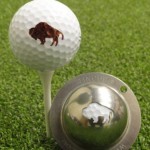 And as a post-script, I want to say a word about the custom shoe company, Tauer & Johnson.  Last year I bought two pairs of shoes from Tauer & Johnson, and I loved the fit.  But after I’d worn them with great satisfaction for several months, I had a problem with the sole.  I went to the company’s booth today (#3715) and told Lupita and Seth about what had happened, and without a moment’s hesitation they offered to give me a new pair.  I am a very happy customer, and am pleased to recommend Tauer and Johnson to anyone looking for a custom-built shoe with excellent design and manufacture.  They stand behind their work.

One Response to “The PGA Show 2013–What’s New and Interesting This Year.”