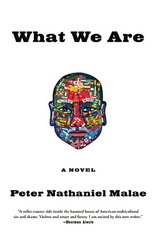 A writer as good as Russell Banks wouldn’t blurb a novel unless he believed in its author’s talent, so when Banks compares Peter Nathaniel Malae to “a young Nelson Algren or Richard Wright, one of those writers who can hit it out with either hand,” it raises a reader’s expectations.

But Malae’s novel “What We Are,” the object of Banks’ praise, is disjointed and uneven, more like bundled short stories than a novel. There are moments of manic energy in the prose, cascades of association flowing down the page. But there’s no plot, nor any dramatic tension.

The narrator, Paul Tusifale, the child of a Samoan father and a white American mother, is a seething, deracinated thug who lets us know on every page how smart and well-read he is, how sensitive and intelligent and superior to all the yuppies and do-gooders and businessmen — anyone, really, including his relatives — whose very existence annoys him. Fueled by self-loathing, Tusifale wanders guideless through his private circles of hell.

He gets in a fight early on, is arrested, goes to trial and thinks this of his jury:

“This jury is a reminder, the official stamp of my breakup with my fellow Americans. Today it’s a half-breed skeptic before a dozen assorted donuts who couldn’t say a word about me that matters. Couldn’t speak to why I love Johann Sebastian Bach and Tupac Shakur at the same time, polar opposites in bio and attitude, brothers in passion and pain.”

And so on. There is a hint of Whitman here, but rather than containing multitudes, Paul assembles tidbits. He is sui generis, beyond the ken of the ordinary mortals.

The supporting characters are foils for the narrator’s derision, caricatures rather than fully drawn portraits. All the action takes place in Tusifale’s head, the refracted observations of an unreliable narrator.

Tusifale has done a stretch in prison, though we’re never told exactly for what, so his hardening there is a reference point in the novel. (Malae’s first book, “Teach the Free Man,” was a well-received collection of prison stories.) He’s a peerless one-wall handball player, for example, expert at the prison game. He was a great all-around athlete in high school and won an appointment to West Point, though he sabotaged the physical so he wouldn’t have to accept it.

The narrative voice in “What We Are” is, nonetheless, echt-American. Tusifale’s picaresque may echo the trajectory of Holden Caulfield’s aimless day, but with a bad boy machismo in place of Holden’s ingenuous soliloquy. It seems fitting that Malae’s novel has come out in the season of J.D. Salinger’s death. “What We Are” also borrows from the restless vitality animating Jack Kerouac’s alter ego, Sal Paradise, in that other seminal novel of the 1950s, “On the Road.”

The narrator’s brio is both the strength and the weakness of “What We Are.” Maybe a Maxwell Perkins could have found the novel lurking in these pages, but as it stands, “What We Are” is, despite the hopes raised by Banks’ praise, a swinging bunt.

WHAT WE ARE
Peter Nathaniel MalaeÂ
Grove Press
$24, 416 pages

See the original review at: http://www.oregonlive.com/books/index.ssf/2010/03/fiction_review_what_we_are_by.html