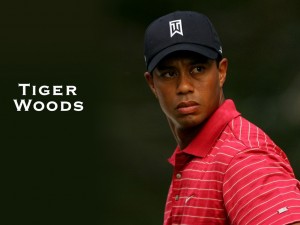 You Talking to Me?

Ewen Murray, a commentator on Sky Sports, was appalled when Tiger Woods launched a gob of saliva onto the 12th green as he kneeled to assess the line of his bogey putt and contemplate the emotional weight of yet another Sunday collapse, this time in the final round of the Dubai Classic.  “Somebody now has to come behind him and maybe putt over his spit,” Murray huffed.  “It does not get much lower than that.”

God forbid Murray should ever come to the USA and step foot in a Major League dugout.   Baseball players don’t merely spit everywhere on the diamond, a lot of them juice up their saliva with a concoction of tobacco and chewing gum, with the occasionally sunflower seed thrown in the mix for nutrition.   Some players keep up a more or less continual flow of sputum going, like little living fountains—sometimes aiming into their gloves, sometimes onto the infield dirt, sometimes onto the grass (or the Astroturf.)   The dugout floor acquires a kind of golden patina from the tobacco juice.  Players spit in the batter’s box, on the mound—just about anywhere there is room to let fly without actually hitting somebody.  (The great infielder, Robbie Alomar, crossed even baseball’s pliable boundary when he spit directly into an umpire’s face. 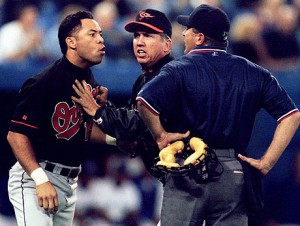 Managers inadvertently spit on umpires all the time when they’re questioning their judgment face to face, practicing the traditional art of the out-of-control tirade, one of the first skills they’re taught in manager’s school.)   And there are pitchers in the Hall of Fame whose speciality was–the spit ball.  Spit, throw, hit, field and throw–that saliva could travel from hand to hand to hand, especially in a double play.  And while players complained about not being able to hit Gaylord Perry, no one ever complained about what was actually on the ball, so far as I know.

Baseball players glory in grit, while golfers have a more fastidious approach to their game.   That being said, micturition on a golf course, whether discretely behind a tree or in a hazard is an acceptable practice for golfing men–and balls can roll in those places, too.  I’ve never played a round with a group when we didn’t hit some balls into places where the pros never visit—except, of course, to relieve themselves.  This doesn’t happen on TV, of course—there are strategically placed porta-potties for the players—but I guarantee you they use nature’s facilities when playing for fun just like every other male golfer.   I have never heard a complaint about someone urinating on a golf course, not even aimed at the guys who just kind of wander, unsheathe the equipment and piddle in the rough, casually as a hound.  So forget about the spit–nobody would notice, unless it was a real loogee on the green.

I wouldn’t want to putt through a big gob any more than Murray, but I don’t think Americans have quite the aversion to expectoration that the Brits do.  Some attribute this to an atavistic fear of spreading TB held over from early last century, and perhaps there is something to that.  But changing a people’s spitting habits is hard.  The Chinese have always been great spitters—practitioners of big throat-clearing calisthenics that gather up the goods.  During the Cultural Revolution, Mao sent out legions of school kids to humiliate old folks into giving up the habit of hawking phlegm onto the people’s streets and sidewalks.  When they spotted a culprit, the little policemen would surround him, draw a circle in chalk around the evidence, and write the person’s name next to it while the little comrades shouted anti-spitting slogans and otherwise did their best to humiliate the culprit.  Maybe the campaign had an effect, but I still see plenty of people hacking and hawking wherever I go in China. 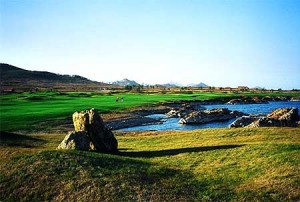 Golf is booming in China, and I think the sanitation practices on Chinese courses are going to resemble American practices more than the dainty approach of the Europeans.  I don’t think anyone in China would be shocked or surprised to see Tiger spit, even on a green.  And if they did find it offensive, they would be too polite to mention it to a guest.