[Aug. 7, 2012]– Jim Furyk’s meltdown on the 72nd hole at Firestone last week foreshadowed what we’re likely to see a lot of at this week’s PGA Championship on the Ocean Course on Kiawah Island.  Pete Dye knows how to plant fear deep into the heads of players even before they get to the first tee, and nowhere has he created more daunting challenges than at Kiawah.  We’re likely to see many replications of the sort of frantic stab at the ball that Furyk took from just off the 18th green last Sunday at Firestone from the players competing on the Ocean Course. 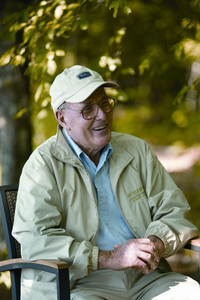 In 1990, I visited with Dye for several days while he was building the Ocean Course, where the Ryder Cup matches were scheduled to take place the next year.   Dye’s Stadium Course at PGA West in California had been expecting to host the ‘91 Ryder Cup, but because of the three hour additional difference in time zones, the European Tour, which manages the Ryder Cup along with the PGA of America, rejected a west coast venue.   Because the same development company owned both PGA West and Kiawah Island, it decided to order up a brand new course.

Golf course architects have been asked to design hundreds of so-called “championship” courses over the last fifty years—that mostly means  we’re expected to design a course measuring at least 7,000 yards from the back tees—but it’s very rare for an architect to receive a commission for a specific event, as Dye did for the Ocean Course at Kiawah.    And Pete was facing a very tough deadline.

The Ryder Cup  has been played on some great traditional courses—as it will be this year at Medinah Country Club near Chicago, which has hosted three US Opens and two PGA Championships—but it has also been contested on undistinguished courses selected for reasons having more to do with commerce than the prospect of great golf.   The Ryder Cup is a great driver of tourism, which is why developers in both Ireland (the K Club, 2006) and Wales (Celtic Manor, 2010) were willing to make the substantial investment required to acquire the Ryder Cup.

Dye’s challenge had been enlarged when a hurricane decimated Kiawah in the fall of 1989, just as the work was getting underway.  When we met, his crew was hand-planting dunes which had been stripped of all vegetation by the storm, trying to stabilize them with sea oats.   With advice from his wife and design partner, Alice, Pete had decided to raise the final elevation of the entire golf course rather than placing the holes down among the dunes, in more typical links fashion.   Excavating deep lakes and placing the fill across the site, Dye modified Kiawah’s hydrology in innovative ways, recycling storm water for irrigation while restoring wetlands.   In his typically practical way Dye, who has been the most influential golf course architect in the era after Robert Trent Jones, used the damage from the hurricane to justify changes that would have been impossible had the storm not stripped the site of trees and vegetation.

Unlike some golf course architects, who specialize in creating their designs at the drawing board, Dye did his best work down on the ground—literally.    Explaining how he figured out a way to restore Kiawah’s salt marshes, Pete dropped to his knees, as I recall,  pushed up a pile of sand and began to shape it as he imagined the wind and water would.   He used the same technique to show his crews what he wanted a hole to look like, creating a temporary miniature version of each hole in the dirt.  Although he had no formal training as an engineer, Dye had a kind of instinctive genius about how water moves across a site.   His enduring innovations derive in large part from his knowledge of water’s overall effects—whether as hazards, irrigation ponds, stream or storms—on the game of golf.

One benefit of lifting the course above the original height of the dunes was providing views of the Atlantic.   The downside was amplifying the effects of the wind, which was already a design challenge because it blew from everywhere rather than from a prevailing direction.   Architects always try to design with the wind in mind, but when the wind shifts, how do you make sure the holes still work?   Dye called his task at Kiawah building “two golf courses in one, since the direction of the wind could require a long approach shot one day, and a short one the next.”

And what about the greens?  Dye designed them in principle, he recalled, so they would be “receptive to all shots,” from a fairway wood to a wedge.   A true three-shot hole will normally have a smaller green than a par five hole that can be reached in two shots, but at the Ocean Course, there was a built-in oscillation caused by the shifting wind, so the green sizes did not conform to any rule, making the Ocean Course brilliantly unpredictable.   And if there is anything that makes pro golfers nervous, it’s uncertainty.  Think of all the times you’ve seen players step away from shots and toss bits of grass in the air, all the while studying the treetops, trying to fathom the wind’s effects.  At Kiawah, there will be even more turf-tossing than usual, given what Dye has done to collaborate with a fickle wind.

Dye completed the Ocean Course on time, and the 1991 Ryder Cup matches turned out to be among the greatest ever played, with the outcome in doubt right down to the famous final missed putt by Bernhard Langer on the 18th hole of the last singles match.  The course’s difficulty is confirmed by its course rating of 79.6 for championship play, with a slope rating of 155—the highest of any course in the USA, and perhaps in the world.

A new book on the 1991 Ryder Cup by Curt Sampson, The War by the Shore, recounts in chilling detail how the Ocean Course induced feelings of dread in the greatest players in the world.   Sampson shows how great golf design makes demands on the spirit as well as the body, and no modern course illustrates this better than the Ocean Course at Kiawah Island.     If the big boys thought Whistling Straits was tough, they’ll be looking for foxholes at the Ocean Course. 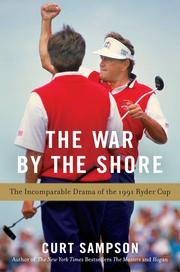 Curt Sampson, The War by the Shore: The Incomparable Drama of the 1991 Ryder Cup.  Gotham Books, September 2012.