Three years ago, the prospect of Tiger Woods melting down during a final round when he was in the hunt for a title would have been unthinkable.  He was the dominator, peerless in the lead.

Now, in the aftermath of his well-chronicled fall from grace, Woods can’t seem to hold himself together in the final round anymore, plagued as much by a balky putter as by his refurbished, inconsistent swing.   That he should founder at Pebble Beach, where he put together the greatest collection of rounds ever in a major championship (winning the 2000 US Open by fifteen shots with rounds of 65-69-71-67=272), made his collapse this year almost poignant.  It was like watching a great boxer who stayed in the game too long getting pummeled against the ropes.

At the AT&T Pebble Beach Pro-Am on Sunday, not only did Tiger lurch toward the back of the pack, he faltered while his chief rival, Phil Mickelson, put together by far the day’s best round, a clutch 64 that was three shots better than anyone else in the field.   Mickelson was splendid off the tee—using a new Callaway RAZR Fit driver—and flawless with his putter, while Woods was erratic from both tees and fairways and feeble on the greens, missing the kinds of putts he famously made throughout his career.

Woods finished the day tied for fifteenth with five other players, after starting the round in sole possession of third, four shots back of leader Charlie Wi.  (Mickelson started at nine under, six shots back of Wi, but finished at seventeen under.)

What’s really amazing is how poorly Woods played in relation to the field.  Sixty-eight players teed off on Sunday.   The median score for all players was 71, while fifty-three players shot 73 or better.  Tiger was one of seven players shooting 75, and only four players were worse than that—a pair of 76s, one round of 78, and the worst score of the day, Shane Bartsch’s 79.   So while Tiger was eleven shots worse than Mickelson, he was only four shots better than the day’s worst round.   It was not an encouraging conclusion to what had been three hopeful opening rounds.

So the questions about Tiger’s future remain: can he win again?   Can he resurrect the emotional strength that made him nearly invincible?   Can he putt well enough again to bail him out of trouble when his iron play and tee shots let him down?

Tiger is still the most important golfer in the world.   His charisma— the aura of his achievements, the prodigious arc of his success—transcends his current wobbles.   Icarus-like, Tiger flew very close to the sun, certain nothing could harm him.   Those puddles of wax dotting the fairways at Pebble are the residue of Tiger’s failed quest for immortality. 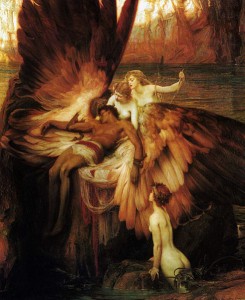 Charlie Wi and Ken Duke were in the final pairing Sunday, playing behind Phil and Tiger.   As they waited to hit their final tee shots on 18, Wi and Duke might as well have been playing a Tuesday practice round—no one was paying them any attention, even though Wi at that point still had a slight hope of making a playoff.  Wi was in fact more Tiger-like on this day, righting himself after a horrendous four-putt on one.  His third shot at 18 almost went in, and had Phil missed his birdie putt a few minutes earlier on 18, Wi and Mickelson would have met each other for extra holes.

The entire focus of the galleries and the media was on Phil and Tiger.   As long as he is playing competively, Tiger will remain at the center of the golfing universe.  But his game is in eclipse, not matter how brave a face he puts on it.