When Rory McIlroy was still an amateur, he visited Padraig Harrington’s house in suburban Dublin, where he eyed the Claret Jug.   “I’d really like to have one of those.”   He then glanced out the window towards Harrington’s practice grounds, maintained in the manner of a course on the Open rota.  “But if I can’t have the jug,” said McIlroy, “who would turn professional later that summer, “I would take that practice facility instead.”

Now, the reigning US Open champion owns a practice complex to rival Harrington’s.   And the link between these two great Irish golfers and their practice facilities is a Dublin company called Turfgrass Consultancy, which built and maintains these state-of-the-art practice grounds. 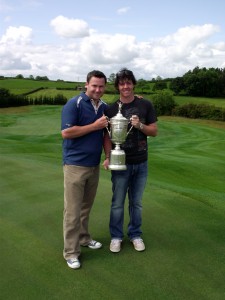 Harrington’s practice area was finished about eight years ago, though it’s been remodeled and added to since.   Harrington had a green built in imitation of the 13th at Carnoustie, with a severe slope running off the back.  “The harder the shot, the happier Padraig is,” says John Clarkin, founder of Turfgrass Consultancy (“TC”) and the first Irish graduate of Penn State University’s Turfgrass Management Program.   Perhaps Harrington had a premonition, or perhaps playing thousands of shots around that practice green gave him a psychological edge, but whatever the reason it’s perhaps not surprising that Harrington’s breakthrough major championship came in the 2007 Open—at Carnoustie.

The main green at Harrington’s is used only for chipping and putting.  No full shot carrying the vicious spin imparted by a top professional’s swing ever gouges a lesion onto Harrington’s green.   It’s kept smooth and flawless, and can be maintained at Stimp speeds up to 14.  “When Padraig does hit a shot toward that green,” Clarkin notes, “he always lands it on the fringe.  Always.”

A fairway for practice with longer clubs complements the short game area.  Harrington can hone in his distance at precisely calibrated targets.  A teeing ground built at an angle across the edge of his house allows him to pound drives into an adjacent field.  Harrington has never nicked the house, Clarkin says, although a mortal golfer surely would.

McIlroy moved into his new house in August of 2009 and commissioned Turfgrass Consultancy to commence construction of his practice grounds in March of 2010.  They were ready for use by the time Rory returned from this year’s first major at Augusta National.   McIlroy already had a design in hand of his own making, Clarkin says, but Turfgrass Consultancy suggested additional features to Rory’s liking.  “The links bunker was added,” said Clarkin, referring to the deep bunker Rory can be seen hitting bunker shots from on a BBC report filmed there in June.  McIlroy wanted as tough a practice test as any championship golf can provide, which would have to include the pot bunker from the 17th at St. Andrews.   “While the Road Hole bunker is about six feet deep, that bunker is seven feet and you can’t really see where the ball ends up.  Rory would need his dad stand on the green and report to him back down in the bunker on where his shots were landing,” Clarkin joked. 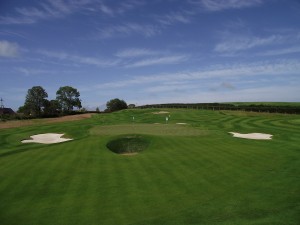 Rory asked TC to build three “holes”: one provides a downhill shot from 170 yards; a second is a 120 yard shot from a flat lie; and the last 110 yards from an uphill lie.  The target greens for these holes are in addition to the main practice green, which was designed to allow TC to replicate conditions on championship courses from all around the world.  The grass on the green surfaces is a mix of creeping bentgrasses and poa annua reptans, a cultivar cousin of the poa annua annual bluegrass that is variously treated as a pesky weed or accepted with a sigh by greenkeepers in cool climates everywhere as part of the family of grasses growing on their greens. This is the same grass that can be found on the greens at Pebble Beach.

The collars and approaches on two of the greens are fescue, while the others have a mix of creeping bentgrass and ryegrass, enabling TC to prepare a practice ground “for every turf type imaginable—excepting Bermuda, of course.”

TC built Rory’s greens according to USGA specs and installed SubAir systems to make sure the greens remain dry and firm, given that  it does rain a bit in Northern Ireland. “The main green is about 650 square meters,” Clarkin says, which is an average green size on a tournament course.  “The other three greens range from 250 to 300 square meters.”

Greens can be fast without necessarily being firm, Clarkin says.   McIlroy wanted to practice on greens with the firmness of Augusta National’s famously taut putting surfaces, where the ball lands with a distinctive ring tone that distinguishes a firm green’s sound from the gushy plop a soft green makes.

“It may have cost him hundreds of thousands of pounds,” the BBC reported, “but McIlroy admits this unique golf range has given him an extra edge and shows his commitment to Northern Ireland as a base.”

“To have a practice facility at the back of my own house is incredible,” McIlroy said.  “It was done as an investment in my future.   Since I got it built I have won my first major, so it has paid for itself already.  It is a long-term commitment to Northern Ireland, I see myself always living here.  It would be a shame to leave it, you couldn’t do it anywhere else.”

The key to maintaining consistent Stimp speeds, Clarkin says, does not depend on the height of the cut, but rather on a regimen of both cutting and rolling the greens on a frequent and regular basis.  “Whether they are rolling 11 or 14, we’re mowing at the same height, but to get them really fast we’re rolling often. Topdressing and using the Subair will help to increase speed, too”

TC has two full-time staff on site at McIlroy’s practice ground, and a full complement of equipment to maintain the greens, the fairways, the collars and rough and the bunkers.  The Road Hole bunker has sand from Portrush, McIlroy told the BBC film crew.   The other bunkers, Clarkin says, have either the type of sand the USGA typically wants in the bunkers on its championship courses—a firm sand with particle sizes that resist buried lies and drains well—or the local “rabbit” sand, a finer grained type often found on Irish links courses that is incredibly firm because its small particle sizes pack easily but can make hitting heavy explosion shots risky.

Clarkin, whose grandfather was Lord Mayor of Dublin, consults on new course projects and course preparation for championships around the world.  He was an agronomic advisor to the Robert Trent Jones II design team at Chambers Bay, the publicly-owned links course in Washington State which will host the US Open in 2015.   McIlroy calls Clarkin “The Gardener,” pleased with the work of the man whose company has helped McIlroy prepare for his ascent to the summit of the golfing world.

Many American touring professional golfers live in Texas and Florida and elsewhere in the Sun Belt, where tax laws are more attractive and there is the promise of year-round outdoor living.   But fewer varieties of grass can grow in warm climates, and the so-called “warm season grasses” have different playing characteristics from the fescues and bents and ryegrasses which flourish in cooler climates.   Bermuda greens are grainy, bermuda fairway lies are spongy and the rough can grow as bristly as a wire brush.   Practicing on warm weather grasses may be putting the players who live in the southern USA at a disadvantage.   Unlike McIlroy and Harrington (and Graeme McDowell and Darren Clarke), the Americans practice on turf quite unlike the surfaces they will be competing on in championships.

Despite its northern latitude, the climate of Ireland closely resembles that of the Pacific Northwest, where similar grass types flourish.  Oregon, in fact, has long been the center of the grass seed industry in the US, and the creeping bentgrasses and fescues on thousands of golf courses started as seed in a Willamette Valley farm field.  Belfast is at 54 degrees latitude, slightly north of Edmonton, Alberta.   But the moderating effect of the ocean currents off its coast provides Ireland with a relatively mild winter season compared to inland Canadian cities on the same latitude.

On a typical winter day in Ireland (although there’s never been a typical day in Ireland), the temperature will be in the 40s, much as it is that time of year in Portland, Oregon, which is just north of the 45th parallel.  (For those of you who are geographically challenged, the distance from the 45th parallel to the 54th is around 550 miles.)    Belfast’s average rainfall is 34 inches—again, comparable to famously rainy Portland’s 35, but much less than Miami’s 55 inches or Houston’s 53.   But the mild persistent rains in Oregon and Ireland provide the green and embracing landscape that its residents love—and the perfect conditions for growing turf grass.  The players who winter in Ireland, choosing to be among their friends and family, may have a distinct advantage in preparing for the next season because they can practice on turf and greens exactly like what they will find on the championship courses in the US and Great Britain.