Larry Colton has a new book coming out next month, one he’s worked on for almost ten years.  Called No Ordinary Joes, it’s his fourth book and, unlike the others, doesn’t rely on Larry being a participant observer in the events he’s writing about to drive the narrative.  No Ordinary Joes is about a group of men from his dad’s generation, the guys who fought WW II.  I read an early draft, and was moved by it, and over the last couple of weeks have read the final version, which I think is superb.

All of Larry’s books have been about small groups—fraternity brothers, basketball teams, and now the crew of a submarine.  Perhaps because of his own background in team sports—he had an espresso in the big leagues and played baseball professionally for six years (seven if you count his summer with the Portland Mavericks)–Larry understands the dynamics of a small group.  He recognizes the signs prefiguring conflicts, he appreciates how losing can plant a kernel of bad karma and destroy harmony, and he knows how leaders can emerge in a crisis.  He paid a price to acquire this knowledge, riding buses in the boonies for endless hours in the minor leagues as a kind of clandestine anthropologist.  He’s put what he learned to excellent use as a writer, moving from an introspective gaze to a broad and detached analytical perspective.  But in offering up this praise to No Ordinary Joes, I must confess that I am not a disinterested party—Larry’s my amigo, and if I thought this book was bad I wouldn’t be saying anything about it.

Over the last forty years, I have spent more time with Larry than anyone not related to me.  We’ve watched each other’s kids grow up, commiserated about marriages, whether enduring or disintegrating, and celebrated the arrival of our grandchildren.  We’ve followed oblique career paths, each going our own ways but never so far into the woods that we couldn’t hear the other’s whistle.  We’ve dead-ended and back-tracked and yet somehow managed to find our mutual ways forward.  Nothing has ever interrupted our friendship.

We’ve also played hundreds of rounds of golf together, plodding along innumerable fairways, often in despair as our games have melted away over the years, oozing out in a demoralizing arc from respectable to mediocre to miserable.  We enjoy each other’s company, but we don’t have discussions when we’re playing—we’re both too preoccupied with this irritating and irreversible deterioration of our golf swings and the delicacy of our emotional states accompanying it to focus on anything but ourselves.  In this sense, at least, we’re like real athletes—we’re in the moment. 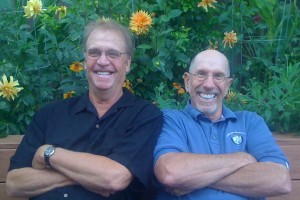 What we have in place of conversations is parallel monologues.  It’s not babble–we don’t speak at the same time.  We listen to one another, but we just don’t respond in the ordinary way of listening and answering, the old give and take.  We concentrate on the give.  I talk about what’s on my mind and Larry talks about what interests him.   Larry always makes me laugh, and I have never once been bored by what I am hearing, even when it’s not for the first time.   What mostly interests Larry is also Larry, so our curiosity about this particular subject coincides.  Besides, listening to Larry talk is like hearing Tony Bennett sing—what, you wouldn’t want to hear “Once Upon a Time” again?  Larry’s cycle of stories about the life of Larry is filled with all the elements of classical myth—great tests and abject failures, feats of recovery and the resilient bounce of hope and always, perpetually, heroically, a good laugh at the end.

Larry plus narrative equals what I call the larrative, which is the evocative and lucid report from the battlefield of the endlessly fascinating, complicated and admirable life of Larry Colton.   I am really glad that I have had the privilege of being around Larry all these years, even though sometimes life has dealt some lousy blows.  But that’s what life is, right?  It’s how you handle it that matters, and no one I’ve ever known is more resilient, uncomplaining and  droll than Larry.  He may love himself, as we all should, but Larry’s lesson is that humor can keep the hounds of narcissism at bay.  Larry likes to act uncomplicated, but he’s not.

I have watched him evolve from a recovering jock ex-high school teacher trying to find a voice for his first published piece of journalism to one of America’s most accomplished writers of literary non-fiction.  He’s had success for sure with his last two books: Goat Brothers (a main selection of Book-of-the-Month club, a quaint institution back in the day when people bought books printed on paper); and Counting Coup, a report of the year he spent in Hardin, MT, watching the high school girls’ basketball team, half white, half Crow Indian, try to win the state championship, which won an award as the best e-book of the year, but alas, a decade before the invention of the Kindle.

No Ordinary Joes grew out of an unlikely request by a financial supporter of a wonderful foundation Larry founded, Community of Writers (COW), his response to local school districts around Portland cutting funding for the arts.  He raised money to run writing workshops for teachers and then to place working writers in their classroom to help students do projects ranging from journals to newsletters to poetry and song-writing.  Larry created this program from scratch and fury, found a way to fund it (mostly by begging a lot of really nice people in Portland who have money who also like Larry to fund his idea), and ran COW until it was time to start writing again.  No Ordinary Joes was a book he needed to get back to.

The project started when the donor asked Larry to look at a manuscript written by an uncle who had served in WW II.  This is the kind of request writers dread and have to resist if they’re ever going to get any work done, but given that Larry was wearing his COW hat when the request was made and already had his hand out, he wasn’t in a good position to make a fist when the pages were proffered.

The manuscript was brief and not particularly well-written, but it conveyed the outlines of a chilling and gripping tale: a WW II American submarine sunk, its crew captured by the Japanese and forced into slave labor, but not before their families and friends have been informed that the men are missing and likely lost.  Giving it context as he builds towards its complicated finale, Colton tells this extraordinary story in No Ordinary Joes.  The epic tale of the USS Grenadier will linger in obscurity no longer now that Colton has given it form.  The handful of survivors alive to read No Ordinary Joes deserve the gratitude and praise of their countrymen, even if it has been late in coming. 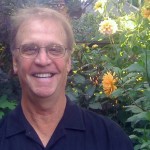 The book officially launches in early October, with a party at Wordstock, the literary festival that is another Colton contribution to Portland’s cultural life.   Originally conceived as a fundraiser for COW, it now has a life of its own, and it’s fitting that this year Wordstock will celebrate Larry’s wonderful new book as a centerpiece of the literary banquet.

Jack Ramsay, coach of the one Trailblazer team to win the NBA championship and another legendary Portland character, was a Navy Seal in WW II.  Jack and Larry became friends when Larry was writing his first book, Idol Time, a chronicle of the Trailblazer’s championship season of 1976-77.   Knowing that he was a naval veteran of WW II, Larry sent Jack the uncorrected proof of No Ordinary Joes, which Jack read over the next two days, dazzled by what Larry had written.

Now Jack is coming to Wordstock to share the stage with Larry and Tim McCoy, one of the main characters of No Ordinary Joes and a true hero of the Grenadier’s grim saga.  Their reunion comes during a difficult time, when America isn’t in much of a mood for celebration.  But men like Jack Ramsay and Tim McCoy, annealed by the toughest forms of competition, set a timeless example for all of us of what determination and purpose can achieve.  And Larry, too, despite his habit of self-deprecation and his aw-shucks shtick, deserves his place with them as a person who has struggled energetically and with great conviction to build a society that will take its arts as seriously as its wars.

No Ordinary Joes: The Extraordinary True Story of Four Submariners in War and Love and Life (Hardcover)

19 Responses to “Larry Colton: Celebrating the Publication of “NO ORDINARY JOES””