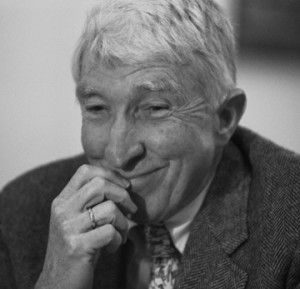 John Updike was the literary Sam Snead.  Golf  Dreams: Writings on Golf, published in 1996, was his 49th book, a miscellany of golf-related short stories, essays, excerpts from novels and the occasional poem.  As a writer, Updike was long and straight. He was also a natural who strode onto the first tee of the Writer’s Tour with a perfected style, his prose as supple and smooth as Snead’s fluid swing, and as enduring.

Golf was a recurrent motif in Updike’s work.  This handy distillation provided readers not only with a compendium of Updike’s golf prose, but with his own running commentary about the origins and publishing history of the collected pieces.

Able to support himself as a writer practically from infancy – a staff writer for The New Yorker right out of Harvard, he was free-lancing full time by his mid-20s – Updike lived the suburban life much of his fiction centered on. As he observed in his memoir, Self- Consciousness, he had “learned to play the rich child’s games of tennis and golf,” in his mid- 20s, after moving to Ipswich, Mass.

Smitten with the game, and possessing more free afternoons each week than the average working stiff has in a year, Updike not only played golf often, he immediately put his experience to good use by placing golf clubs in the hands of his characters.

Updike in autumn was awakening from his golf dreams, the hope nourished in every golf traveler’s soul that some ultimate improvement lies just over the horizon.  Golf magazines, with their endlessly repeated tips and discoveries, feed off of this longing.   ”The suspicion crept over me,” Updike wrote in the preface to Golf Dreams, “that golf had stolen my life away: the hard gemlike flame with which I, an artist, should have burned had been dampened if not doused by the green mists of this narcotic pastime.”

The glow of Updike’s flame was amply blight, those “green mists” notwithstanding. The earliest stories, mostly written for The New Yorker, carried not merely hints of the greatness to come but its full expression. “Intercession,” chronologically the first Updike golf story, contains this line: “Then, so gently he might have been hooding a falcon, he fitted the golden head of his club with a chamois cover.”  This is echt-Updike, this ability to capture an everyday moment with a simple image that displaces routine with poetry.

Updike’s best-known character, Rabbit Angstrom, was a steady denizen of the links once he escaped the gravitational pull of his youthful orbit.   In excerpts from the four Rabbit novels in Golf Dreams, we see Rabbit evolving from early manhood to middle age: the vigorous, if confused hoopster stalking the “pagan groves and green alleys” of youth will eventually sink into a Florida dusk of golf carts, conceded putts and angioplasty.

Who else but Updike could write that “all swing thoughts decay, like radium,” or describe the aural sensation of a ball leaving the clubface as a “pleasant tearing sound, as if pulling a zipper in space”?

Updike “read about golf, with great pleasure,” he wrote in Golf Dreams, “long before I played it.” Then, having played golf, he compounded the delight for devotees of golf literature by adding these marvelous chapters to golf’s bulging shelf.   I can’t imagine anyone devoted to golf’s literary treasures not finding delight in this unassuming, captivating book.

This Review is part of an ongoing series of commentaries and reviews on the best of golf literature.