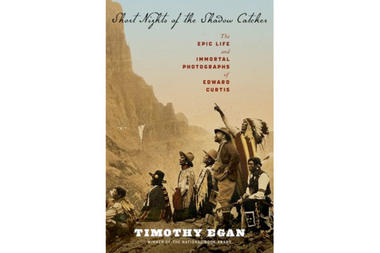 Exactly eighty-five years ago this week, Seattle’s “most famous citizen,” returning from a successful summer of field work in Alaska undertaken for the final volume of his monumental photographic and ethnographic survey of the “vanishing” native peoples of western North America, was arrested by King County deputies for his alleged failure to make alimony payments.  Timothy Egan’s heartbreaking account of the trial that followed illuminates both Edward Curtis’ extraordinary life and the limitations of Egan’s biographical method.

Drawing heavily on Curtis’ unpublished autobiography, as well as on archival research (including in the records of Portland’s legendary climbing club, the Mazamas), Egan’s account of Curtis’ thirty-year quest to memorialize native life at the turn of the 20th century in The North American Indian seems reliable, thorough and, as one would expect from a writer who’s won both a Pulitzer Prize and a National Book Award, well-written, if occasionally straining for the mot juste.   Writing that newly rich Seattle residents would “pay handsomely to have the name Curtis etched below their hagiographic mugs,” for example, is showy.   Egan also strains for effect when he writes that “coming from the maritime Northwest, where rain fell as soft and persistent mist, Curtis was not used to such muscular meteorological mood changes” as he encountered in the southwest.   On the other hand, writing that the Dakota plains “were a ghost prairie in 1907—an empty pantry,” or that “vandals and thieves were actively chiseling away the centuries of life left behind in the cliffs” of Anasazi dwellings, get it just right.

Still, until the final pages, when his account of Curtis’ humiliation and collapse brings him alive in ways the chronicle of his years of struggle and triumph never quite do, the tone of Short Nights of the Shadow Catcher is restrained, as if Egan is reluctant to evaluate as well as narrate.  Because his heart is on his sleeve in the alimony trail, Curtis comes alive, and that highlights what’s missing from most of the book—access to Curtis’ inner life, as opposed to a chronicle of his business dilemmas, or the tribulations of accomplishing his life’s work.   Simply chronicling a life is not the same as biography.  Roger Porter of Reed College asks “what else does a biographer do but uncover documentary evidence, determine its importance, and use it to interpret the subject under study?’  Egan performs the first two tasks successfully, but does little to “interpret” Curtis in the way that, to use one example, Edmund Morris does for his subject in his splendid biography of Teddy Roosevelt.

It is, nonetheless, a remarkable story that Egan tells.  Entirely self-made as an artist and self-taught as an anthropologist, Curtis discovered his métier when his photographic skills intersected with the public’s curiosity about the fate of the last “wild Indians.”  A vigorous and avid outdoorsman and already a successful studio photographer, Curtis rescued a climbing party on Mt. Rainier in 1898 which just happened to include George Grinnell, “the world’s foremost expert on Plains Indians,” and C. Hart Merriam, cofounder of the National Geographic Society and chief of the U. S. Biological Survey (predecessor to the US Fish and Wildlife Service). They liked this “resourceful fellow,” Egan writes.  “He was fast on his feet, quick with a joke, full of practical knowledge, physically heroic.”    So impressed was Merriam that he asked Curtis to join the Harriman Expedition to Alaska, “the last great exploratory expedition of its kind in North America, dating to the Lewis and Clark journey a hundred years earlier.”

John Muir was also a member of the Harriman Expedition. He’s the only person I can think of who reminds me of Curtis.  (Although Harriman and Curtis were both sons of preachers who dropped out of school, they had little else in common.)  Muir and Curtis shared extraordinary physical stamina, self-confidence, and in the final analysis, an enduring influence.  They also had domineering fathers and extraordinary repositories of self-reliance. Did Curtis talk with Muir during their two months together?  Muir was much older, but they’d both grown up in Wisconsin and could climb mountains as easily as a normal person could amble down a level trail.   Curtis must have seen something of himself in Muir.   Did they stay in touch?  Muir lived until 1914.

Through Merriam and Grinnell, Curtis would also meet Gifford Pinchot (a key character in an earlier Egan book, The Big Burn), Theodore Roosevelt (who liked him well enough to have him as a house guest and to photograph his daughter’s wedding), and America’s richest man, J. P. Morgan, who would finance The North American Indian in a deal that would have given Faust pause.  At his alimony trial in 1927, Curtis confessed that while Morgan  and his estate had invested $2.5 million in the project—“an amount equal to about $50 million today,” Egan notes—Curtis himself had worked for “nothing.” (He also struggled to pay his loyal and mostly uncomplaining staff.  But apart from his Crow interpreter, Alexander Upshaw, none of Curtis’ colleagues ever quite come to life here either.)  And while he made nothing, Curtis told the judge, composing the twenty volumes of The North American Indian was “the only thing I could do that was worth doing.”

No one doubts now the value of what Curtis accomplished, and not just in monetary terms, although Egan notes that a “single photogravure of Chief Joseph…sold for $160,000 in 2010,” and a complete set sold in 2005 “for $1.4 million.”  (Only 222 sets were completed.)  Curtis’ real contribution was to recognize the inherent value and the religious significance of tribal cultures, and to work with a maniacal intensity to film and record them, fearing that if he did not, they would be lost entirely.  He intended, he said at the outset, to “a complete publication…of all tribes yet in a primitive condition.”   The peoples and cultures he was recording, of course, had already been transformed by centuries of contact, directly or indirectly, with the post-Columbian world.  Horses, introduced by the Spaniards, transformed life on the Plains.  Sheep were indispensible to Navajo life.  Kit Carson had tried to obliterate the Navajo by destroying their flocks.  Curtis had an intuitive appreciation of this history.

He learned native languages, compiled dictionaries, and made wax recordings of songs, which he then transcribed.  Those recordings can still be heard, and the originals collected between 1907-1913 are at Indiana University.   Curtis was never patronizing to his subjects, even when he staged their poses, and he always acknowledged the contributions of his native collaborators.  Trusting his informants, Egan writes, Curtis challenged the prevailing narrative of Custer’s last stand, adding eye-witness reports of Crow scouts that disputed the myth of Custer’s heroism.  (And these were the scouts on Custer’s side.)   Curtis despised the policies of the Bureau of Indian Affairs and the meddling hostility of Christian missionaries to “pagan practices.”  He admired the religious practices of native peoples.  His point of view seems very modern.

After the Morgan interests acquired all of his copyrights, both Curtis and his work disappeared from public view.  Despite his ex-wife’s hostility, Curtis retained the love and affection of his four children.  Marianne Wiggins’ novel, The Shadow Catcher, includes a photo she took of Curtis’ headstone in a Los Angeles cemetary.   “Beloved Father,” it reads, and Wiggins notes that his children chose to be buried on either side of him.  She makes that discovery the central insight of her fictional enquiry in Curtis’s life and loves.

Nearly twenty years after his death, a new generation, attracted by myths of native righteousness and wisdom, rediscovered Curtis.   Academics alone study Curtis’ written accounts now, but the pictures are universally admired.  “Curtis mastered the art of making his subject so dimensional, so present, so complete,” writes Louis Erdrich, “that it is to me as though I am looking at the women through a window, as though they are really there in the print and in the paper, looking back at me. This is the genius and the gift of the work. The women photographed by Curtis are so alive that it seems any minute they will change their expression: the hint of a smile will turn into a hoot or laugh, the frown into exasperation.”

You can see Curtis’ photos on-line at the Library of Congress website.  http://memory.loc.gov/ammem/award98/ienhtml/curthome.html

Although Egan includes some plates, looking at the images while reading the book will add to the pleasure.   Taschen also published a paperback edition of the photos that you can get online for $5.00, and I would recommend that as a supplement to the Egan biography.

A slightly different version of this review appeared in The Oregonian.