This review first appeared in The Oregonian 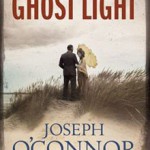 Loosely based on the lives of the Irish actress Maire O’Neill (né Molly Allgood) and her lover, the playwright John Millington Synge, Joseph O’Connor’s Ghost Light convincingly inhabits the vanished world of Edwardian Dublin in general and the Abbey Theatre crowd in particular. The novel opens in mid-20th century London, where O’Neill in her dotage, alcoholic and impoverished, struggles to retain her dignity, awash in remembrance and desolation.

The narrative flows down a stream of consciousness, as the ancient Molly’s reveries drift back toward her girlhood in working class Dublin. An introduction to the theatre by her sister, a famous beauty and an actress herself, provokes her misalliance with Synge, Protestant and already ailing with the Hodgin’s disease that would soon kill him. These yoked frailties condemn their ardor to secretive trysts and a deep, abiding disappointment for Maire.

O’Connor’s marvelous handling of point of view is the technical accomplishment pushing the narrative forward, but it’s the consciousness he evokes, the yearning and disappointments gripping O’Neill, her poignant and forlorn struggle to affirm her dignity and retain her memories, that give the novel its power. The voice is mostly in the present tense and second person, a tricky strategy, but one that O’Connor pulls off brilliantly. The”you” is O’Neill, but the effect is to put the reader directly into her view of the world, with access to her rationalizations and her pitiful pretensions.

The “you” is the voice of memory–we say, in talking to the friends or family with whom we share our lives, “do you remember when such and such happened?”It’s that “you” which O’Connor employs so skillfully in Ghost Light.

“You dreamed of Wicklow: hidden lakes, the ruins of old mines, bog meadows,Ravens’ Glen, the waterfall of Powerscourt. You had been a reason to visit again the places of his [i.e. Synge’s] childhood summers–that was all you had been: a diversion. A reason to speak the place names he found soothing to say, the words sounding beautiful in his Kingstown accent: Djouce Mountain, Tonduff, Carrickgollogen, Knocksink, Aughavanna, Glenmalure,Annamoe, Lough Nahanagan. The graves of the Protestant churchyard at Enniskerry, not far from Lover’s Leap rock. You had asked him to show you his favorite view of all; he’s brought you hiking up a switchback path above the forest at Kilmolin.” [PAGE 122]

“The words sounding beautiful” is the key passage here. In the introduction to the play that made him world famous (and provoked riots on opening night in 1907), “The Playboy of the Western World,” Synge wrote, “In a good play every speech should be as fully flavoured as a nut or apple, and such speeches cannot be written by anyone who works among people who have shut their lips on poetry. In Ireland, for a few years more, we have a popular imagination that is fiery and magnificent, and tender; so that those of US who wish to write start with a chance that is not given to writers in places where the springtime of the local life has been forgotten, and the harvest is a memory only, and the straw has been turned into bricks.”

O’Connor has taken Synge’s advice, sprinkling Maire’s memories with Dublinisms, nuts and apples mined, he tells us in an afterword, from The Dictionary of Hiberno-English. Thus we encounter “mizzle” (a misty rain)and “judder” (vibrate intensely), “pizzle” (a bull’s apparatus) and”gurrier” ( a lout). Without the cement of Maire’s memories, the words would simply be arcane; secure in the narrative, they carry the reader deeper into her world.

O’Connor’s range as a novelist is impressive, his narrative gifts and the exuberant (but never overwrought) texture of his prose a remarkable achievement. Ghost Light is the forth O’Connor novel I have read (Star of the Sea, Inishowen, and Redemption Falls are the others, and there are three more yet to savor), and each is distinctive and knowing, with a particular voice and a narrative drive suited to each of their very different subjects.Ghost Light, this gentle, generous and sympathetic, but yet not sentimental plunge into the doleful soul of Maire O’Neill, its title derived from “an ancient superstition among people of that stage” holding that a “lamp must always be left burning when the theatre is dark, so the ghosts can perform their own plays,” choreographs the performance of a radiant cast of spirits.