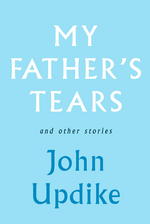 John Updike published the first of his celebrated short stories in The New Yorker in 1955. When he died earlier this year at the age of 76, another installment of the long and honored succession of books he wrote at a prodigious rate over more than five decades was at the publisher’s.

“My Father’s Tears” has the virtues of all Updike’s fiction, though one reads it with a certain sadness knowing that this diligent voice, with all of its dazzling and epigrammatic sheen — the expressions of a master who pursued his craft with a dairyman’s assiduity — has now fallen silent.

The stories in “My Father’s Tears” focus on the experiences of people who are looking at the world from the vantage point of someone more or less Updike’s age, in keeping with the fictional project he set for himself in his late 20s, when he began work on “Rabbit, Run.” Rabbit Angstrom is a prototypical Updikian character, with his Pennsylvania roots and his quotidian struggles. Looking back many years later on the gestation of the four Rabbit novels, Updike wrote that the “United States, democratic and various though it is, is not an easy country for a fiction writer to enter: the slot between the fantastic and the drab seems too narrow.” Writing fiction, Updike continued, “kept alive my native sense of wonder and hazard.”

Several of the characters in these stories struggle with a loss of faith, echoing a theme explored in much of Updike’s fiction. The most powerful instance of apostasy is rendered in what is also the most audacious of the stories in “My Father’s Tears,” “Varieties of Religious Experience,” borrowing the title, of course, from William James. The first line of the story reads: “There is No God: the revelation came to Dan Kellogg in the instant that he saw the World Trade Center South Tower fall.”

Kellogg’s despair brackets the introduction of three other set pieces in this story, as Updike segues first to Florida, where we see two young Muslim men in a bar “blending in,” preparing, we know but the patrons in the bar cannot, for their deadly mission. The scene shifts once again to New York, only this time to the South Tower itself, already hit and burning, where a young businessman is talking to his wife on the cell phone but must break off the call to head toward a window, away from the smoke and heat. The scene then shifts once again, this time to one of the hijacked planes and the slowly dawning awareness in an elderly female passenger of what is happening.

But as with other Updike stories, however much we may admire the writing, the vividness of the telling and the acuity of the observations, we may not be much moved. Because we all have such access to news about an event like 9/11, writing about it fictionally in a way that stirs new emotions is difficult. Nonfiction defeats fiction here, at least until we find our Tolstoy. Still, only a writer in complete command of his craft could even attempt a story as demanding as this one.

Updike was a public intellectual, whose essays and reviews are unmatched for breadth and learning among the literary titans of his generation. He wrote hundreds of book reviews, and none I read was ever less than informed, nuanced and sympathetic. Norman Mailer, almost his contemporary but somehow both older and younger than Updike, was bombastic and self-promoting, in contrast to Updike’s modest but polished demeanor. And yet my suspicion is that while Mailer is best-known now for his nonfiction — the undeniably great “The Executioner’s Song,” for example, or “The Armies of the Night” — in the long run Mailer’s fiction will occupy a higher place in the literary canon than Updike’s, while Updike’s criticism will, like George Orwell’s, provide a nearly bottomless source of insight for as long as people read.

These stories, like the Rabbit novels, are a window into the world Updike chose to inhabit and explore. They are a pleasure to read, even when the subject matter is death or the anticipation of annihilation, because they are so honestly observed and scrupulously executed. If there is a literary pantheon, a heaven for writers, Updike deserves a room of his own.