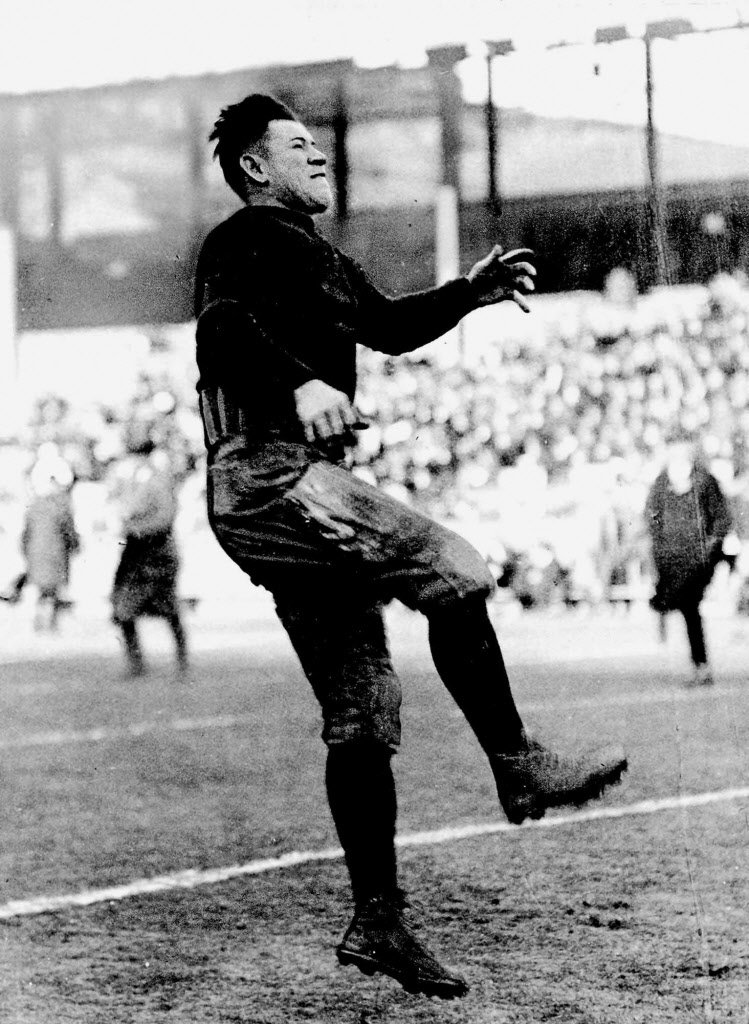 Jim Thorpe was a restless man who drank too much, abused his wives and abandoned his children. Yet he was revered throughout most of his life as the greatest athlete of his era — a football All-American and the winner of two Olympic gold medals. One of the founders of the National Football League, Thorpe was also the NFL’s first star. He played major league baseball, too. The breadth of his athletic achievements astonishes us today.

That he was also a descendant of Chief Black Hawk, born just as the U.S.’ war of conquest over native peoples was concluding, made Thorpe a symbol, too, for fundamental cultural shifts. The fact that he was stripped of his gold medals for having played professional baseball before the Olympics, in contravention of the then-prevailing rules of “amateurism,” adds poignancy to Thorpe’s story. Thorpe’s career as a “Hollywood Indian” adds yet another layer of perverse complexity to an already opaque tale.

Kate Buford’s comprehensive biography, “Native American Son: The Life and Sporting Legend of Jim Thorpe,” investigates Thorpe’s life with dogged efficiency. Buford has mined every known source of information about Thorpe’s life. But her account is hampered by the hard truth that, aside from his marvelous athletic accomplishments, Thorpe was not a very interesting person. Given that Thorpe was laconic, guarded and prone to dubious recollections, it’s impossible for her to discover anything about the “real” Jim Thorpe. In lieu of this, she examines the times in which he lived and reports at excruciating length on what seems like every at-bat and every plunge through the line of scrimmage in Thorpe’s long career.

Born into the Sac & Fox tribe, a people displaced to Indian Territory by the United States’ Indian removal policy, Thorpe first achieved fame as a football player at the Carlisle Indian Industrial School in Pennsylvania, one of a collection of culture-killing boarding schools that included Chemawa Indian School in Salem. Thorpe’s son Jack, who is now leading a fight to return his father’s body to Oklahoma from its current burial place in Jim Thorpe, Pa., attended Chemawa.

Despite her diligence, Buford gets things wrong. She writes, for example, that “oil was found on the Navajo reservation at Teapot Dome in Wyoming,” conflating two separate though related incidents. The corrupt secretary of the Interior in the Harding administration, Albert Fall, accepted a bribe to lease federally owned oil fields at Teapot Dome in Wyoming to a private company without competitive bids. Fall separately encouraged illegal oil exploration on Navajo land in New Mexico and Arizona.

Buford doesn’t seem to understand the difference between “race” and culture, either. On the one hand, she researches Thorpe’s “white” ancestry, tracing it back to Britain. But culturally, this pedigree meant nothing — Thorpe never thought of himself as “English,” and was raised as a Sac & Fox Indian. On the other hand, Buford treats the ancestry of a Lumbee Indian friend of Thorpe’s as somehow bogus because he was “black,” apparently not realizing that African and Native American DNA were blended among many native peoples, especially during the long period when the frontier tribes provided a refuge for runaway slaves.

If Thorpe, with half of his DNA from European ancestors, regarded himself as an Native American, why would it be different for a person whose ancestry was part Native American and part African, as was the case of the wrestler “Chief Buffalo Child Long Lance,” a classmate of Thorpe’s at Carlisle also known as Sylvester Long?

A recent book about another famous Native American who lived in Oklahoma during Thorpe’s boyhood illuminates the absurdity of Western notions of racial identity. S.C. Gwynne’s “Empire of the Summer Moon” tells the story of the last great Comanche war chief, Quanah Parker, who had a Western surname because his white mother was kidnapped as a child in a Comanche raid in Texas and became, in all respects, a Comanche woman. “Rescued” as an adult, she pined for her people and lamented the husband she lost in the raid to “save” her, trying over and over to return to the people she loved. Was she more or less an “Indian” than Thorpe, or Sylvester Long?

About halfway through “Native American Son,” I read an excerpt from Jane Leavy’s biography of Mickey Mantle, “The Last Boy.” Leavy’s lively and provocative prose underscored what’s missing in Buford’s painstaking narrative. Leavy could talk to Mantle’s contemporaries, of course, while Buford was largely dependent upon the historical record. Buford guides her readers through the known details of Thorpe’s life, and dilates on his cultural importance, but at the end of the day the great Jim Thorpe remains an enigmatic figure.