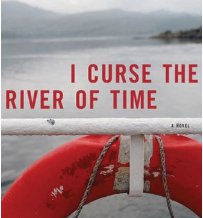 Per Petterson achieved international renown with his previous novel, “Out Stealing Horses.” Its prose had a kind of stillness and authenticity that appealed to readers, with a voice both unassuming and authoritative. It secured Petterson’s reputation as a major writer, embraced by the literary establishment, such as it is, and assured a respectful reception for any subsequent work.

“I Curse the River of Time” has the same calm narrative thrust of “Out Stealing Horses,” but the narrator, Arvid Jansen, is such an irritating, self-indulgent fool that it’s hard to find the story in all the misdirected cogitation. In this passage, for example, Arvid is describing a scene at his mother’s birthday party, where he had intended to read a speech he had written. It illustrates the dilemma Petterson has created for his readers:

“So when I stood up, a roaring wind blew through my head, there was spring tide and breaking surf in my brain, I took one step to the side and bumped into a chair where a farmer in a suit was sitting, he smelled of cowshed and milk, an uncle, I am certain he was, I had seen him before, and I had nothing against that smell, it reminded me of childhood, not my childhood, but someone’s childhood, and not only was I drunk, I had forgotten the two sheets of paper with the speech in my jacket, and my jacket hung in the hall with the other jackets.”

Is this intended to convey the wages of alcoholism? Is it supposed to be funny? If so, it must depend on a singular Norwegian humor that at best hopes for a titter or a chuckle, not a laugh. Or perhaps it is supposed to remind us that humor is close to tragedy, that we laugh at ineptness as long as it’s not dissolving into calamity.

But there is hardly a moment in the novel that manages to summon any sympathy from the reader for Arvid. He seems determined to show himself, again and again, in the worst possible light. Perhaps an early scene where he is driving and singing with his young daughters on a winter outing cloaks him with a convivial charm, but the kids disappear from the story after this brief early appearance. Despite parents, brothers, a wife and children, and co-workers (not friends), Arvid is as alone as any character ever imagined by Jean-Paul Sartre or Samuel Beckett. Even his mom, whose diagnosis with terminal cancer launches the novel, has richer prospects than Arvid.

A lot of contemporary fiction rests on misdirection or deceit, the art of putting the reader in the hands of an unreliable narrator. But Petterson’s storyline has deeper roots, and “I Curse the River of Time” falls somewhere between a tall tale and the audacious ingenuity of the early Charles Dickens. In “Hard Times,” Dickens’ Mrs. Gradgrind lies ill. Her daughter asks, “Are you in pain, dear mother?”

“‘I think there is a pain somewhere in the room,’ said Mrs. Gradgrind, ‘but I couldn’t positively say that I have got it.'”

Arvid, with his putative recollection of “someone’s childhood,” is the reincarnation of Mrs. Gradgrind,only now instead of an earnest Victorian woman the wandering soul has taken on the form of an insecure Norwegian Maoist entirely lacking self-awareness. The novel is set in 1989. The Berlin Wall is falling, Arvid’s mom has just learned that she is dying while his wife, about whom we learn absolutely nothing, has filed for divorce. Arvid is willfully alone, perversely isolated and determined to avoid learning anything about himself. He follows his Danish mom to her hometown in northern Jutland — the part of Denmark that is attached to the continent — all the while contemplating what’s driven her to go there from Oslo without bothering much to wonder why he’s followed her.

The tone of “I Curse the River of Time” replicates the appealing timbre of “Out Stealing Horses,” but the novel not only avoids the river of time, it also buries Arvid up to his knees in the mudflats of futility. There’s a subplot of an early affair Arvid had with a young woman, a kind of counterpoint to mom’s endgame, but as with Arvid’s other tales, it’s inconclusive to the point of vapidity.

Nonetheless, I still believe Petterson is a writer of great power. Arvid Jansen may be molded from some deep substrate of Petterson’s psyche, and in purging him onto the pages of “I Curse the River of Time,” Petterson may have liberated himself from the hold of this strange intemperate man, freeing him to undertake the next great novel surely able to flow from his pen.Â

I CURSE THE RIVER OF TIME
Per PettersonÂ
Graywolf Press
$23, 224 pages