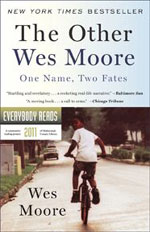 This review first appeared in The Oregonian on May 29, 2010.  I was very surprised when I read the Sunday Oregonian today, January 16, to read a Q & A with Wes Moore conducted by The Oregonian’s book editor, Jeff Baker, and to learn that “The Other Wes Moore,” just out in paperback, “is the 2011 selection of Everybody Reads, a community-wide reading program sponsored by the Multnomah County Library. Discussion groups will be held throughout February, and Moore will be in Portland on March 7 for an event at the Arlene Schnitzer Concert Hall.”  In the last sentence of my review, I suggested that Moore’s meditation “….may succeed in converting the interest generated by this well-promoted book into a genuine debate about opportunity and aspiration, and the enduring cost of racism.”  It appears that this is exactly what has happened.

Here is my original review: 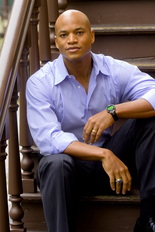 The author of “The Other Wes Moore: One Name, Two Fates” is a New Yorker with an impressive résumé: Rhodes Scholar, Army officer in Afghanistan, White House Fellow. He works now as an investment banker, the only blemish on his impeccable résumé. His book is both a memoir and the biography of another young man named Wes Moore, now serving a life sentence in a Maryland prison.

At about the same time he was named a Rhodes Scholar, author Moore learns that a man sharing his name has been arrested for murder, and articles about both men appear in their hometown paper, the Baltimore Sun. On his return from Oxford, Moore finds himself unexpectedly obsessed with this other Wes Moore. Writing that “there were nights when I would wake up in the small hours and find myself thinking of the other Wes Moore, conjuring his image as best I could, a man my age lying on a cot in a prison cell, burdened by regret, trying to sleep through another night surrounded by the walls he’d escape only at death. Sometimes, in my imaginings, his face was mine.”

Moore recognizes that this is a thin cord of attachment. His family was able to summon the resources to provide him educational opportunities unavailable to the other Wes Moore. Access to good schools surely made a difference. Nonetheless, he’s proud of his choices and his accomplishments, and his accounts of petty delinquencies during his adolescence are intended to suggest the road not taken. The other Wes Moore is also smart and resilient, but his single mom could not insulate him from the lure of the drug trade and the bogus glamour of thug life, and he was a thriving gangster by his early teens. Once the author Moore is at Valley Forge Military Academy and the other Moore is a dropout, a teenage father and a full-time drug dealer, the die has been cast. These parallel narratives have, however, almost no dramatic tension — we know the outcome before the story begins.

“The Other Wes Moore” lacks the passion animating the great autobiographies of Black America, from Richard Wright’s “Black Boy” to Claude Brown’s “Manchild in the Promised Land” to “The Autobiography of Malcolm X.” Moore also tells us, apropos the other Wes Moore’s success as a dealer, that there are 100,000 drug addicts in Baltimore, a city of 700,000. He does not wonder, however, what makes this possible — what levels of official corruption must exist to supply a craving so vast?  (He also neglects to cite a source for this number, which seems astonishly high–one in seven Baltimoreans are drug addicts, when the highest estimate of illicit drug use in the USA that I could find pegs addiction rates at about 8%, or one person in 12, not Baltimore’s one in 7?)

Moore also does not wonder either at the fact that in 1999, 58 percent of state prisoners convicted on drug charges were African American, despite compelling statistical evidence that the rates of use and sales of drugs are proportionately identical among America’s white and black populations. African American men are incarcerated at a rate almost seven times that of whites, with enduring implications: Felons can’t find work, fall back on criminal skills refined in prison and abandon hope. Can there be a better prescription for the creation of an alienated criminal class?

Wes Moore, whose determination and ambition shine through the pages of “The Other Wes Moore,” may succeed in converting the interest generated by this well-promoted book into a genuine debate about opportunity and aspiration, and the enduring cost of racism.�

2 Responses to ““The Other Wes Moore: One Name, Two Fates”–A Review”