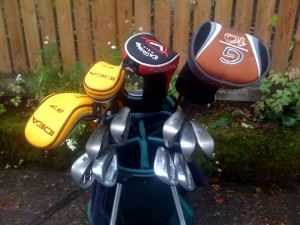 My brother-in-law, Lee, the Happiest Man in America, is self-described as “mildly OCD.”   Although he’s not as obsessed about it now as he used to be, he’s never liked to accept conceded putts.  He likes to follow the rules, and in golf that means holing out.  Except in a match, of course, where putts can be conceded.  But Lee’s take is that if you intend to post the score, which he always likes to do, you should hole out to make sure your handicap is legit.

So I used to knock short putts away in a gesture of concession, especially if he was leading in our match.  We always play a three dollar Nassau, and I would enjoy watching Lee retrieve his ball, putting it back down on the green more or less where it had ended up and then making the putt.  But over the last few years he’s gotten into the spirit of conceding putts, although once in a while he still will pick up the ball and backtrack to putt out.

The other day we were finishing a round at a local muni in Portland (where Lee shot 79, his first round ever under 80—he was doing an awesome Fred Funk impression off the tee and his worst drive barely missed the fairway), when Lee raised an interesting philosophical question.  “What do you think should happen,” he asked, “if an OCD guy who likes his clubs organized in a particular way gets a caddie who has his own style with the bag?”

“Would I know this guy?”

“It came up in Oakmont.  My caddie had his own way.  And while we’re discussing this, I want you to know I let him put things the way he wanted.”

“And besides, you’re not pulling the clubs.  He’s handing them to you.”

“But I was afraid I might look in there and see they’re not where they’re supposed to be.”

“So don’t look.  You want your caddie not just hauling the clubs around, but doing what  a good caddie does, like our buddies Dave and Danny at Bandon.  The club schlepping is the easy part: it’s the psychological support you really need.”

“Yeah,” Lee said, “you’re right.  Like, you’ve just shanked your approach shot on the forth at Bandon Trails.  It’s the first round of five you’re playing over the next two days.  You break out in a cold sweat.  That’s when you want Dave to pat you on the back and say, ‘Lee, don’t worry, that happens to everybody.  We know what you’ve got.’ And then you stiff your third from 60 yards and off you go.”

“Correct.  The caddies at most clubs who loop for guests, at places like Cypress Point or San Francisco Golf Club, take ownership of your bag before they’re finished shaking your hand.  If you have one of those faux-tour behemoths, they grab a little carry bag, toss your clubs in there, make a calculated guess from watching your practice swing at how many balls you’re going to lose, and load the little bag with ammunition accordingly.  And off you go.  As Steve Williams supposedly told Tiger during their audition, ‘I’m a caddie, not a mule.’”

So Lee and I believe that when the caddie is on your bag he owns it.  You can put it back the way you like when he surrenders control.  And if his approach to organization makes you uncomfortable, avert your eyes.   It’s always good advice to worry only about what you control.  That’s the zen of golf: acceptance, toleration, surrender.