The China Golf Show in Guangzhou concluded on October 16th after a three day run.  A competing industry event, the Asia Pacific Golf Summit in Bangkok, reduced the number of exhibitors in Guangzhou.  Compared to last spring’s Beijing Golf Show, the Guangzhou event was small and less vibrant, but it nonetheless showcased the qualities that have made China’s golf economy the most dynamic in the world.

First, a lot of young people attended, drawn by golf’s glamorous status in China.  “Golf” and “glamour” are words not normally yoked in the west, but golf is a “luxury brand” in China, and that gives it cachet.   When westerners speak of golf as an elitist game, they’re not praising it.  But in China, the lust for luxury brands, which drives the huge knock-off market in purses and watches and other consumer goods, also motivates young people to work hard and achieve—old-fashioned virtues whose animating power has diminished in the west.

Young people in China dream of playing golf because they believe doing so certifies success.   The trajectory is plain: work and study hard, get a good job, buy a house, buy a car, join a golf club.  Given that there are still only 400 or so golf courses in China (and any reliable census is elusive because courses built without official government approval  intentionally fly under the radar), while there are tens of millions of young people focused on getting ahead, the demand curve for golf will continue to point almost straight up.

There are little signs here and there that the government’s official skepticism of golf development (undermined a bit by the reality that every successful business tycoon and most top government officials play golf) will soon be lifted, a consequence primarily of the legitimacy bestowed on golf as an athletic endeavor by its status as an Olympic sport.  Most people close to the Chinese golf scene believe the day is at hand when golf development will receive the general blessing of the central government, launching a boom that will echo the US golden age of the 1920s, when golf ceased being a novelty and courses were built in thousands of communities across the USA.

No city proclaims China’s rapid ascent as a global economic power over the last three decades louder than Guangzhou’s neighbor, Shenzhen, which is also the epicenter of China’s golf boom.  There are more courses in the Shenzhen-Guangzhou area of Guangdong province than in any other region of China.  The famous Mission Hills complex is here, and many golf course management companies, course builders, and design firms (often under the umbrella of a single company) have headquarters in Shenzhen.

What’s astonishing about Shenzhen, the closest mainland town to the then British colony of Hong Kong when Deng Xiaoping designated it a “Special Economic Zone” in 1979, is its growth over the last three decades: 30,000 then, and perhaps as many as 18 million now—no one knows for sure.  The city knocks down mountains as it swells across the landscape.  Even natives get lost because Shenzhen constantly refreshes itself.  A magnet for the most ambitious and talented people, modern Shenzhen’s pioneers bequeathed to their descendents a tradition of exhilarating growth.

It’s less than an hour’s flight from Shenzhen down to Hainan Island, where a boom in officially sanctioned golf course projects is underway.  Tom Weiskopf is doing a course there, as are Coore-Crenshaw, and the ubiquitous Schmidt-Curley, architects of the second Mission Hills, this one in Haikou.  The Hainan version hits the world stage with next week’s Star Trophy, announced last spring as “a ground-breaking Celebrity Pro-Am tournament featuring several of the biggest names in entertainment and sports and the richest individual prize in Asian golf.”

Greg Norman, Annika Sorenstam, and the Ryder Cup captains Colin Montgomery and Corey Pavin are among the twenty professionals competing for a $1.28 “winner-takes-all” prize, along with their pro-am partners and a cluster of Hollywood celebrities.  The Mission Hills’ team has always been great at promoting its projects, and the Star Trophy confirms the Mission Hills Group’s stature as the most innovative and visionary golf development company in Asia. 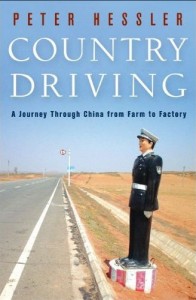 My favorite guide to modern China is Peter Hessler, who originally came to Sichuan province as a Peace Corps teacher in a village about to disappear under the waters impounded by the Three Gorges Dam.  His memoir of that experience, River Days, earned him a spot as the China correspondent for The New Yorker.  His second book, Oracle Bones, was an anthology of essays, all illuminating and insightful.  I envied his fluency in Chinese, and thought of him as a kind of surrogate for the kinds of questions I would like to be able to ask and the conversations I wish I could have with ordinary Chinese.

Hessler’s most recent book, Country Driving, has a slightly harder edge than his earlier work but the same curiosity and deep empathy are at work.   The book is both grounded in his experience renting a country house in a village north of Beijing, and enlarged by the trips he takes in rental cars around China, particularly a journey along the Great Wall.  He travels far enough west to watch the wall disappear in heaps of sand blown in from the Gobi desert.

Hessler also examines the protocols of smoking, which often involve flaunting a “superior” brand.  In today’s China Daily, the official English-language newspaper, there was a front-page story with the cryptic headline, “Puffing up image as leading lights.”  The story was about the booming Chinese cigar market.  “It’s all part of the new luxury lifestyle,” the paper says, quoting the manager of a five star hotel.  “Nice cars, nice wines and, of course, nice cigars have become a big thing.”

Even the China Daily tries for journalistic balance, appraising the high cost of smoking in China at the same time it’s publishing an article glamorizing smoking cigars.  “China is the world’s biggest consumer of tobacco, with 350 million smokers,” the story reports.  “There are roughly 1 million smoking-related deaths occurring in China every year.  Despite attempts by the Chinese government to build a smoke-free society, as the tobacco companies are all State owned, some provincial authorities rely heavily on the industry as a major source of revenue.  Campaigners argue that this has made smoking more difficult to control.”

Golf is not the only activity whose very existence in modern China is rich with irony.   It starts at the top, of course, with a government that is both communist and the world’s strongest exponent of capitalism.   Golf has a great future in China, for exactly the same reasons its critics find it suspect in the west: it’s elitist and luxurious and the hobby of the rich.