A surprisingly optimistic mood prevailed at the Mexican Resort Development conference held on September 12-14 in downtown San Diego’s Hard Rock Hotel.  The event was highlighted by golfing great Lorena Ochoa’s appearance as keynote speaker on the final day, underscoring the significance of golf as a driver of high-end Mexican tourism.   That the conference was convened at all was good news of a sort, because in 2009 such a gloomy outlook prevailed among Mexican developers, investors and consultants that the conference’s co-organizers, Contact Development Company and the international law firm, Baker& McKenzie, decided to postpone it for at least a year.   Since the conference was first convened in 2005, according to CDC’s president, Brett Ellsworth, and his colleague and co-host, Jose M. Larroque, a partner specialising in real estate transations and their tax consquences at Baker & McKenzie,  its goal has been not only to educate its audience about opportunities and challenges in Mexico, but also to provide a forum for fostering new business relationships.   Trust and collaboration across national borders is especially important now that tourism is a global phenomenon with new destinations competing for tourist dollars cropping up every year.

The irony in the current economic situation in Mexican real estate is that the problems it faces were not homemade, but rather descended on Mexico from north of the border, where leveraged banks taking extraordinary risks brought the world’s economy to its knees. 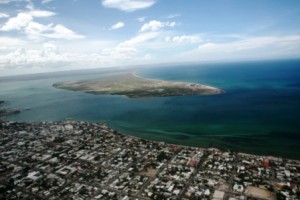 Mexico’s real estate sector was not overly leveraged, for a variety of reasons, including mortgage rules and expensive money.  Mexican banking did not collapse in the wake of America’s credit crisis, although for sure it was affected by it.  All of the experts at the conference agreed that Mexico’s banks are solid, and investors and developers both have tended to take a more conservative—that is, less leveraged—view.  What was most striking was the number of builders and developers reporting strong and steady sales, primarily to Mexican buyers, although at average prices considerably below what consumers were spending at the peak of the US property bubble.

American buyers were using the equity in their primary residences as the source of funds to buy houses in Mexico before the bust.  That’s not happening anymore, and prices have declined as a result.  Smaller units selling for less is now the norm.  Lots of Americans are still moving to Mexico, especially retirees.  But where in the past it was the attraction of great weather, lower cost of living, great beaches and natural attractions, and a culture rich in history, arts and cuisine, the new movement of gringos south of the border may result from a push rather than a pull.  Several speakers pointed out that baby boomers who were thumped by the recession may simply not be able to afford to live in the US during their retirement.  Mexico is an attractive, affordable alternative, especially if Medicare approves payment for medical services in Mexico.  President Calderon has proposed this, and it makes a lot of sense, which probably means that no American politician will take it seriously—it’s much too rational.  But it would take a burden off the US health-care system, which like the banking sector is already administratively top-heavy from so many hands in the pie, and put patients into a system which has salaried doctors and a single-payer system.

The question of whether or not tourism has been affected by the narco-wars was also much-discussed.  Everyone agreed that the perception of endemic violence in Mexico has absolutely hurt tourism.  But a further question was raised about whether or not the violence itself had a direct impact on tourists—specifically, have tourists been caught up in gun battles?  Here the answer was equally unequivocal: absolutely not.  Bruce Greenberg, a prominent appraiser based in Tuscon who has worked in Mexican real estate for decades, reported that 98% of all the casualties of the violence has involved people with direct links either to the drug trade, or among the police and army fighting the narcotraficantes.  That still leaves 2% as “innocent victims,” or more than 500 people, an unacceptable number by any reckoning.  But as several speakers were eager to point out, tourists are no more at risk in Puerto Vallarta or Los Cabos than they would be in Washington DC or New York City, despite the fact that Mexico’s overall homicide rate is higher than the US’s.

A number of experts in the new arena of social media addressed the conference, introducing entirely new ways of promoting projects.   It was well understood by all the delegates that the internet had revolutionized the purchase of real estate, and the old hard-sell models were extinct and would never return.  Buyers today are cautious, incredible well-informed, and impervious to sales pitches.   Developers can foster the creation of virtual communities to address doubts among by buyers by connecting to already satisfied customers.   Buyers are looking for evidence that authentic experiences will be available with their purchase.   Developers who understand social media have a means of providing virtual word of mouth, the most powerful endorsement for almost any consumer.   Michael Coyle, for example, insisted that any successful development in the future will have to “sell the truth.”   To convey what that truth is, he said, developers and their sales personnel must have a genuine “spine-tingling” story.  Sellers are no longer in control of buyers who have free access to infinite amounts of information.  To cut through clutter, sellers must be able to convince buyers that they are serious about, for example, their commitment to sustainability and other socially responsible measures.

Jason McCoy of Greg Norman Design and I were on a panel discussing resort amenities.  Golf development, too, has slowed in the wake of the recession, but here, too, there were expressions of optimism.  Both McCoy and I believe the downturn may provide an opportunity to get away from grandiose schemes building expensively landscaped golf courses on a large footprint, and in their place substitute six hole or twelve hole courses, or even an eccentric number if they fit the site.  This approach harkens back to the roots of golf in Scotland, when towns built golf courses based on the land available and the number of holes was random.  Most people on family holiday can’t take the time to play 18 holes, so providing family fun on the golf course over a two hour span on a nine hole course makes sense to Jason and me and many others in our profession.  For ideas such as this to catch on, however, we need to rethink what golf is as a game.  Not the basic rules or the skills required to play well, but how the game is perceived—what its purpose is.  There is no reason at all a person couldn’t develop a perfectly fine set of playing skills on a six hole course, especially if there is a good practice facility connected to it. And there’s no question that a shorter course but with fully designed and challenging holes could be a great amenity at a resort, and save on land costs and maintenance costs to boot. 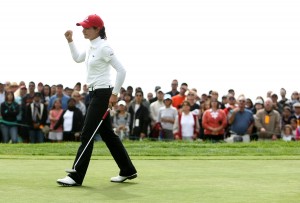 Keynote speaker Lorena Ochoa was gracious and charming and as much a star sitting demurely on stage answering questions as she been on the golf course over the last decade.  Recently retired and married (her husband is Andres Conesa, the CEO of AeroMexico), Lorena has not abandoned golf entirely, but she has forsaken competitive, championship golf, for the simple reason that she has met her goals as a player, and is ready to embark on the next stage of life: motherhood, golf course design, and nurturing the Lorena Ochoa Foundation, which has built a school in Guadalajara that totally supports all of the costs of education for kids from first grade through high school.

Recently, she said, she played in a fundraiser at the Turning Stone Resort in New York, and she was paired with Ricky Fowler.  “He’s fantastic,” she said, in the confident tones of someone who knows whereof she speaks.  “He has every shot, he’s brave and has a strong heart.  And he’s a very nice person.”

So at least in the eyes of Lorena Ochoa, team captain Corey Pavin made a very smart choice in selecting Fowler to his US Ryder Cup team.  A singles match between Rory McElroy and Fowler would stimulate the fervor of a heavyweight championship fight.   I hope we see that match on the final Sunday pairings.

Lorena said that she is interested pursuing golf course design, having learned a great deal from the all of the great courses she has competed on about the kinds of holes she likes and the sort of course she would like to create.  She has not yet selected a project, but as the good will ambassador for Mexican golf, would love to do her first project in her homeland.  Perhaps, she said, she will collaborate with her brother, Alejandro, who has partnered with Hills/Forrest to create Ochoa-Hills Golf Design.

Women tend to enjoy golf more than men, Lorena said, because they see it as a social event as much as a competition.  “When I talk to my women friends about learning golf,” she said, “I tell them to take lessons in a group, and not by themselves.  They get self-conscious alone, but with a  group they can enjoy each other’s company and encourage one another.”

When Lorena took questions from the audience, she listened attentively and thought for a bit before she answered.   Nothing she said seemed rehearsed, although surely she had heard some of the questions before.  She engaged the audience in a sweet and generous way, and once the official performance was over, stayed on the stage for another half an hour for pictures and autographs for everyone who wanted one. 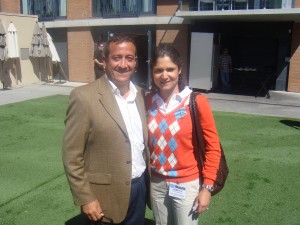 She then joined the conference delegates for lunch, again posing for pictures on the terrace, smiling and engaged and never once giving even the slightest hint that she wanted to be anywhere else.  Having seen perhaps too many “celebrities” in action over the years, I can attest that Lorena’s attitude and performance place her among the rarest of public figures: someone who genuinely embraces her admirers.   Too many celebrities savor adulation, but treat their fans in private with scorn.  Lorena was a fierce competitor who hated losing, even as a child.  She jumped from a tree as a five year old because her older brother could, breaking both her arms but not harming her spirit in the least.   Still, she conveys a beguiling modesty, and an animated and fun-loving sensibility that complements the security of her achievements. 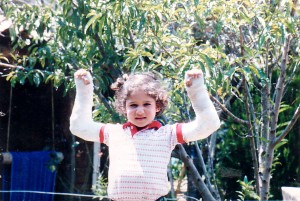 Always a fierce and fearless competitor: Lorena Ochoa at five.

The delegates left the conference mostly filled with optimism, slipping back into the developer’s default mode.  The last couple of years have been tough on the glass half-full crowd, but there’s hope renewed that the faucet is turning.

For more on the conference, go to http://www.mexicoresortdevelopment.com/