I recently spotted a picture of my brother-in-law, Lee Barrett—the guy I called the Happiest Man on Earth when he was invited at the last minute to play in the Oakmont member-guest last summer— staring at me from the cover of an old issue of a newsstand tabloid, the “All New Sun.” 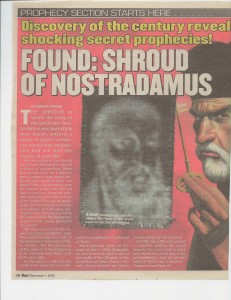 “Found,” shouted the headline: “Shroud of Nostradamus.”  “Scientists,” the Sun reported, had reconstituted the old Frenchman’s face from the ghostly shadows of the shroud.  And sure enough, the scowling face glaring out from the cover was unquestionably Lee’s.

When I showed him the picture in the Sun, Lee immediately dropped any pretense and confessed.  “Yes, it’s true.  I am the second coming of Nostradamus, but with all these self-anointed pundits on FOX and MSNBC, what’s the point of any genuine predicting these days?  There’s way too much noise in the prognosticating game.  I’m waiting for my moment to arrive.”

“You’ve done well keeping your secret,” I told him.

“I don’t want to sound too gloomy,” he acknowledged, “but the truth is, I gotta tell you, this planet is in for a world of hurt.”

“You have anything specific,” I wondered?  “And by the way, who you got in the BCS?”

“I’ve got a few bucks on the Duckies, but not even Nostradamus can move the line these days.   Long-term, though, football’s nothing.  Golf’s the lever that moves the world.”

“Think about it.  I have a reputation for being grumpy—true?”

“You know why?   For the simple truth is, once you learn to play golf, your life will take a very dark turn.   That is a certifiable true prediction—take it to the bank.   Proof?  You’ve seen the proof.   Not even Nostradamus is immune from the shanks, even when I can see them coming!”

It’s true—Nostra….I mean, Lee, gets a bad case of the laterals once or twice a summer.

“So when I should be thinking about when the next bubble is gonna burst or when the world’s gonna end, what am I thinking about instead?  Can I hit this wedge without enduring the agony of a flair into the woods?   No seer should ever pick up a golf club.  Even prophets need to be in the moment.” 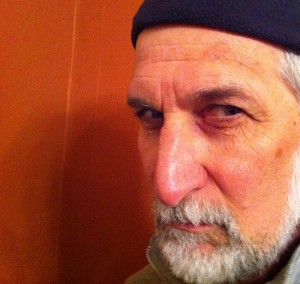 The New Nostradamus....Once Known as The Happiest Man on Earth.

There was a faraway look in the recycled sage’s eyes.

“And I will tell you something else that’s top secret,” he went on.  “You know the Chinese are mad for golf these days, right?   You think that happened by accident?   All those big minds in US intelligence circles—the ones who got laid off after we won the war in Iraq— have been working on the secret golf initiative for years.   Not even the Wikileakers could find this one.   It’s based on a simple line of reasoning: golf and happiness are profoundly incompatible.     And there is nothing else that can impede the long Chinese march toward world economic domination.  Only golf can deflect them.  Golf is like one of those brain parasites that changes your personality.  It’s has the kind of power that makes a mouse look for a cat to play with.”

Tom Friedman, you are so wrong.   The world isn’t flat—it has at last three feet of borrow.

“It’s obvious, isn’t it,” Lee continued.   “Nixon’s ping pong diplomacy was a feint, a ruse, a Trojan horse.   They were trying to infiltrate golf into the inner circles, and ping pong was a stalking horse, a way to convince the Chinese that sport was an instrument of good will.  And once they bought into that, bam! Here comes golf.   The CIA has been sending golf pros, golf course architects, and all kinds of golf officials to China as part of its undercover strategy to subvert the party leadership.  Golf takes their minds off policy and right into the bunker.  When they’re worrying about the yips and fretting over shanks, the annual growth rate of the economy’s an afterthought.   Their heads will be so full they won’t be able to even remember why they cornered the market on African minerals.”

“You want to know the future?  Here’s my prediction: as soon as there are two or three million Chinese golfers heading for the links, the growth of that economy will shut down faster than Tiger Woods hearing a shutter click.”