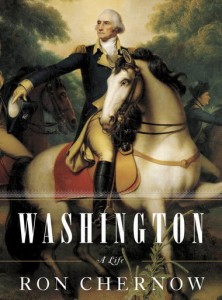 The noisy patriots clamoring to “take America back” might well wonder what traitorous voice would celebrate America as “an asylum for the poor and oppressed of all nations and religions”? It was George Washington, of course. A slave owner, land speculator and Indian fighter, Washington was transformed in fundamental ways by the experience of commanding men in battle whose lives were so unlike his own: free blacks, indentured servants, freehold farmers, urban tradesmen, artisans and landless laborers alike.

Washington came to love these soldiers, Ron Chernow writes in his comprehensive new biography, and they in turn revered him for his honesty, his bravery, his loyalty and his compassion.

Washington’s early life, in Chernow’s telling, was marked both by misfortune and good luck, often as two sides of the same coin. Relatives tended to die at convenient times, and a steady infusion of inheritances elevated him socially and financially, as did a felicitous marriage to the wealthy widow Martha Custis. He was a powerful and physically imposing man, too, and while he was devoted to his “amiable” wife, he enjoyed the adoration of women as much as he expected the loyalty of men.

But the ambitious young Virginia planter and frontier soldier didn’t become “George Washington” until he rose to prominence during the grueling eight-year war of attrition that brought independence to a quarreling collection of English colonies. The Revolutionary War, Chernow shows, initiated the process of melding the ragtag colonials into a new nation, and no one was more crucial in this process than the commanding general of the Revolutionary Army.

Chernow is not the first historian to conclude that in calling Washington to duty, history served up the right man at the right moment, but he makes a convincing case for Washington’s singular capacity to inspire and lead his countrymen, his success in urging them to reveal in crisis what Abraham Lincoln would call “the better angels of our nature.”

Although a book of more than 900 pages has the heft of comprehension, it inevitably makes choices about what features and periods of Washington’s life to emphasize. Washington was aware of his historical significance, Chernow writes. Even as he commanded the army in war, he asked Congress to “hire secretaries to make copies of his wartime correspondence.” “For more than two years,” Chernow writes, “clerks beavered away at the gigantic effort in Poughkeepsie, New York. They worked eight-hour days and filled up twenty-eight volumes with correspondence. Washington hoped this written record would stand as a polished monument to his wartime achievement — the perfect strategy for a man who shrank from over self-promotion.”

Washington’s struggle to reconcile his role as both avatar of human liberty and the rights of the common man with his ownership of human property was never resolved. Chernow concludes, nonetheless, that Washington understood the moral dilemma at the heart of the peculiar institution. How could he not? The British offered freedom to bondsmen who would fight for the Crown. They avidly sought it. One of Washington’s lieutenants even proposed offering freedom to slaves who would fight against the Crown, a plan Washington considered adopting. And again, why should he not have, given that many black soldiers served under his command? Still, when the British abandoned the colonies, Washington sought the return of former slaves who had sought refuge with America’s enemies.

“Washington: A Life” is a powerful book about a man whose example can still inspire. When British officers brutalized captured American soldiers, treating them as rebels and traitors, Washington refused to reciprocate. He counseled forgiveness, and kindness, anticipating reconciliation. In this way, the historic Washington summons comparison to the great contemporary nation builder, Nelson Mandela. Before reading Chernow’s thought-provoking biography, yoking these two world-historic figures would never have occurred to me.