One line down in the corner of the menu catches my eye:  “Coors Light $3.50.” Two bucks snares a glass of Cascade Lakes Brewing Company 20” Brown Ale or crisp, seasonal Paulina Lake Pilsner, brewed locally, not trucked in from Colorado. 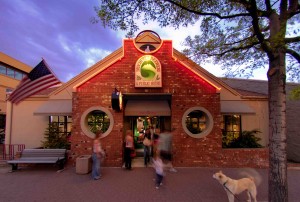 That’s indicative of an apt attitude, maybe even a civic aptitude, the sense about town that “we can do it well without overdoing it.”  Patagonia and North Face are preferred to Gucci.  People drive AWD Subarus with season-relevant equipment racks on top, not Porsches or never-seen-dirt Hummers. Labs predominate, Pomeranians don’t. Why?  It’s the east side of the Cascades not the Wasatch or Rockies.

I’m 25 years removed from untold winter days skiing on Mt. Bachelor, long ago returned to my native California, and I’m learning there’s a lot more to this ski town than just a ski town.

Osprey rule the skies over many of the high Cascade lakes, a pine-shrouded band of blue speckles small, medium and quite large strikingly arrayed in the shape of a fishhook and all located an easy and scenic (literally, Cascade Lakes Scenic Byway) drive to the west of Bend. Fish munchers who reputedly plunge to depths of two meters, osprey must see these lakes as a type of Market Broiler for raptors.  Paddling the waters of Sparks Lake, Terri and I witness no feathered dive-bombers in action. We do have two eagles hang gliding the warming morning air, bolts of gray-brown and white crown that appear, disappear, reappear against the backdrop of gray, brown and white volcanoes and back-lighting sky.   An osprey finally wings in, coming to rest on a tall snag.  Perhaps he’s a juvenile and hasn’t yet figured out that whatever fish are in a lake this shallow long ago were taloned and subsequently passed on to sushi heaven.

I envision Sparks as a mountain meadow, then 10,000 years ago Mt. Bachelor throws a Vesuvian tantrum, damming up what was the headwaters of the Deschutes River and forming the lake. Essentially a hard mangled sponge, the lava that contains and underlies the lake leaks like a sieve, so come this late into Indian summer, shallow is indeed shallow. Our guide, Jeff, talks about the strange note water hits escaping through the jagged ebony sides of the lake, and seeks out downspouts through its bottom.  “Don’t worry,” he says to a canoe of paddle neophytes, “the life vests usually keep anyone from being sucked in.” Ten seconds of potentially vacation-ruining angst quickly dissolves into two you-got-us grins one canoe over.

The bird’s water-level bust is my wife’s boon; though a strong swimmer she’s apprehensive about her first canoeing experience, and that she harbors some concern that I might “accidentally” upset the craft because I am, well, me, adds spice to the mix. After a quick lesson from Jeff, we’re off, and a lake bottom that never leaves her sight through crystalline waters makes her as natural and carefree as Sacajawea; that and the amount of preemptive splash she can muster in a back stroke that’s proportional to her perception of wholly unfounded threat.

We paddle for several hours, our Wanderlust Tours guide breezily talking us through area geology and hydrology, who lives in the woods and plies the air overhead, what grows where, why and how—ponderosa pine have three long needles in a cluster, lodgepole two, white pine five—with enough of human-era history to bring it all together.  Our thought was to take either the “Brews & Views” canoe tour—an afternoon of paddling followed by tippling courtesy of one of the local microbreweries, and, thankfully, Wanderlust handles the transportation on all tours—or one of the nighttime starlight paddles. Other demands intrude, as if playing golf or going to the spa or tippling on our own time can be considered an intrusion. 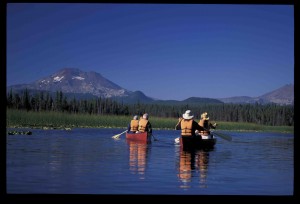 Canoeing the High Cascades with Wanderlust

Canoe mastered, kayak follows. The idea comes to us during a days-end wind down at the Old Mill District.  The district is just that, an old mill site from another era when another economic ethos held sway over the entire region. Brick, wood and metal speak to the timber industrialism of the past, three stacks rising out of the REI building run unused, silent and clean, with only the image reminding Oregonians of the ground-hugging musty aroma of lumber plants at work. The end result is a classically modern American retailtainment center. Theaters, culinary shop, upper-market retail, eateries, a moderne spin on the martini bar, mixed-use office and residential; the transformation in land-use is an improvement of some score orders of magnitude.

Locals float by the mill in steady succession, a gently riffled loop of the Deschutes their avenue, while walkers and riders, kids and adults, enjoy trail and parkland that run along most of both banks. Cocktails in hand, watching the sun slip behind the Cascades in an evening glory of orange, pink, lavender and dusk, we watch a woman head downstream, on a paddleboard, an Australian shepherd perched effortlessly on the bow. A sheep-herding dog from the dusty antipodes, imagine that.

“Keep your weight centered, arms in and low, hands here and here on the paddle, make no sudden moveme …”  I never listen to pre-flight admonitions, either.  I’m intent on the sun, seemingly seared in place in his midmorning position, obviously in no hurry to usher in the end of another day now that we’re both at the heart of that best time of the year in these latitudes, when summer moves to fall without giving much away. Nearly two weeks and our weather has been, as hackneyed as it sounds, perfect, with cool evenings, room temperature plus about 10 degrees all through the afternoon, cloudless skies, whisper breezes.  As I nearly go U.S.S. Minnow I’m jolted back, remembering in the nick of time the backpaddle, and look to see that Terri still is dutifully taking Kayak 101 from the attendant at Sunriver Resort’s marina; she’s a good sport like that.

We’re solo today, my Pinta to her Santa Maria as we explore the great unknown of the Deschutes.  Paddling into the main channel, we’re swept along at a breakneck pace of maybe three miles per hour; it’s flatwater not the Colorado in the canyon. Pines crash up against the broad ribbon of water, river grasses grow thick at the margins, happy havens for hundreds of noshing ducks. We’re visited by hawks, an eagle and oodles of nattering jays, and we pause to watch three dogs cavort, one dutifully retrieving a stick tossed into the easy current, one to steal the stick when the retriever swims it to shore and one to run circles since he’s a dog and it’s warm and the birds are either chatting or chittering and the grass is cushy and the air smells rich and happy and that’s just what dogs do.

Kayaks glide, moved more constantly and evenly by current and cyclical strokes to the soft piston-like pull-surge-pull-surge cadence of a canoe, and it’s easy to spin and backtrack to take in another look at shattered Newberry Crater and Paulina Peak on the southeastern horizon, geese coming in for a watery landing or the comely resort homes of Sunriver that are our companions on the starboard side for two-thirds of the trip.  Six miles and two to three hours downstream depending on pace and haste, the resort’s ground crew helps us beach our craft and drives us back to civilization.  Natty Bumppo never had it so good.

Though a high desert, water is the common denominator for all of Bend’s seasons, and a good deal more; beer, for instance. The craft beer craze isn’t unique to Bend within Oregon, or Oregon within the Great Republic.  But per capita, this state can stake claim to the keg-per-taxpayer title if quality of beer is one of the parameters, and with seven dispensaries of own-brewed suds, Bend-ers hold up their end of the bargain. Do the math, that’s one for every day of the week; almost sounds like doctor’s orders.

It’s like the slow food movement of beer, with most born within a saunter of downtown and drawn as much as possible on locally or regionally derived products. Deschutes Brewery is on the older/larger end of the scale—and likely most familiar to westerners who can procure Mirror Pond Pale Ale and Black Butte Porter quite easily.

Beer courses through Bend like the Deschutes, and there’s at least one of the former for every mood of the latter: A sharp IPA is the falls leading the river away from downtown; a smoky rich porter sits in as a lazy coil trading up through the darker end of the palette under the departing sun. As our time draws short, at least for this visit, we find a creation befitting the place and time of year. It’s from Deschutes Brewery’s public house, the company’s original outpost and its small-batch “laboratory.” The beer’s smooth, lingering, never bottled so it’s only available right at the source and aptly seasonal: