I’m certain Hawaiians have several thousand words for “green,” because everything here is green. Everything. Except for all the stuff that’s yellow and orange, red and magenta, purple; the wavelength span of blues that is the ocean; the marshmallow white billows of the shore break; lava, lava, lava in bronze-black. 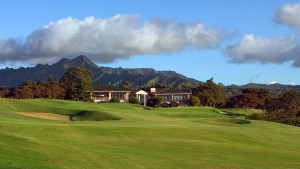 The starter rouses me from fantasy and I see it is reality. Such is the power of island golf, where the game is evocative and majestic, not just a game.

And I’m still on the practice tee.

Even from ability-appropriate tees, Prince is a stern test, rigorous; hell, it’s just hard and I even say inappropriate for high handicappers. I’m cool with that. Flat courses with parallel fairways are boring and golf is a game of earned reward not entitlements. Prince is a thrill ride. What you see is what you get, and when you can’t see play to what the full-info GPS—an artificially overloading intrusion of TMI most places—gives you and limit visits with Mowgli and Baloo.

Set between Prince and the neighboring Makai Course, Westin’s Princeville Ocean Resort Villas offers studio, one- and two-bedroom kitchen-and-laundry units in a casually elegant residential-resort setting. The bluff-top setting serves up ocean views from many units, waterfall-draped mountains from others. Two secluded adult pools, a family activity pool and one just for the keiki provide water-time fun for those who choose not to clamber down the nearby path to the shore. Barbecues are arrayed throughout the site, with cabanas and tables. Other amenities include dining, spa services, kids’ activities, and a gym. Though an ownership property, half the occupants are guests who can book through Westin and third-party sites. 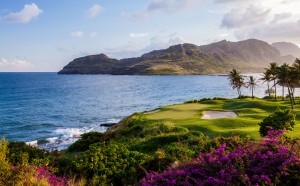 The names are an auditory twister.  The sea spray on #5 tells my nose in no uncertain terms where I am. The renovation is an eye stunner.  Sensory sensation is an essential part of the playing experience at new-look Kauai Lagoons Golf Club, even if that includes a few birds winging in to Lihue airport.

As with other top plays on the island—Prince, Makai, Poipu Bay—Kauai Lagoons has had a date with the plastic surgeon, who in this iteration looks remarkably like the greatest golfer ever, Jack Nicklaus, who coincidentally designed the joint in the first place.  The tale of the tape shows several new holes and nine fewer overall—for a total of 27.  New bunkers and greens re-clad with putter-friendly and less-snakey/more racy TifEagle highlight the ocean side of the course, which sports what is reported to be the longest stretch of contiguous ocean-front holes in the mid-Pacific. For families and the just-off-the-plane, get-in-a-quick-nine crowd, the restoration project set aside the Kiele Waikahe nine for user-friendly play.

The alpha routing consists of the Kiele Mauka and Kiele Moana nines, in respective order.   Mature and solid, Mauka harbors a few forced carries over barrancas not anticipated on such a plot of land, with wide, bending fairways sideboarded in dense stands of mango and guava and all other manner of tropical foliage. Downwind holes play monstrous long, even from other than the hero tees. Proving the golf gods get humor, I birdie the 453-yard left-sweeping par-4 4th despite a hairy lie—it is tropics-fueled Bermuda—a green draped in three beaches worth of sand and today’s wind that is definitely not prevailing.  Mauka is next in line for an appointment with the Golden Bear for new bunkers and greens.

The new holes, greens, white silica bunkers and verve show up on Moana, where along the northerly cliff face of Nawiliwili Bay—from the 4th hole approach to the climb up to eight tee, roughly Ninini Point to Kuki’i Point—players quickly learn the translation of “moana.” With that big blue roiling away just below, saw-topped, emerald-clothed mountains rising beyond, the either-side-of-200-yard 5th is Kauai Lagoon’s entry into the islands’ best over-the-cove hole contest.

Moana traces an arc around Marriott Vacation Club Kauai Lagoons, a four-story complex of 72 two- and three-bedroom condos with course, moana, bay, pool and mountain views. Full kitchen in marble and stainless anchors a great room with a slideaway glass wall to a large lanai.  Rooms are spread to the periphery of each unit to give needed family and friend space while vacationing together. The resort concierge can arrange off-site excursions, from ATV rides to scuba, and a shuttle gives guests access to the course, tennis center and the Kauai Marriott Resort & Beach Club; be a turista, it’s OK, have dinner on the sand at Duke’s. …

Stay tuned for the next installment in this four-island golf getaway.