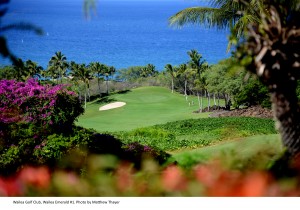 Golf is a day spent in a round of strenuous idleness.

Well, Mr. Wordsworth, that’s exactly why the best rounds carry over to an additional “hole.”

Go anywhere you want in the vibrant, diverse American West and you’ll find a stunning spot for some of that strenuous idleness. What you might not recognize is a grill, bar, restaurant—19th hole—that is just as noteworthy. Be it adult beverages, food, setting or even history, from surf to saguaro here are some spots worthy of a post-round idle; the golf doesn’t exactly bite, either.

First 18: Recently treated to a wall-to-wall refresh, Prince again goes toe-to-toe with Kapalua’s Plantation Course and the Big Island’s Mauna Kea and Mauna Lani in the ring of Hawaiian golf supremacy. Alternately skirting and leaping the jungle lushness of Kauai’s North Shore, Prince is a play as noted for its drop-dead scenery as its demanding – if not quirky – Robert Trent Jones, Jr. design.

19th: Not just drink, but Margaritas, which is eminently fitting here in the Old Pueblo, down near Mexico way. There are several cardinal rules to making a proper Margarita, and Catalina pays them allegiance.  Nothing is blended.  There’s no such thing as strawberry or peach. The sweet-and-sour is house-made. The tequila is bueno, not Jose-in-college grade, and silver. Triple Sec is banished. “Catalina” gets fresh lime and a float of Chambord; “Cadillac” is splashed in fresh orange and Grand Marnier. Both get Patron. These refreshers have few peers in desert post-golfdom.
Catalina at Starr Pass

First 18: Truth be told, the number at Starr Pass is 27, but saying “let’s beat feet to the 28th hole” just doesn’t resonate. The golf here once challenged the PGA Tour’s best, who complained about its severity. Hacks love the audacity of rock, cactus and arroyo through which the course is woven.

19th: While it might seem criminal to end a day at America’s most iconic seaside course hunkering down indoors, with no view of what Robert Louis Stevenson deemed “the most felicitous meeting of land and sea,” rounds at Pebble are notoriously slow, offering a good five hours or more to soak in all that aesthetic goodness. The Tap Room is an essential part of the Pebble experience. Kick aside the popcorn shrimp and Buffalo wings from the appy menu and you have a perfectly time-capsuled setting of gin martinis, Prime beef, liveried staff and a Smithsonian Light lesson in the near-century history of the course, it’s beloved “Clambake”—now corporately dressed up as the AT&T Pebble Beach National Pro-Am—and the five U.S. Opens contested on the grounds.

19th Hole: While Gannon’s—named for owner/restaurateur/chef Bev Gannon, another of the originating “regionalists”—is notable for its island cuisine, a short-order jock slinging plates of spam musubi and loco moco could earn a Michelin star simply because of the jaw-dropping setting of the restaurant and bar. The immediate view is of green course and black lava, puffed over in the vibrant shocks of bougainvillea. Beyond is Big Blue and the right shoulder of Kahoolawe. Swaying palms bracket the intermediate frame. And unlike some islands courses with all-star views, it seldom rains down here on the warm, Haleakala-protected southwestern shore of Maui.

First 18: Players are in luck as Wailea comes at them with three courses—Blue, Emerald and Gold—each paradise-hued and offering a challenge suited to particular tastes and needs, from the hop-off-the-plane, this-is-a-great-warm-up cheer of Blue to the top-shelf challenge of Gold on over to the underrated cool of Emerald.