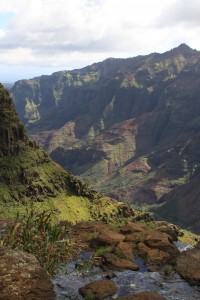 Waipoo Falls ... Really, This is Where it Starts

Passing a young couple on the track, we stop to answer their inquiry, and I assert, confidently and hopefully soothingly, that the trail does indeed start out on this jeep road before hitting what can be called a proper trailhead.

“And the waterfall is after that?”

The guy flashes a shaka and off they stride as confident as Magellan into the unknown. My graying hair lends an obvious air of authority because everything I know about this particular encounter I picked up from a guidebook during the flight over.

The hike to Waipo’o Falls in Waimea Canyon State Park crashes ever-downward to an edge-of-the-world climax through the type of plantscape that brings film producers to these islands to capture background for the latest and greatest Dinoflick.

“Wild ginger,” Terri advises, her botanical street cred bolstered by native-flora artwork she’d seen in Lahaina.  Man-high, Christmas-in-spring curtains of green with fiery red spires choke both sides of the road.  My savvy stops at calling out the eucalypts and raspberry brambles, stuff I know from back home.  Hawai’i is thick with exotic, invasive species like these berries and gum trees, and some are true banes.  A vine noses out, studded with gorgeous purple-blue flowers, and I grab it in 15 megapixel mega-glory, and then rue that it’s probably one of those unwanted invaders from elsewhere.  (Sadly, it is.)  A good 45 minutes rolls by and we’ve not even reached the trail proper as we gape and gawk and guess at all the chlorophyllery . 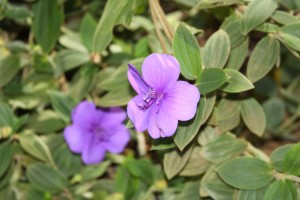 Princess Flower, but one of the many invasive non-native species hammering the islands.

“And we didn’t buy that fin-and-fern guide, why?” I ask.  Terri doesn’t need to remind me that it is now customary in our travels to regret not forking over a Jackson to get a book that will identify who is chirping and which plant cured the first inhabitants’ tummy aches or got them high.

The road’s flattened and short of a mile out it forks.  There’s a sign sending us that-a-way, and we reach Canyon Trail in several minutes.  The sign’s almost shocking as there’s such a way of, “Over there, brah, you’ll find it,” to Hawi’ian direction-giving. It stands in stunning contrast to the assault of information thrown at us in lawyer-nuts California. In a quarter-mile we hit Cliff Lookout.   Clearing the forest I grab the Canon and drop the backpack where my feet no longer will be in a nanosecond.

Some 3,500 feet deep, 10 miles long, a mile across, dolled up in enough variations of green, red, green, orange, green, yellow, green, purple, green, brown and green to render inadequate every paint swatch at Home Depot, Kaua’i’s Waimea Canyon is the Grand Canyon of the Pacific. It’s the type of spectacle Vegas would announce with hundred-foot-tall tubes of neon-filled glass, but thankfully the ninth Hawai’ian Island isn’t in charge of the other eight.

And I’d guess we’re about half-way between the unseen bottom and rainforest-clad top. “It’s sooooo beautiful,” Terri exclaims. “It’s unreal.  Bryce, Zion, the Grand Canyon all woven together, in the tropics.” Then we are silent.

On the drive up the canyon was socked in, so the viewpoints only could betray a thread or three, not the entire tapestry.

Collecting our tongues and camera bag, we backtrack briefly to the main trail and for a mile tumble, rise and mostly tumble through a jungle of increasing Cretaceous outrageousness that breaks before a slickrock ridge.  It’s a red-orange epaulet on the canyon’s olive-lime-jade shoulder, and with this giant that puts his “feet” a good one-fifth of a mile below. Across the ridge—it’s a broad safe path though steep and slick in places—and another quick dash through the greenery, we reach one of the spigots of erosion, though here in calm repose.  Explorers nosh by the pool, feet chilling in the refreshing waters, while others like us rock-scramble over the tumbledown boulders for a better perspective; a few stare curiously at the riot of growth.

“Wild ginger,” I say with prideful authority, ever the botanist. 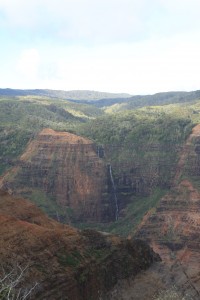 Waipo'o Falls is visible from several spots across the canyon.

Our goal nearly at hand, we amble the last little ways to another series of pools and the rim of the universe, or at least this one sliver of the universe.  Over a cobble of stairsteps, braided veins of water mingle, combining strength and maybe even nerve, and off they go.  A leap of faith over the edge into the unknown, a two-tier one-way ride on the Gravitycoaster and then a reunion 800, 900 feet below—for the stream, that is, not us.

Terri and I settle in for a spell, Kaua’i’s heart opened in a kaleidoscope of hues to rival those of the daily explosion of rainbows here.

“Zion, Bryce and the Grand Canyon in one helping?” I think.

Good stuff.  And the Mai Tais are way better here than in the redrock southwest.

Several guidebooks suggest driving down the graded access road to the trailhead.  Umm, no.  I checked with a local guide, Micco Godinez of Kayak Kauai, and he advises against it, preferring to hike down with clients.  “I’ve been in there when it started to rain, and I sweated it,” he says, and he drives a 4wd truck. Parking is available on the side of the road near milepost 14 on State Hwy 550, across from a government missile-tracking facility.

This is an out-and-back hike of approximately 5 miles that drops 600-700 feet in elevation.  It’s an easy jaunt for those who know how various machines in the gym work.  For those of us packing a few LBs, let’s call it moderate.  Allow several hours, including gawking.  And if it’s not apparent to this point, the hike leads to the top of the double-jump falls, so you don’t really see the fall.

People hike in everything from flip-flops to hiking boots. Closed-toe footwear, including river sandals, work best.  Walking sticks are not necessary but helpful.  Wear a suit if you want to cool off in the pool or stream.  Carry water.