The PGA Tour makes its way to Texas for the Valero Texas Open, which is played on the demanding 7,435 yard Greg Norman designed TPC San Antonio AT&T Oaks Course, which had some input from Sergio Garcia.

It’s a tough track and any player who suffers from claustrophobia will not enjoy the tight narrow tree lined fairways here. If you miss the first and second cuts of rough you are in deep trouble, with thick knee-high native grass just off the second cut of the fairway.

Once a player has negotiated the tee shot then they have to aim at greens that are guarded by 12-foot deep bunkers. The greens are in near perfect condition and ample in size but they have plenty of movement in them, with lots of slopes, undulations, spines and ridges.

My Tips to Win:

Zach Johnson 16/1 has won the Texan Open twice and the Iowan already has a win to his name this year, he currently sits in the Top 10 of both the FedEx Cup and World Rankings. Zach hasn’t been in great form since the Humana Challenge, but being back at the TPC San Antonio should see him back to his best this week.

Joint favourite this week is local lad Jordan Spieth 16/1 and I think he will want to make up for last year’s disappointment when he missed the cut. Jordan has played nine events so far this year and made the Top 25 in seven of those with three Top 10 finishes. Now in his second on tour, I am sure he will be able to cope with the pressure of playing in his home state better this year. 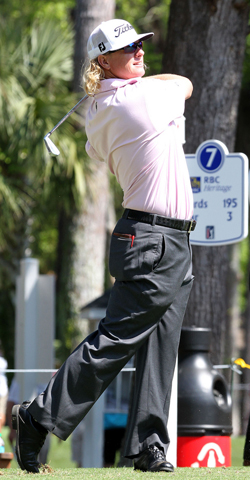 Charley Hoffman 25/1 seems to be coming into form just at the right time for one of his favourite tournaments of the year. Charley has had two Top 25 finishes in the last couple of weeks and has finished inside the Top 15 in this event every year since 2009 and that run includes a runners-up and last year’s third place placing.

It’s hard to tell what Kevin Chappell 40/1 will turn up and do this week, but the California has two Top 25 finishes in the last couple of weeks with a missed cut sandwiched in between. But the lad has a solid short game, which is reflected in his stats Top 5 ranking from 75-yards and in. Kevin had a runners-up finish here in 2011 and finished in the Top 15 again last year.

Brooks Koepka 66/1 had three wins on the European Challenge Tour last year and had a Top 5 finish at this year’s Dubai Desert Classic. But the Floridian who plays on the European tour looks to be trying to gain his PGA Tour card with sponsors invites. Last week he finished just outside the Top 25 at the Arnold Palmer Invitational firing a final round 69 and will no doubt come into this week with plenty of belief he can achieve his goal.

Sean O’Hair 100/1 is this week’s outside tip and is another local lad. Sean should come into this week in confident mood after his final round 67 at the Arnold Palmer Invitational which saw him move up the leaderboard thirty-two places.