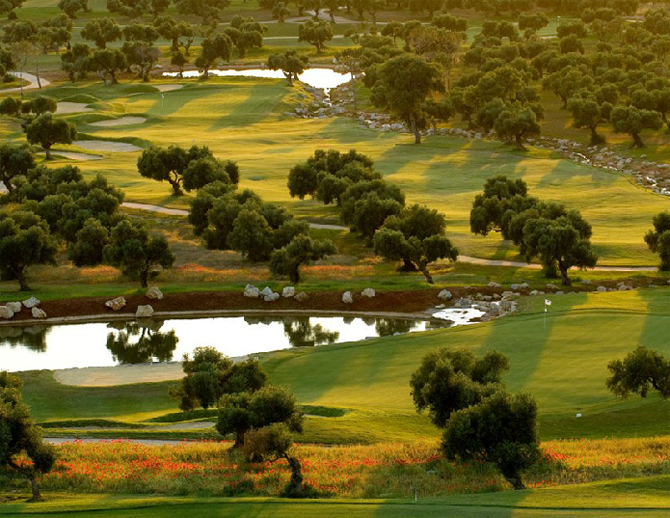 Looking across the 6th and 7th holes at Arcos Gardens

Day 1: Once again the weather was hot with a breeze that made scoring interesting and putting even more so, the big greens tested the players nerves, but good golf was rewarded with birdie chances.

Early leaders were Max Bosse, Dan Aldridge and Paul Netherton, all were level par after 8 holes, with young Ben Cannon just two off the early pace at +2.

The back 9 at Arcos Gardens is a tough test of golf and making par was proving difficult for the early leaders. The par 4 11th measuring 481-yard uphill was proving to be a tough test into a strong head wind, most players struggling to hit the green in two, even with a 3-wood. Netherton holed from 20 feet to save par and kept his score at one over.

Max Bosse was playing steady golf and finished with a +2, 74 to finish the day on top of the leaderboard, Paul Netherton was a shot back on +3, with a host of players a further shot back on +4

Day 2: Saw the wind drop and present the players with a much more benign course and offering plenty of birdie chances. First to make a move was Netherton who made a birdie at the third, while Bosse made bogey at the first, which saw Netherton take a one shot lead.

Even with the wind down Arcos Gardens still requires concentration and a lack of that cost Netherton a double bogey at the sixth, letting Max Bosse back in to reclaim the lead and take his one shot advantage into the back nine.

Michael Downes playing with the leading group was having an interesting day, great golf from tee to green saw him set up numerous chances to build a great score, but he was having no luck with the flat stick and a succession of three putts cost him dearly. 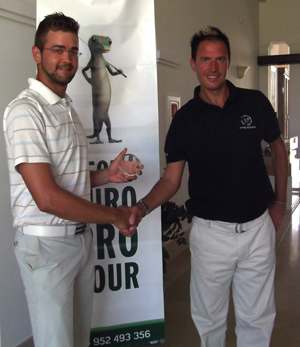 Max Bosse receives his cheque from Tour Director Paul Netherton, who he pipped at the post

Coming into the stretch Max Bosse had ground out a three shot lead going into the last four holes, but this was gradually pegged back by Netherton with some great golf. Standing on the 18th tee Bosse’s lead was down to a single shot. Under pressure Bosse played the shot of the day, a seven iron over water to 6 ft to see him close out for victory by a shot from Neatherton and secure the Arcos Gardens Trophy.