John McGuire, a San Francisco-transplant from Galway, Ireland, is the absolute envy of his brother, still residing in his native land. “He is sickened by me being here working in the golf business,” McGuire, longing for his Irish home, admits. Nevertheless, with a technological assist, even the separation of eight time zones does not damper the spirit of competition between the two brothers at the game they both grew up playing on their homeland links.

After a ten-year career in the telecommunications field, brother John decided to head down the entrepreneurial fairway and, with an emphasis on sports performance, established Active Mind, a clinic designed to help people establish both personal and professional excellence in life and work. But within six years, like a golfer after nine holes, John was once again ready to make the turn to a new adventure and with an attempt to capitalize on his love of sports and career background, he went for the risk-reward shot by uprooting his wife and children to the hi-tech capital of the world in the San Francisco Bay Area. Fortunately, it also provided him with a rich supply of golf courses as testing grounds for his new venture, GAME GOLF, a wearable technology and integrated software platform for golf.

Lee Westwood wearing the GAME GOLF device on his belt

Without question, there is a flood of golf apps available for smart phones but one, while playing, the right thing to do is put away the phone and two, who wants to be constantly distracted checking or inputting data while playing? It not only impacts the pace of play but the app sucks the juice from the battery. This is where GAME GOLF sets itself apart.

So, tee it up and stuff the phone in your golf bag. With the help of positional technology and motion sensors, GAME GOLF seamlessly records every shot location, distance, fairway accuracy, club selection, putting and then syncs all the data to the cloud for viewing on a mobile device or the web.

Small sensors fit firmly into the grip of each golf club

This allows for the experience to be more engaging, visual, interactive, shareable and social, both on and off the course.

“Our wearable technology captures a player’s entire game of golf without any input from the player while playing,” says McGuire. “After your game all your information is sent to the cloud where you can map out your entire game and improvement over time through a simple visualization of your game with the help of many collaborative features. We want this to help your game, not technology to get in the way of game.”

With backing from two of the world’s top-ranked golfers, Graeme McDowell (wore the device during last year’s Masters) and Lee Westwood, plus other high-profile golfers expressing interest, GAME GOLF is targeting Summer 2013 to hit the market. To reach that goal, the company is taking advantage of Indiegogo, a crowd-funding campaign to raise money and, so far, approximately 1,300 “funders” have brought in close to $250,000 to become early adopters of the device.

At a cost over $1 million to design by Yves Béhar, Chief Creative Officer at Jawbone, the maker of the wireless JAMBOX speaker, GAME GOLF is both intuitive and not overly jammed with information. There is just enough to get you hooked and the potential for more features to be added based on feedback from the GAME GOLF community. 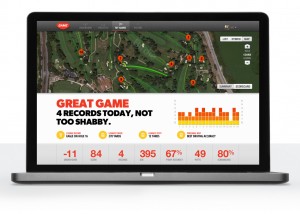 In essence, McGuire is actually trying leverage technology to create an experience allowing people to change their behavior and to see and compare their rounds of golf. For instance, if you wanted to share your longest drive or longest putt, GAME GOLF makes this possible with anyone wherever they are throughout the world via social networks. If it works for golf, McGuire will be ready to tackle another activity.

“Our objective is to become a world leader in performance improvement systems for the sports you play,” says McGuire. “A new era of quantification and gamification is rapidly and radically changing the way we live, work and play and we are developing innovative, engaging fun systems that tap into collaboration – independent of location.”

Will GAME GOLF revolutionize the playing experience to add some much-needed spice to the game? Time will tell but for now, at least the McGuire brothers can match up on two different continents and maybe, just maybe, toast a virtual Guinness to the victor!