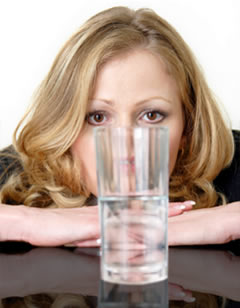 Is the Glass Half Full or Half Empty? I say, "Neither." Don't forget how valuable the air and space are too!

A few years I had a friend and client I shall call “Gloomy Glenda.”  She could manufacture the worst out of any situation.  Miserable would not be strong a  word to describe this woman.  Always worrying, her children, neighbors,  ex-husband, parents, co-workers, boss, etc. always were problems.  She seldom had a positive word or outlook to express about anything.

Glenda never enjoyed her vacations and seldom did she ever enjoy a meal, music, or nature.  And  laughter?  Forget it.  It was always too hot, too cold, or too rainy.  Of  course, this gloomy perspective extended to her view of herself as well.  A very attractive woman, she never acknowledged the fact and felt she had too many wrinkles and was too fat – even at a size 2.  Glenda never had enough money, and  was always having problems with her home, appliances, car, and you name it.

Guess what?  Gloomy Glenda contracted cancer and was given 18-24 months to live.  She had a history of nearly fifty years of irritability and she was just plain unpleasant and difficult to be around – a pain the neck to put it politely.

After the inevitable anger and resistance, we figured out that all these things that she held so important and she felt so critical about really didn’t matter.   In a short period, her body would be gone and she’d simply be a memory for those  around.  All of a sudden it dawned on Glenda that all her fears and frustrations really didn’t add one bit to her life and most likely shortened it.  The joke was on her and finally she got it.

Glenda had worked so continuously on keeping everything and everybody under control, but now she was losing control.  It became liberating.  What for once when she would never  give up, now she was forced to.  The more her body fell apart, the happier she became.  She was grateful that she had months to finally let go  and enjoy her life.  Her personality transformed and she wore a beautiful smile and exuded a warm inviting energy.  Those she had kept at a distance were drawn  to her – and not because of her illness, but her loving joy.

Everyone in her life became fond of her.  She like they basked in this new found glow of hers.  There was no miraculous remission for Glenda as the cancer spread.  At the end as Glenda was nearing death she lapsed into a coma.  Her family and friends gathered around her looking just as gloomy as Glenda had long been.  Then sometime really funny happened.  Just before Glenda  died, she opened her eyes to see the sad fearful looks of those gazing at her to which she asked, “Is something wrong?”  She died laughing.

If Glenda can get it, we all can.  Does it take a life-ending cancer to wake you up to all the beauty, joy, and miracles that surround you?  When we lighten up and look for and experience the joy all about us, our life becomes heaven.   Glenda taught me that in spades.  By the way, she had a most beautiful smile and I bet you do too!