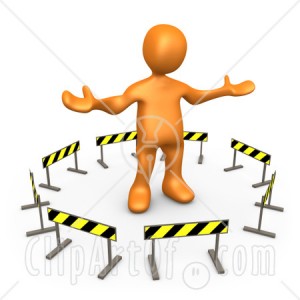 You say, “Bob, that’s too simple an answer.  Surely there must be something better to do when you’re stuck than simply doing something different.”

Let’s look at the basic issue behind your blockage.  It’s likely been formed by the the beliefs you’ve had, the decisions you’ve made, and the actions you’ve taken – nothing more complicated than that.  So the solution need not be complicated either though our ego would often like us to think so.

We all encounter blockages, detours, plateaus, and challenges.  There is the often used saying that employing the same thinking to resolve a problem that created it is is the definition of insanity.  That said, it is amazing how so many intelligent, highly educated and trained folks forget to try this tactic – to do something different.

The common responses to fixing “being stuck” are stubbornness or trying to analyze and “figure out” something better.  Too often that is bad medicine especially for when you don’t seize upon a solution, you become even more disheartened or frustrated thereby fanning the flames of fear.  A better tactic is to simply try something different.  It could be as simple as stop and take a break, changing your position or location either figuratively or literally or both.  Take a few deep breathes and look around.  Stand up, sit down, walk, run, drink, sleep, chat, meditate, sing, take a shower.  And if you’re not stuck, what does it matter?  The important thing is to do something different – separate and distinct from your habits or normal response.  By avoiding your old automatic responses you immediately wake up out of the sleep mode and new sources of creativity open up to you.

Sound too simple?  It works!