The 453-yard par-four 5th hole at Cinnamon Hills kisses the tranquil waters of the Caribbean and is but one of many scenic delights to tease or please you!  (Photo by Robert S. Fagan)

It has been reported according to local folklore that Elizabeth Barrett Browning penned “How do I love thee, let me count the ways” somewhere on or about the Cinnamon Hill golf course site just outside Montego Bay, Jamaica. Well, now there are eighteen different delicious varieties to “count the ways” with the advent of the Cinnamon Hill golf course. Along with the venerable Tryall Golf Club and the spectacularly expansive neighboring White Witch, I consider Cinnamon Hill one of the three must-play courses in Jamaica sandwiched between the Jamaican mountains and the stunning Caribbean on over some 400 acres. (Some may also consider Robert Trent Jones’ Half Moon Golf Resort, but that course site is a relatively average one.) 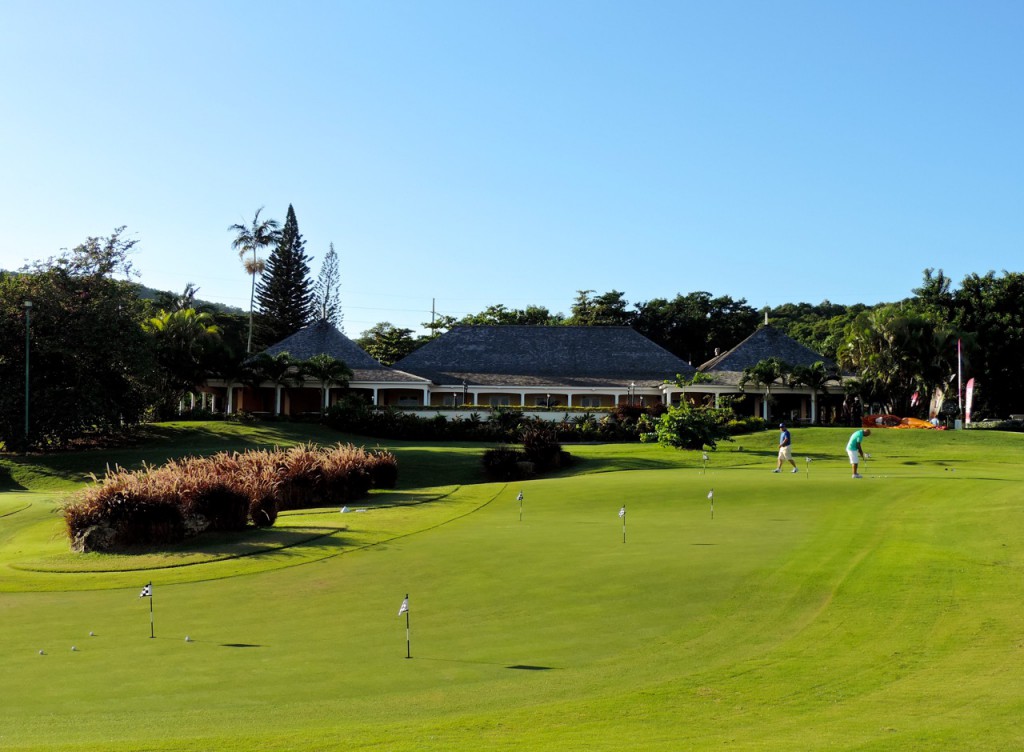 What a wonderful way to start your day – golf at Cinnamon Hill outside of Montego Bay. Above is the Clubhouse and putting green area and below is the view of the par-five first hole from the forward teeing areas.  Don’t miss it right!  (Both photos by Robert S. Fagan) 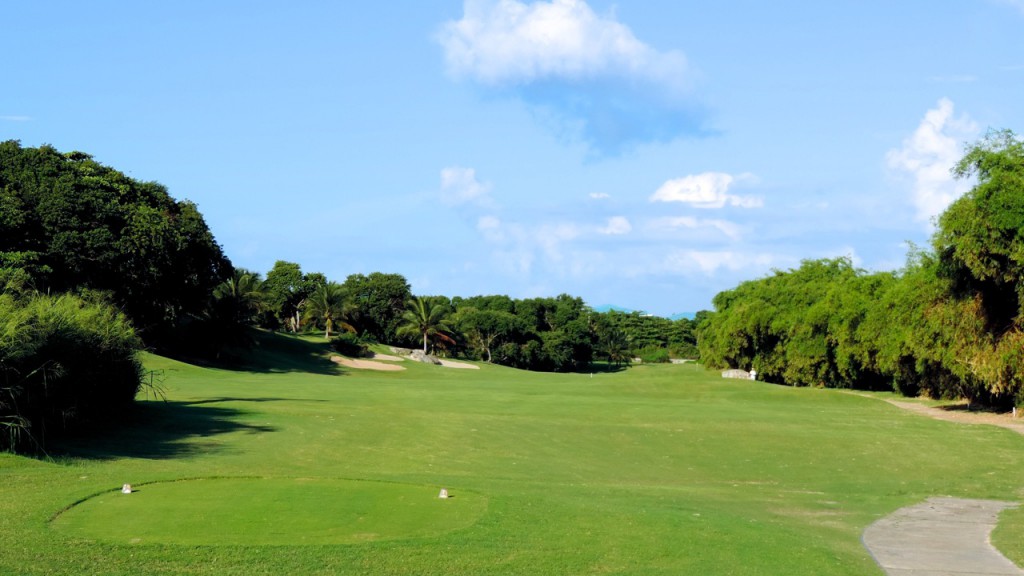 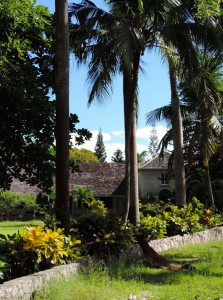 A glimpse of the Johnny Cash Estate. (Photo by Robert S. Fagan)

Fashioned more like the traditional, more muted shaped Tryall Golf Club, Cinnamon Hill also is a tale of two golf courses. Cinnamon Hill began as Three Palms Ocean Course in 1969 of Hank Smedley design, but went through a redesign by Robert Von Hagge in 2001 to bring it more in line quality-wise with its neighboring White Witch that Von Hagge and his associates built from scratch a year earlier. It is a parkland variety layout that begins in the lower portions of the property and kisses the majestic aquamarine blue waters of the Caribbean for two holes before returning back to the clubhouse and climbing into lush mountainous jungle golf. While the front nine might evoke comparisons to Tryall, the back nine shares the same rugged, undulating terrain as its neighbor White Witch, but without the more modern, stylized shaping and as bold bunkering.  It is on this incoming nine that your caddy will invariably point out the Johnny Cash estate to the left of the downhill 14th where his family still visits or the area behind the 15th green where scenes were shot for the James Bond movie, “Live and Let Die.” This area is also the former Rose Hall plantation site shared by White Witch that was inhabited by the devilish Annie Palmer and your caddy will be happy to relay that rich lore to you as well.

Speaking of caddies, you will need them most to read the greens and club you. With not only a strong grain, but some severe slope, if you don’t heed the advice of their experienced caddies, your putting could turn horribly wrong. In many ways, the greens are the primary defense against par at Cinnamon Hill. Though longer on the card at 6,828 from the tips than its neighbor, I have alway found it to play much shorter with more downhill holes compared to a only two dramatically uphill ones both on the back side (11th and 12th). In fact, I consider Cinnamon Hill an easier golf course than White Witch, but not altogether an easy one. I have played with relatively unknown touring professionals who effortlessly glided around the layout in 62-64 for its par-72 plays more like a par of 67 for them with all the par-fives ripe for the taking. Yes, the power hitters can bring Cinnamon Hill to its knees, but should they be wayward, Cinnamon Hill will have the last laugh. Patience off the tee on several of the holes is the sage way to play, at least for all the more wooded holes on the clubhouse side of the highway that intersects the course – you won’t be able to play from the jungle!

From the fairways, the putting surfaces at Cinnamon Hill appear fairly routine, but as you get closer, you discover that they are anything but. While one must always be cognizant of the grain of the grass in this part of the world, Cinnamon Hill has both some severely and moderately sloped greens that you must take into consideration not only with your putts, but your recovery shots as well. These greens are built to defend par and you best approach them from below the hole. 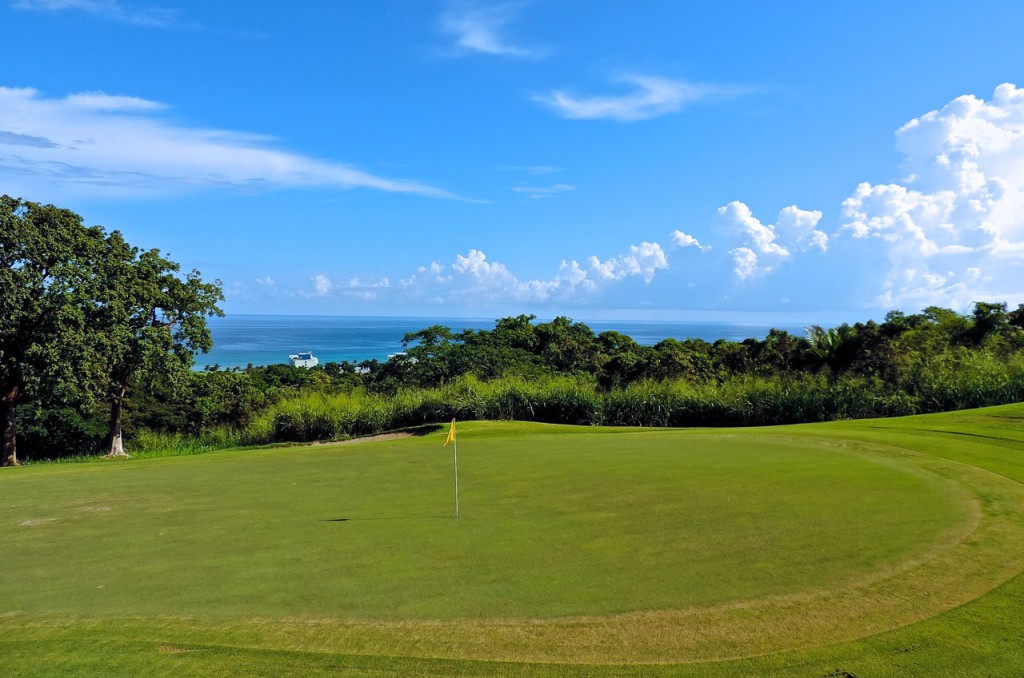 The greens feature some treacherous as well as subtle slopes, but nonetheless defend par as illustrated by the elevated surface on the uphill par-five 11th hole.  (Photo by Robert S. Fagan.)

Aesthetically, there is much to recommend the course. The 4th through 7th holes (pictured below) are a wonderful stretch with the par-four 5th heading down to the Sea and the par-three 6th hitting over it are quite the photogenic highlights. The finish from the 14th hole in is likewise a very beautiful run with which to finish your round (also pictured below). The rest of the holes in contrast are relatively benign, average in comparison. However, when one appreciates “flow” and “pacing” in golf course architecture, you can appreciate getting starting into your round and enjoying an interlude in the middle of it before the climax may really add to the overall playability and enjoyment of the Cinnamon Hill test. And while the outgoing nine is quite walkable, the incoming one is not. Anyway, riding carts are included in the green fee.

Above is a view of the par-three 177-yard 4th hole where an elevated tee, pond, and often a breeze make both proper club  selection and execution paramount.  (Photo by Robert S. Fagan) 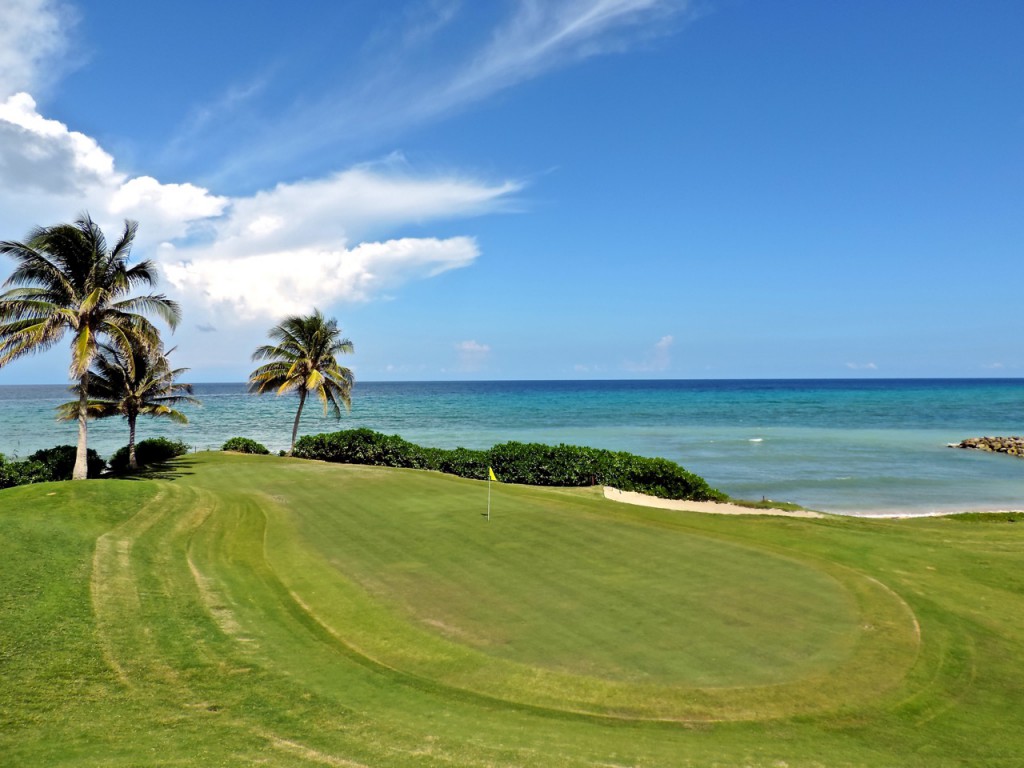 You can feel, hear, and smell the sweet Caribbean from the putting surface of the par-four 5th hole above.  (Photo by Robert S. Fagan) 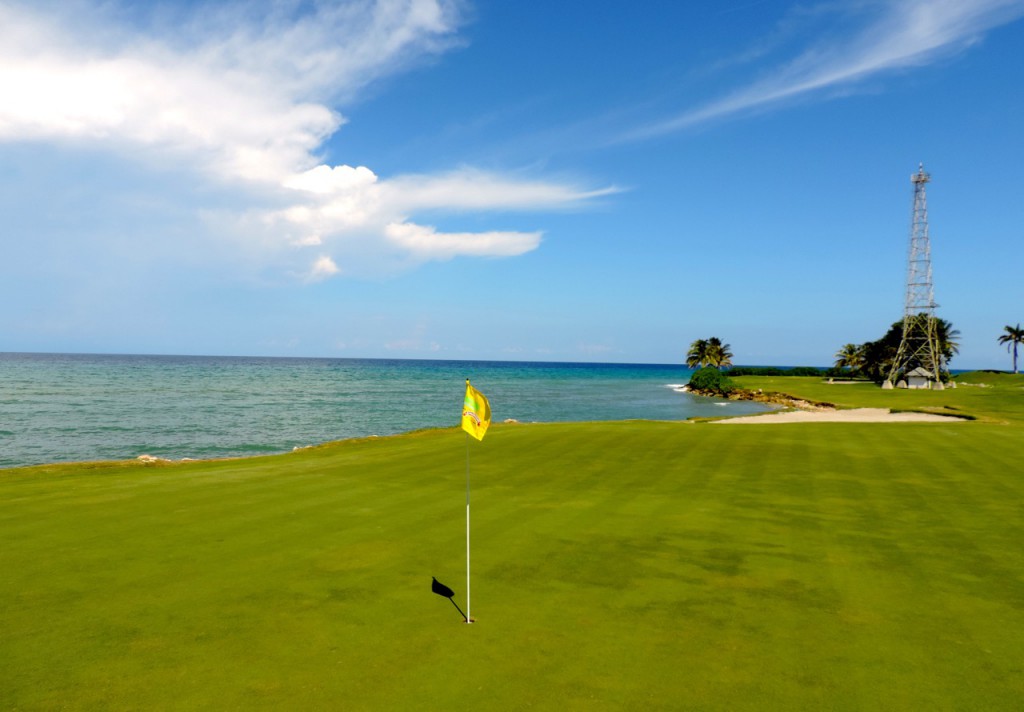 Looking back toward the tee, the par-three 168-yard 6th hole is “All Caribbean!  (Photo by Robert S. Fagan) 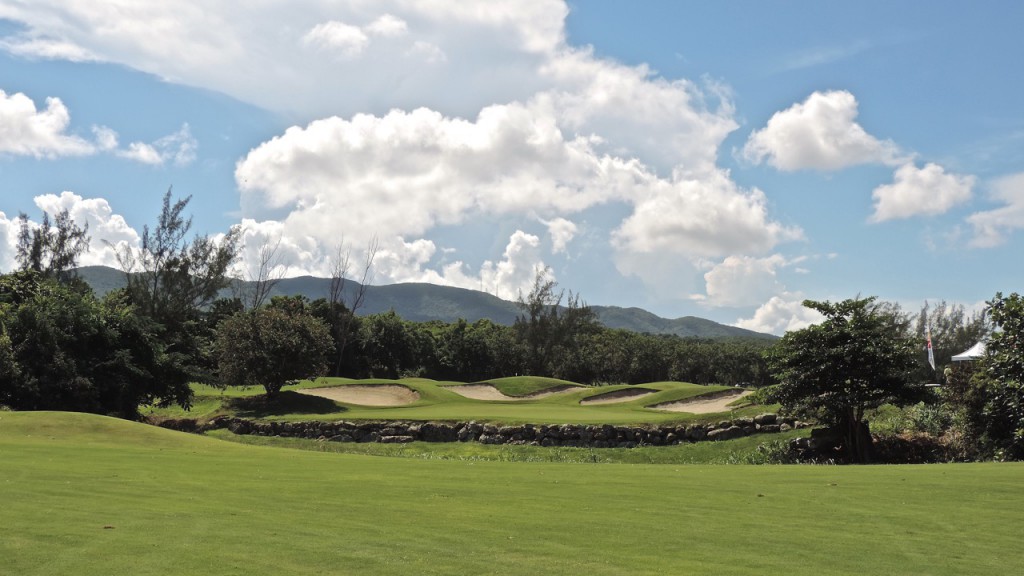 There is little room for error on the approach to the uphill 405-yard 7th that retreats back from the Caribbean shown above and below.  (Both photos by Robert S. Fagan) 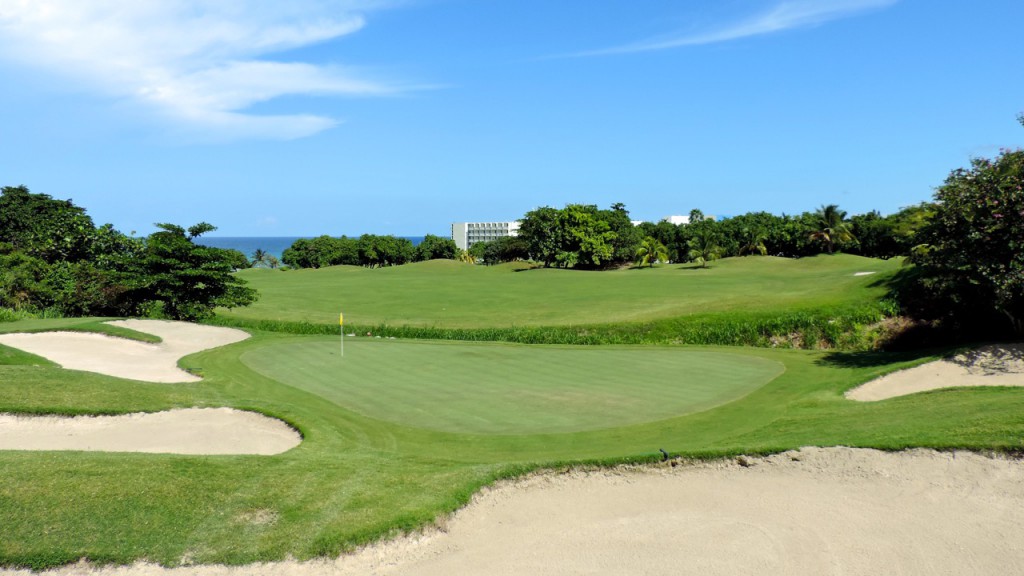 Given my affection for Cinnamon Hill over several visits, it pains me to report that the same malaise that has affected the overall conditioning at adjoining White Witch was also present here at Cinnamon Hill during my last visit to both in late 2014. Some of the greens are terribly bumpy with bare spots and the overall conditioning is not consistent with the relatively dear green fees. Without greater sustained attention, both courses that have been very adequately maintained in the past stand to fall out of the category of “recommended” leaving Jamaica with only Tryall as an elite Caribbean attraction. Suffice it to say, if you are critical of conditioning and your green fee investment, do your homework before committing to a tee time. Hopefully their once good conditioning will soon return and this will be a non-issue. 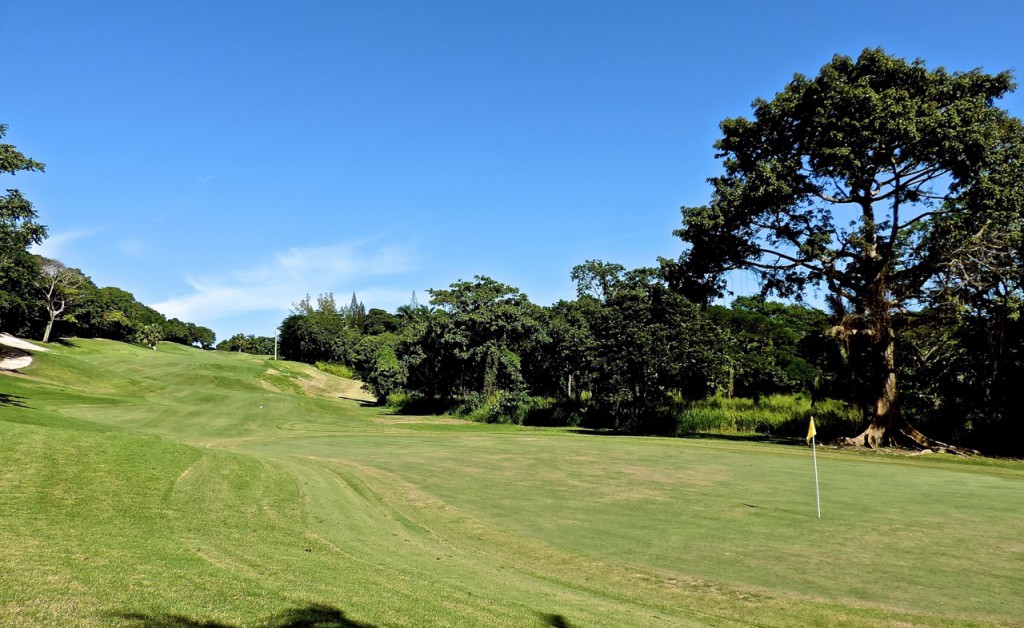 You had better find the sidehill, downhill fairway on the 428-yard par-four 14th if you hope to putt for a birdie.  (Photo by Robert S. Fagan) 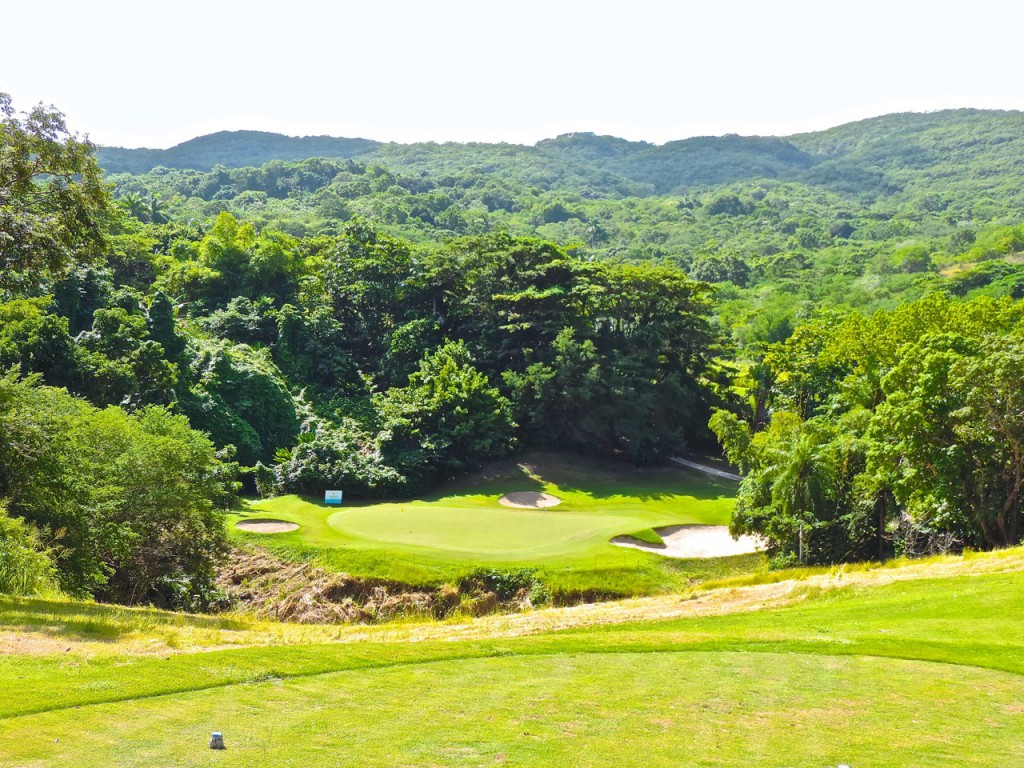 Trouble short or long on the 220-yard 15th hole, scene of the James Bond filming.  (Photo by Robert S. Fagan) 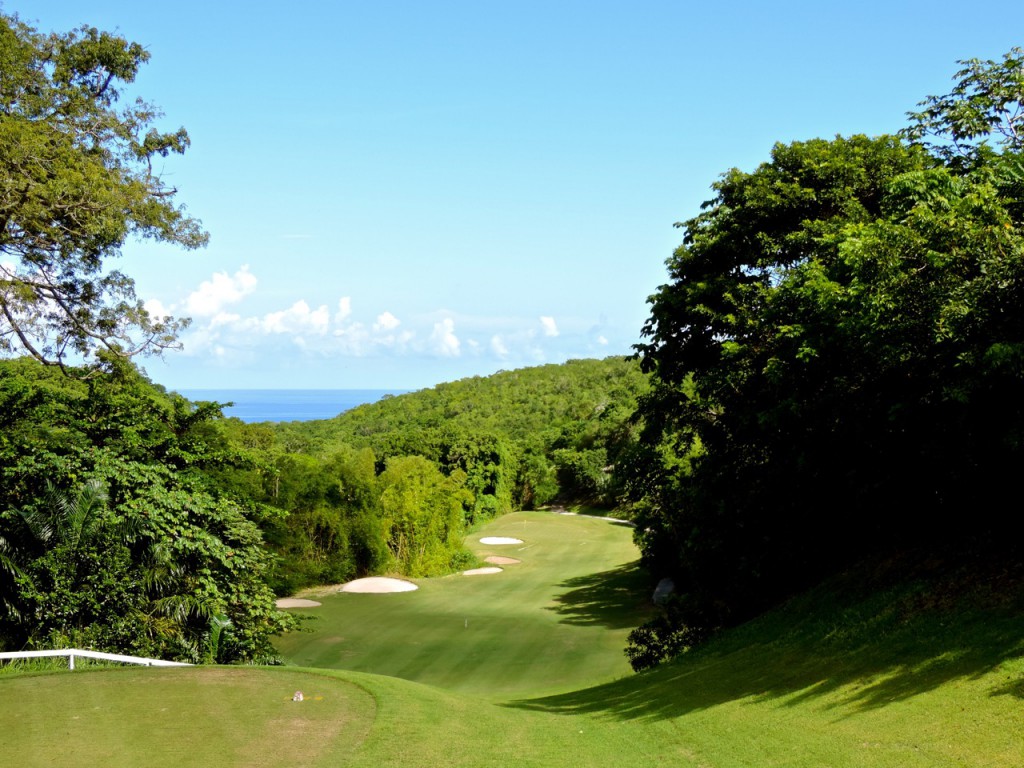 The picture postcard 349-yard 16th is a feast or famine. Long hitters from the highly elevated tee can reach the green with a driver or less, but trouble lurks. A sage strategy is to play the hole like back-to-back par threes with a conservative shorter tee shot.  (Photo by Robert S. Fagan) 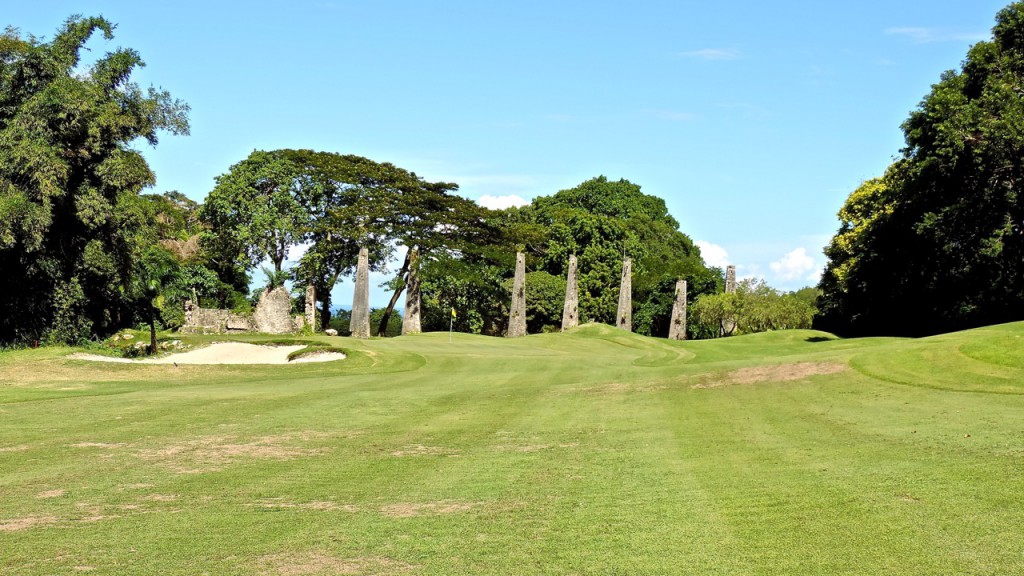 The 535-yard par-five 17th is the last of the downhill holes and features an excellent opportunity for a good score provided you hit it straight. Note the remains of an aqueduct behind the green.  (Photo by Robert S. Fagan) 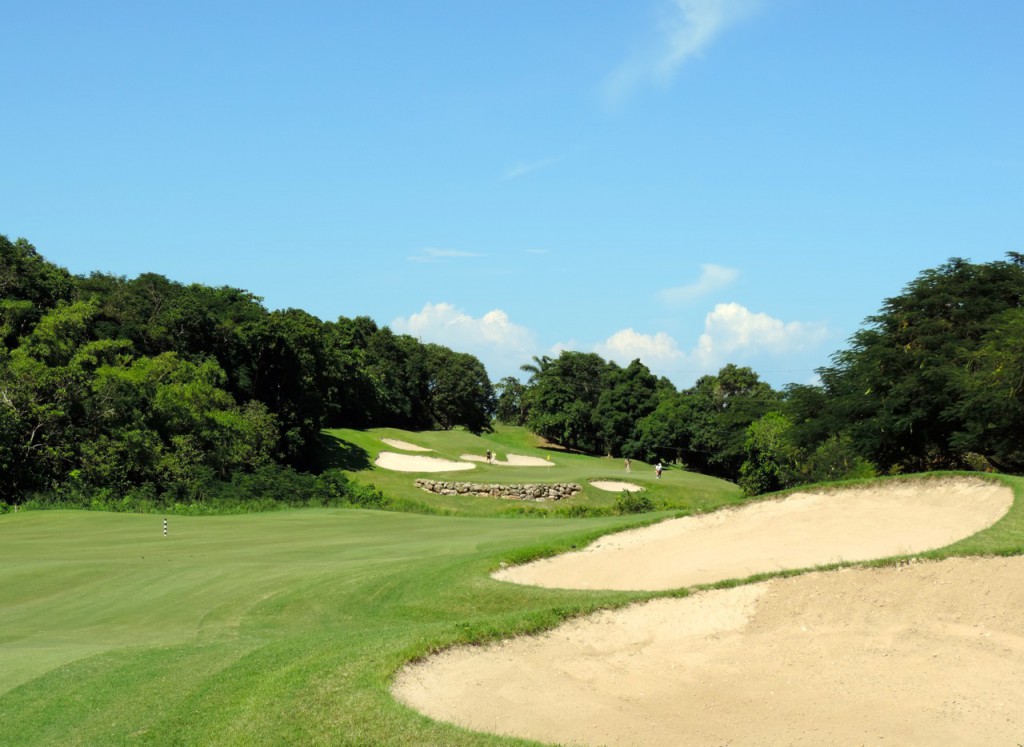 A strong right-to-left tee shot can result in getting home in two on the 502-yard par-five finishing hole.  (Photo by Robert S. Fagan)

Conditioning aside, I consider Cinnamon Hill to be a spicy-good golf course. Its variety of looks, terrains, and challenges make it a fun test for all. Its friendly, knowledgeable, engaging caddies and golf staff know their craft and contribute to your experience. For you, it’s a course you will want to play more than once to uncover its many mysteries and also enjoy its sublime views – my definition of “fun golf!”