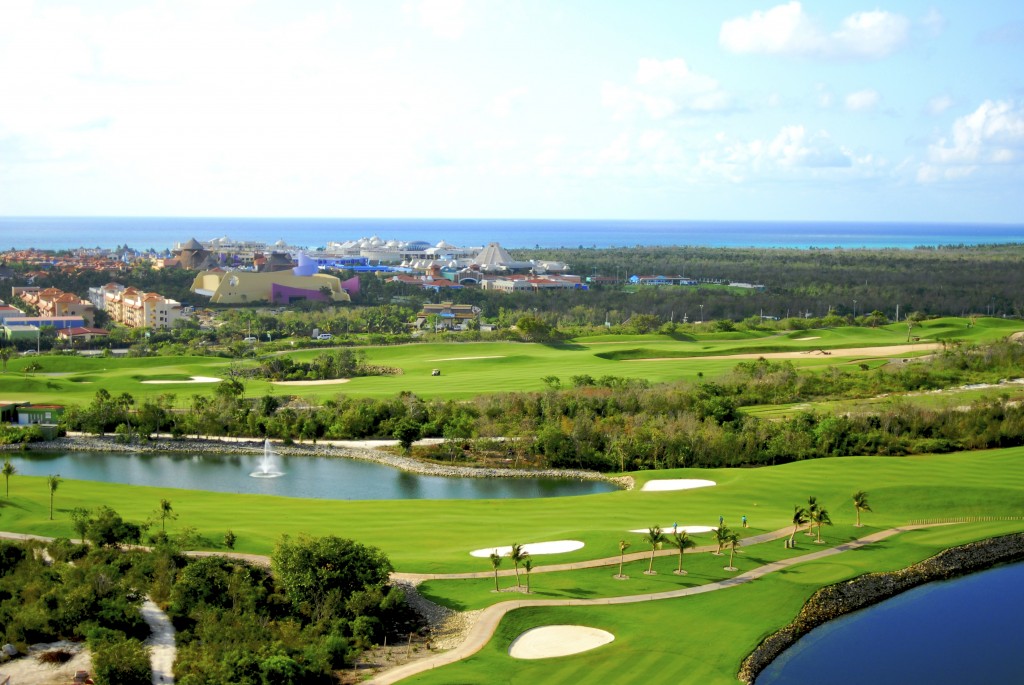 The Iberostar Playa Paraiso Golf Club sits only a short distance from the Caribbean and is mostly routed through jungle terrain.

Let’s face it, most of the Atlantic coastal areas in the Southeast US and Mexico feature relatively mundane terrain. That hardly makes for unique golf courses, let alone exciting ones. What a nice surprise, P.B. Dye crafted quite an engaging layout at the Iberostar Playa Paraiso in the greater Cancun area. Refreshingly, the architect spiced up the terrain just enough for it to stand apart. Located about 45 minutes from Cancun, but only 20 minutes to the Airport, this is the golf centerpiece for the Iberostar Resort, but can be played by outsiders as well. Dye moved a great deal of dirt in this verdant, but flat jungle area to create a visually exciting and entertaining layout that is a must-play when visiting the area. 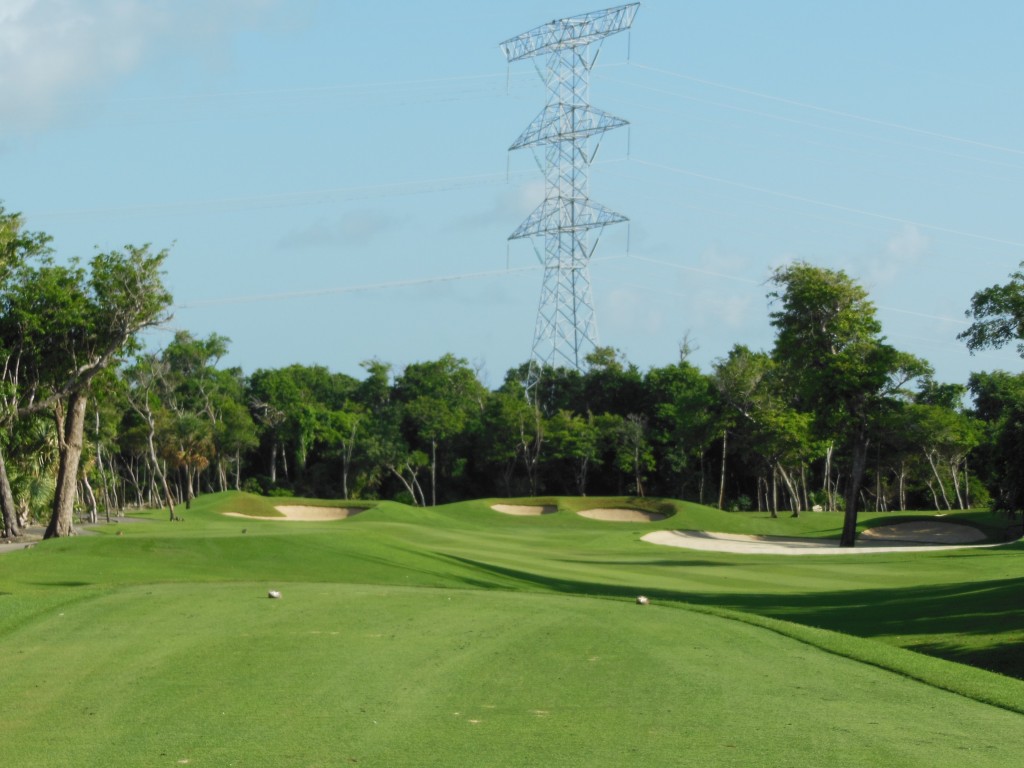 The dogleg right par-four 3rd hole is shown above and below. Your first task is to find the fairway and the second is to find the putting surface – no automatic tasks due to all the interesting bunkers and rolls. 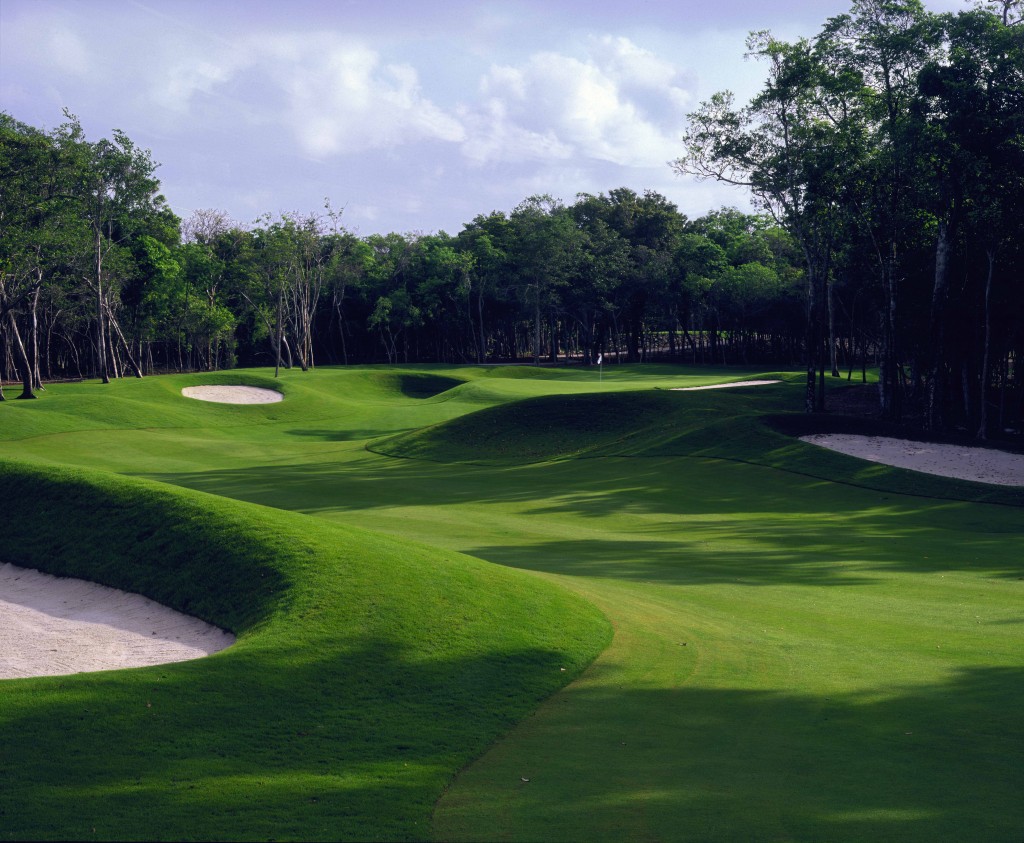 I’ve played several other P.B. Dye layouts and love some, but critics will say his abrupt shaping is over the top with artificial vertical mounding that looks completely foreign from the surrounding terrain. At Playa Paraiso there is some evidence of this such as the 18th hole, but overall it is not severe and it fits. In fact, while the 6,700+ yards are a suitable test for any player (course is used for the PGA Tour qualifier and boasts an impressive slope of 136 with a rating of 72.4.), it is also imminently playable. I found the par-fives the most entertaining and the par-three the most attractive, but the strength and versatility of Playa Paraiso is set by the two-shotters. 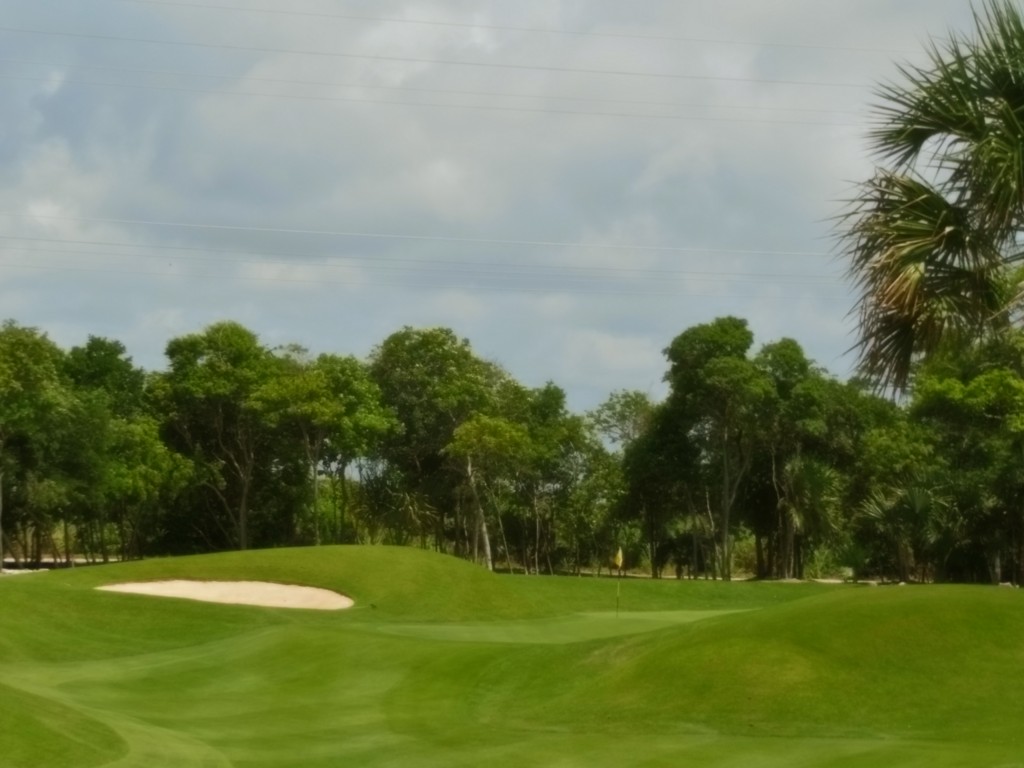 Again the mounding makes the green complexes anything but routine as shown by the short par-five 14th.

The par-fives are all reachable by long hitters. The fifth is tight with the green guarded by a tree directly in front of the putting surface. The seventh is wide open until you approach the putting surface and here is where P.B.Dye has  some fun with three distinct levels that effectively make for three separate putting surfaces. The little par-five 485-yard 14th looks more like a par-four, but you had better thread the needle and resist trying to cut the corner on this sharp dogleg left. Finally, on the last hole P.B. Dye could resist the urge to finally move mountains of dirt. It’s a fun finisher, but its shaping is exaggerated on this more unremarkable section of the property. 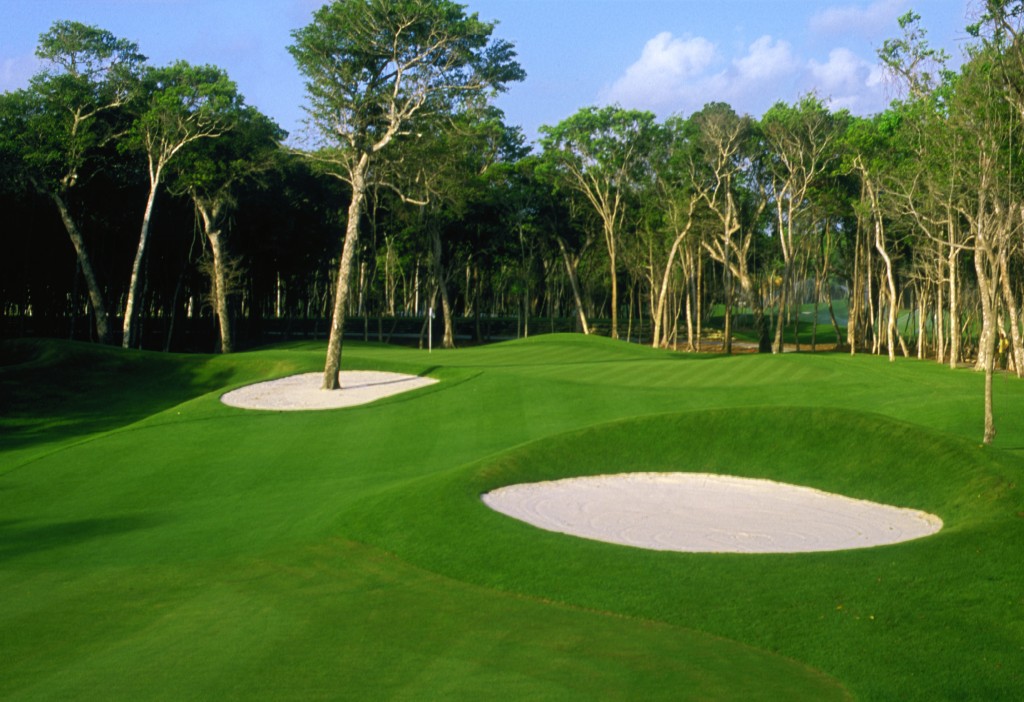 A tree guards the left half of the par-five 5th green.

The thing that I enjoyed about the par-fours is that while there are really no bruising holes length-wise, there are many good short and medium holes that make you shape your tee shots. Of course with the jungle, keeping it on the short grass is essential. 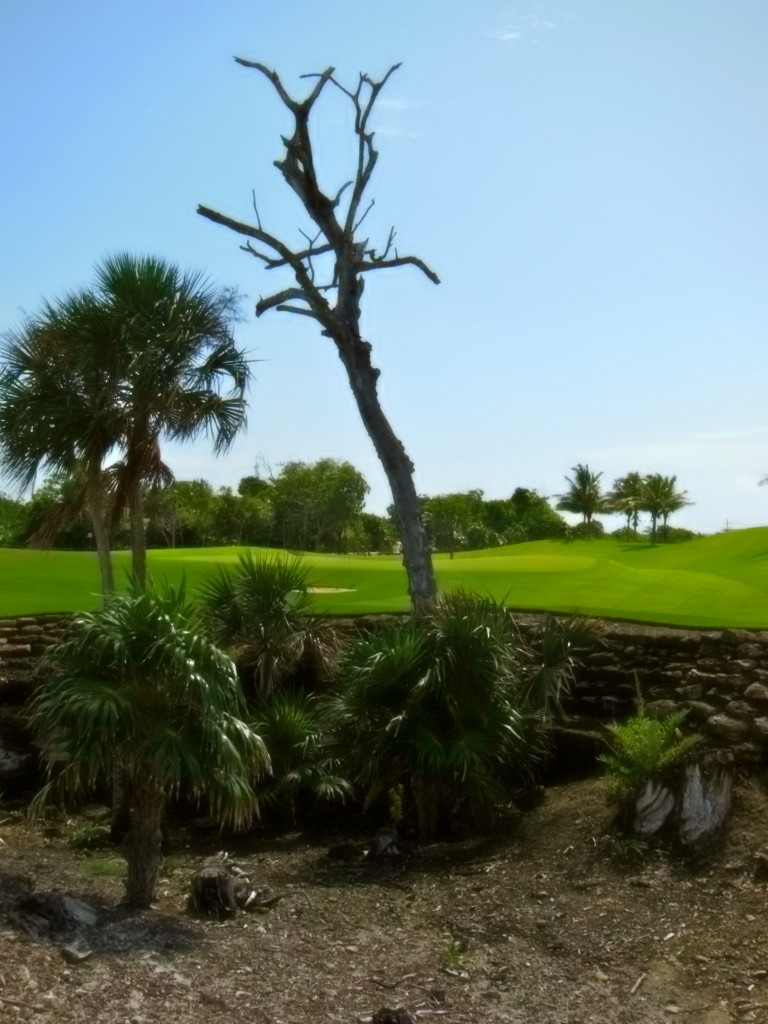 There are several limestone sink holes that golfers must avoid such as this one on the par-four 10th hole.

Of particular note is that this golf course is part of the Iberostar Hotel & Resort Complex. When combined with the Iberostar Grand Hotel Paraiso, I consider this the best all-inclusive golf resort offering anywhere. For more information on why, refer to: 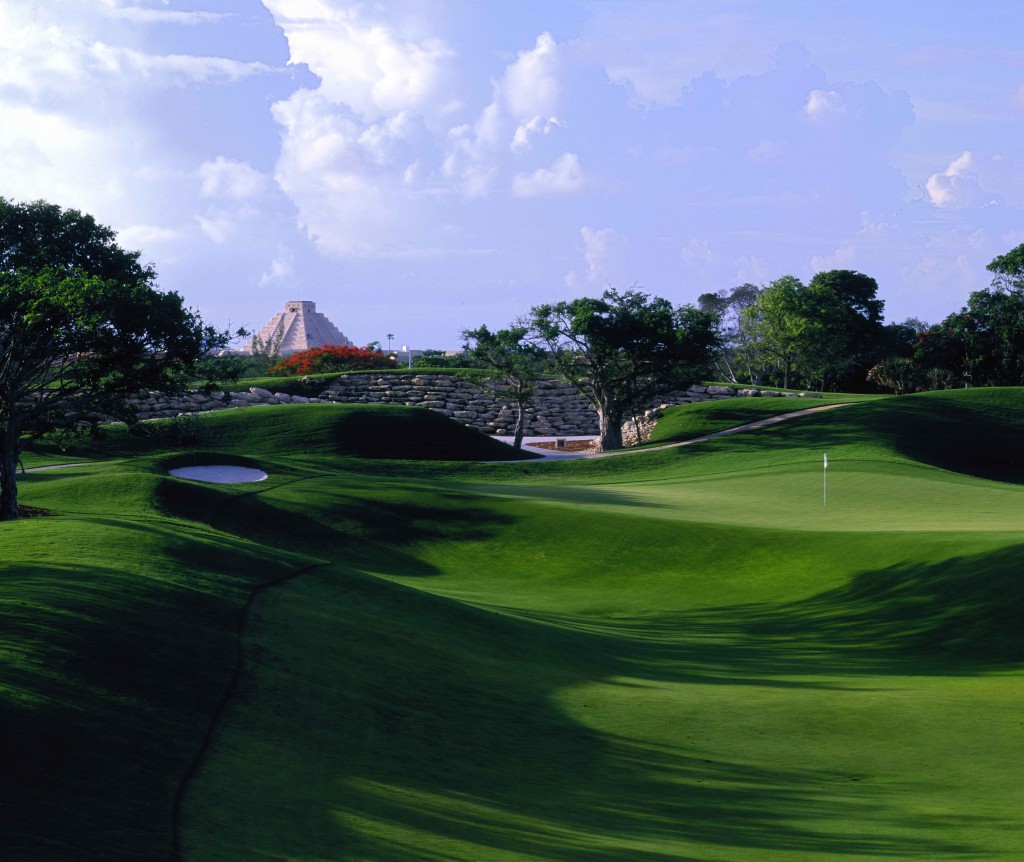 P.B. Dye fashions some bold greenside challenges around the putting surfaces as evidenced by the deep collection area just left of the par-four 9th green.