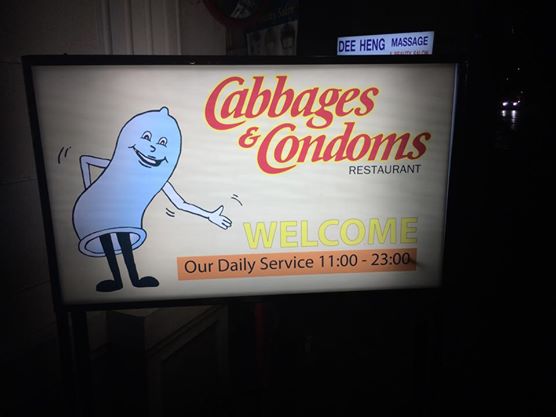 Have you ever heard of such an unusual name for a restaurant? And when you leave, instead of a bowl of mints or candy to take with you, there are two bowls of condoms! 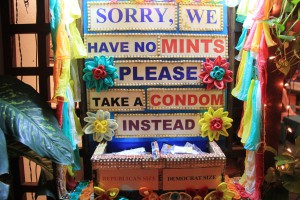 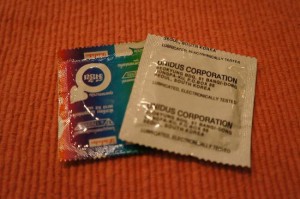 Well, if the food does not attract attention, the purpose behind this eatery has. Cabbages & Condoms was established by private, non-profit, Population and Community Development Association (PDA), under the direction of Mechai Viravaidya in 1974 to promote family planning and generate income to that end. At that time, Thailand’s families averaged 7 children each and were straining the country’s resources. Using the restaurant as a revenue-generator, the non-profit established community-based contraceptive distribution networks throughout Thailand providing not only education, but pills and condoms to villagers. Local volunteers were also solicited for providing information and birth control to their neighbors. Mechai believed that birth control should be as accepted and accessible as vegetables in the market.

In the restaurant, there are several larger-than-life-sized figures made out of different colored condoms. There is also a full gift shop with more than 1,000 different items for sale. I bought a T-shirt with the message, “Buy 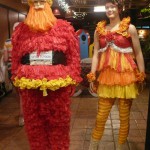 Stealth Condoms. They will never see you coming!” It should be a big hit at home.

The PDA has since proved to be one of Thailand’s largest and most successful non-profits. I have eaten at both the establishments in Bangkok and in Pattaya and the food is “Thai Delicious.” I quite enjoyed the Thai medley presented us. Yes, the theme is fun and makes for a number of jokes, but a few minutes into the meal, the culinary adventure took over. You could sit in either an open air area or one of several air-conditioned rooms in Bangkok whereas the table in Pattaya was right on the water’s edge. At both locations, the service was excellent.

Business must be good for now there is even a Birds & Bees Resort in Pattaya that sits right by the water. Anyway, it’s more than just a gimmick. Cabbages & Condoms is fun, tasty, and all goes for a worth cause. What more could you ask for? You can check out their website at: www.pda.or.th/restaurant.

P.S. The folks at Cabbages & Condoms make this claim: “Our food is guaranteed not to cause pregnancy!” And don’t forget to pick up a condom on your way out.