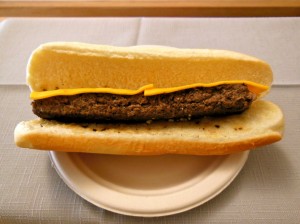 This is a naked “Billy Burger.” The fully dressed edition includes mustard, onions, dill pickles, and relish in addition to the American cheese though you can also get it with ketchup, mayonaise, lettuce, and tomato.

You know that a hot dog naturally tastes better at a baseball park. Well the same can be said for the hamburgers at The Olympic Club. These aren’t just any hamburgers either. They are rectangularly shaped to fit in a hot dog bun.

Back in the 1950s, Bill Parrish set up a trailer across the road from The Olympic Club. While locals and in particular the fisherman were his target market, the members from the club so liked his unique “burger dog” that they invited him in 1954 to take up residence between the 10th green and 11th tee on The Ocean Course. Accordingly these tasty treats were termed “Billy Burgers.”

Bill Parrish died in 1999, but his daughter Candy who assumed the business in the 80s continues to run the Olympic Club operation. Her brother Steve who was a golf teammate of Johnny Miller at Lincoln High School took the operation to the Silverado Resort in Napa, California. In a twist of fate, Miller has long been involved with both The Olympic Club as well as Silverado, and especially when he became a part-owner of Silverado in 2010. He has steadfastly maintained that the Billy Burgers that he so enjoyed in his youth at The Olympic Club remain at Silverado – a sage move.

So now you know the rest of the story. And by the way, I consumed eleven of these wonderfully delicious concoctions during four days covering the 2012 US Open never missing an evening snack.

P.S. And you know what else, these Billy Burgers easily make The Olympic Club and Silverado Resort even more special golf experiences – not to mention improving a US Open!