I’m not particularly star-struck, but it’s always nice to make a connection with a visible athlete who you enjoy and seem to connect with – especially if they have been a Facebook friend (which, by the way, translates to exactly nothing).

I once approached a very, very popular LPGA player who has also been a Facebook friend. That doesn’t actually make the relationship any more special, but who wouldn’t like to connect with someone with a truly larger-than-life personality? I had observed this vivacious young woman up close and out of spotlight at several PGA Merchandise Shows, but here was finally a nice opportunity to meet her. Besides, she was struggling with her game and I though I might be able to help her. Spotting her in front of the locker area before a practice round, I mustered up my courage and went up to her and with a warm, sincere smile simply said, “Hi, I’m Bob Fagan and it’s a pleasure to meet you. I’ve been a big fan of …” I couldn’t say another word, as her response surprised, no shocked me.

This player looked at me as if I was dirt, had jilted her, cut her off in traffic, and was also asking for money. She scowled at me, lifted her nose, twirled around and went on into her locker room with an air of utter disdain – not even an utterance of “Thanks.” A leper would have been treated better I thought. Wow, I was shocked major big-time. That just hasn’t happened to me. All I had wanted to do was let her know that I cared. So much for this extremely popular player that’s so full of personality – she’s not what the public sees I thought. I never shared my impression or the encounter with anyone.

A year later, I’m a guest in the Mirassou’s Wine Hospitality Tent at the same event – one of only about a dozen guests, along with Mr. Mirassou, and four LPGA professionals. One was Angela Stanford. What a sweetheart! She was so very nice that I felt I had met an old friend, sincere, and unpretentious too! In contrast to Stanford, this yet-to-be named LPGA player was there again. She’s got a BIG personality, but the shine was all directed to her host, her fellow players, and a few other “more important” guests. We never spoke. No big deal. Dressed differently, I’m sure she didn’t recognize me from either before or Facebook. Oh well, as I observed her, she reaffirmed my initial observations from the experience a year earlier.

This gal’s play was going into the tank. Her notoriety no longer matched her golf game. Having watched her closely inside the ropes at the practice range aside her teacher/father, she really impressed me with her talent. She should be at least a Top 5-8 player in the world – consistently for many years. Anyway with that surliness and already close relationship with her Dad, that was one gal I was never going to get to coach, let alone know. My opinion of her was affirmed disappointment, but again I never shared that with anyone.

A couple of weeks ago, Christina Kim went public with the fact that she has been battling severe depression. Yes, it was that Christina Kim I’ve been telling you about. Now depression not only includes irritability and an inability to smile and relate to others, but with Kim she has seriously entertained suicide. All this was happening during both my encounters with her. As I learned this, the lights were being to brighten for me – and teach me a lesson or at least a reminder. We never truly know what is happening for someone else, let alone someone like Christina Kim who is in the public spotlight. What I unknowingly encountered was a very hurting person under pressure. 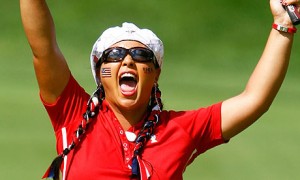 That immense personality –perhaps the biggest that the LPGA has seen in many years, hides the realities of everyday life that not only professional golfers, but everyone in the public spotlight goes through. They endure all the tragedies, trials, and tribulations that the rest of us do – often under even more duress and less understanding. They experience breakups, illness, injuries, the loss of loved ones, trust and financial problems, you name it. This past year, I’ve had two clients experience enforced suicide hospital watches due to severe depression. Though both have recovered outstandingly, I know first-hand how very real and frightening depression is. Depression can also be right in front of you and yet remain completely hidden. It was hidden with Christina Kim who was powered by the support of her boyfriend, the public adulation and close friends, but perhaps little else. Like another LPGA player Erica Blasberg who was lost, Kim was seriously contemplating ending her life.

My encounters with Christina were as much about me as they were about her. Aren’t all of our encounters in life that way? I didn’t have a clue what as going on in her life and all I knew is that my ego had been ignored for no apparent reason. As I coach others, it was a reminder to practice acceptance, awareness, kindness, and toleration myself. Yes, it’s difficult not to have an element of judgment or reaction when disappointed, but we never truly know about what’s affecting others do we?

For Kim like others, the athletic field is their safe place, their sanctuary. Unfortunately, she ended her 2012 season only making nine cuts in 20 events earning a meager $38,384 before expenses. Now Christina Kim must head to the Qualifying School for the first time. Though I imagine she is hopefully bound to receive numerous sponsor’s exemptions to be able to play should she have a detour with the Qualifying School, her golf path is presently uncertain. Golf is like that with no guaranteed contracts. Yes, now I am so glad that I didn’t share my initial disappointing impressions of Christina without knowing and being able to explain the rest of the story. I am even more delighted to get back on the Christina Kim bandwagon for SHE MAKES A DIFFERENCE. And the best news is that Christina is reportedly doing better.

The lesson I relearned is that we should not judge anyone. We don’t walk in their shoes nor do they in ours. Our experiences are so varied. Yes, we never really know about others and neither do I know where Christina Kim’s journey will take her, but I am confident she will continue to impact others in a very meaningful way. She already has done that for me. YOU GO GIRL!

P.S.  It’s just another reminder that I continue to need “Mulligans.” Don’t we all?

Happy Update:  November, 2014 – Christina Kim has returned to the winner’s circle capturing the next to last tournament of the 2014 LPGA season in a sudden-death playoff. That’s a long, long way that this beloved professional golfer has traveled since suicidal depression. Way to go, Christina!!!