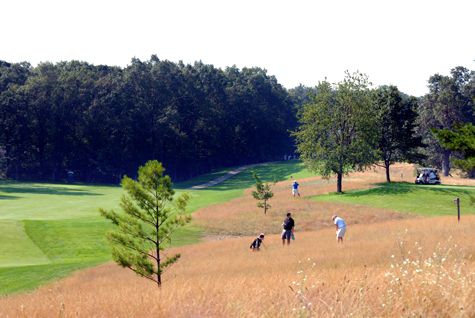 Do yourself a big favor and make your way today or tomorrow (June 21-22) to Muskegon Country Club to see the 102nd Michigan Amateur conducted by the Golf Association of Michigan. Your time and effort will be rewarded by watching some of Michigan’s premier amateur golfers compete in match play at one of the state’s best golf courses. For me that’s a triple-decker treat: high calibre golf, a fast and oft dramatic mano a mano format, and over a pristine, classic and walkable venue. What’s not to like?

I’ve been a huge fan of MCC and have long admired how the club has smartly pruned and reinvented this Donald Ross-redesign of a Tom Bendelow routing back to its singular essence. As in the case with many forward-thinking clubs (most notably Oakmont CC) around the country, MCC studied how too many trees on the property no longer served a good purpose to the original design and feel of the course.  Many trees were planted by past generations of Green Chairmen and Superintendents with little thought of their negative effects on turf quality, air flow, sunlight, and sight lines across the course.

After consulting with Brad Klein, Golfweek’s Senior Editor and noted golf architecture maven, MCC engaged in a long term plan to remove unnecessary trees in key areas of the golf course. Today, green sites at holes #8, #9 and #18 have been dramatically improved by smart tree removal, opening up the sight lines behind the greens while also adding another challenging element of shotmaking. As long time member and three-time club champion David Price told me recently, “Removing these trees really plays a trick on one’s depth perception, particularly at #9 and # 18. Now you really must know your yardage to the pin.” Price also applauds the tree removal for opening up vistas around the course. Now members gathered on the clubhouse deck can see golfers putt out on the finishing holes of both sides. In short, the club improved its eyesight with a form of laser turf surgery.

Besides its strong but never overly punishing layout, MCC is also known for its splendid unmowed fescue rough. Rough as an asset? Yep. MCC probably has the ideal fine fescue rough for general membership play. According to member extraordinaire Dick Topp, the current President of the GAM, Donald Ross is seen in a vintage club photo riding on a horse-drawn seed bin sowing the fescue himself. As quoted by writer Greg Johnson, Topp said, “A legend was making sure it was planted in all the right places.”

Indeed it was and is—some 100 years plus after Ross’s horse returned to the barn. The golden blades of fescue look beautiful in all the right places but yet still demand respect. But what I love about it—from afar—is how the fescue may exact a sensible half-shot penalty. A player can find the ball in this not too thick rough, allowing him a decent chance at a recovery shot. Due to the wet spring, the fescue is more dense for competitors this week. Yet here it still reminds me of the “playable” rough found overseas in Ireland and Scotland. I only wish more courses, especially public venues, would borrow a page from MCC on how to grow and manage its rough. And one more thing, the course plays delightfully fast and firm due to its sandy soil and bounces back quickly even after downpours.

Okay, enough about trees and grasses and soil. Let’s talk about the human component. Kudos to the membership of MCC for hosting the Michigan Amateur again for the second time in the past eight years. Hosting the Amateur is a major undertaking and sacrifice by staff and members alike but MCC has proven to be up to the task. More than 180 volunteers have turned out for the event, assisting in all facets of the tournament. Under the leadership of Tournament Chair Bob Kwiecen, GM Patrick Ferkany, Head Pro Ted Tallefson and Superintendent Jeff Hopkins, Muskegon CC is rightfully standing tall and proud this week while delighting and confounding scratch players.

Somewhere Donald Ross is smiling with a blade of fescue between his teeth.