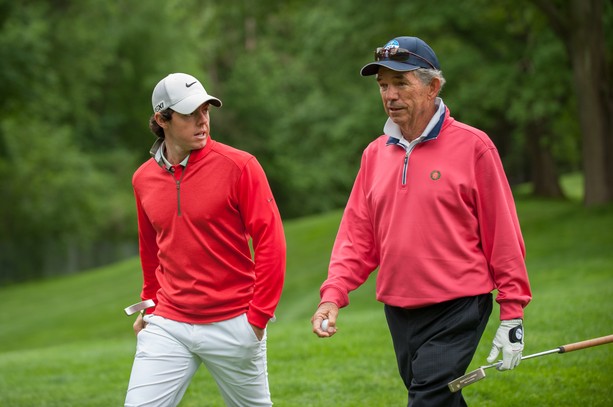 The long-time head professional at Oak Hill talks about his course, as well as growing up in the ultimate golf family.

For the past 40 years, Craig Harmon has been the PGA Head Professional at Oak Hill Country Club, site of this year’s PGA Championship. He grew up in a heralded golf family led by his father Claude, the 1948 Masters champion and long-time Winged Foot GC head professional, and among his three brothers—Butch, Dick and Billy. Like his father and brothers, Harmon, 66, became a highly skilled instructor and today is ranked by Golf Digest as the 22nd best teacher in America. In 2005, he was named Golf Professional of the Year by the PGA of America. He’s also a member of the club’s “Hill of Fame,” joining such luminaries as Walter Hagen, Ben Hogan, Arnold Palmer, Nancy Lopez, Bob Hope, and former U.S. Presidents Dwight Eisenhower and Gerald Ford. He spoke with me a few weeks before the PGA Championship.

How intense was the sibling rivalry between the Harmon boys?

It was always very competitive. Butch was the oldest and Billy the youngest while Dick and I were the middle two. No matter the sport—football, baseball, basketball, or golf—we’d pair off against each other with Butch and Billy competing against us. Butch was a great athlete, a rough athlete I may add, and he had no problem protecting his little brother Billy. To say the least, the golf matches between us were quite intense.

Much has been written about your dad and brothers, but what about your mom?

My mom passed away too soon in 1970 so she didn’t get to see what her sons and daughters [Claudia, Allyson] accomplished. But Alice was a wonderful lady and a major influence, always reminding us about the importance of good manners and respect. She was a stickler about writing thank-you cards and how to treat people properly. Thankfully, she lived long enough to see us turn out as ladies and gentleman. She made sure of that.

What are the keystones behind your career as head professional?

There are several factors. Number one is the staff. It’s hard to accomplish anything without a professional staff. I always remember my dad’s advice to me after I told him I was selected as head pro in 1972. He said, “Hire ladies and gentlemen first and then turn them into golf pros and shop staff.” Number two is always trying to stimulate golf at the club. In as many ways as possible, we encourage the playing and enjoyment of the game. And third, we aim to instill a friendly atmosphere. A friendlier atmosphere is better than a business atmosphere for a golf club. We want our staff to be open and personal with members and ask them about their day.

What are the building blocks of a sound swing?

Talk about the East Course and the set-up for the PGA Championship?

The big difference here is that when players miss fairways not only will they have to deal with the rough to get to the green, but they’ll have a tree in the way. However, the PGA’s set-up now calls for an intermediate cut in addition to the first cut off the fairway so it should play easier than in previous championships. For member play, we just have a first cut. In five stroke-play championships held at Oak Hill only 10 players have been under par. Yet it’s considered a fair test. The premium is on driving the ball well. The fairway angles require you to both fade and draw the ball and you have to fit your drive in there. Pardon the expression, but here you have your ass puckering off of the tee for 72 holes. Yet, it’s still a fair test because there’s not an out of bounds stake one inch off the fairway like you find at some courses. Several years ago when I played Merion’s 15th hole, the road was OB. But for this year’s U.S. Open, they moved the stakes more inside the golf course and just off the fairway. That doesn’t seem fair to me.

Talk about a few key holes.

On the front nine, people don’t talk about the par-three 3rd hole. At 220 yards, that’s a hard hole. And numbers 5, 7, and 9 are all tremendous par fours, easy to bogey. On the back nine, the 15th green was redone and now if you miss it left—which is easy to do—you’ll have a difficult time getting up and down. In fact, those missing it left risk chipping it back on and over the green and into the water. The rough is really thick down there. And 15, 17, and 18 are phenomenal holes. Unfortunately, modern golfers are rendering 16 as too easy: It’s just a drive and a wedge now where Jack Nicklaus and Curtis Strange in their day were hitting a drive and a 6-iron.

Name a few special places at the club that a guest should visit.

The Centennial Walk located near our upper putting green is like a mini-museum. It commemorates the champions at Oak Hill including the Ryder Cup. Inside the clubhouse, the Trophy Room is spectacular, with replicas of all the major championship trophies. There’s video playing from the PGA and USGA events played at the club, including video from the 1956 U.S. Open. If you’re a golfer, you want to see this room.

For members, what makes Oak Hill so appealing?

With two courses, we are a very busy club with a thousand people on the handicap list. But we have no starting times. And in spite of being a very prestigious private club, we encourage men, women, and children to just come out and play golf without restrictions. Though we have electric carts and a great caddie program, members can walk and carry their own bag or they can use one of our free pull carts. Of the top 20 clubs in the country, Oak Hill is unique in this regard. This is a working-class club where membership is seen as a luxury item. Members shouldn’t have to incur an added caddie or electric cart fee if they just want to walk and play nine.

This interview appears in the Majors Plus EMagazine at www.tourontap.com