(Bowling Green, Fla.) When celebrated golf course architect Bill Coore received a phone call several years ago about designing a destination resort course in Florida in the middle of nowhere, he balked at the idea. Firmly. Given the struggling state of the golf economy in general and the sheer number of courses in Florida specifically, he just couldn’t get too excited about the idea. This in spite of it being proposed by the deep-pocketed Mosaic Company, the world’s leading producer and marketer of phosphate-based crop nutrients and one of Florida’s largest landowners. But before making a final decision, Coore decided to visit the site in Polk County, nearly 50 miles northwest of Tampa. To his amazement, the architect found a stunning piece of property—once a phosphate land mine—amidst an eye-popping 16,000 acres.

The rest, as they say, is history. Or should I say history in the making, as that land has been transformed into Streamsong, a spectacular resort featuring world-class golf (18 holes each by Coore & Crenshaw and Renaissance Design—Tom Doak), clubhouse, lodge and spa. Only opened since January 2013, Streamsong has received such rave reviews, accolades and buzz it seemingly borders on hyperbole.  I mean, Golf Digest’s rankings included it among the “Top 20 U.S. Golf Destinations” last year. And this ranking appeared before the lodge was even opened!

Could it be true: is Streamsong really that good? Well, after experiencing it recently on my way north from Naples, Fla., I can emphatically say, “Yes!”  And although “brevity is the soul of wit and lingerie,” permit me to elaborate.

With time only to play one of the courses, I opted for the Blue Course designed by Tom Doak of Traverse City in my native Michigan. (Note: I did a cart tour of the Red Course by Coore & Crenshaw. More on that later.) As introduction, let me say the scenery, surroundings and topography of the golf course were beyond all my expectations. In fact, just getting to the resort was a journey in itself but there’s good signage to guide the way. Normally, when planning to play a high profile new course I try not to read too much background information. Why spoil the surprise? Accordingly, I’ll try to limit my remarks to a few holes on each side and general overall impressions. 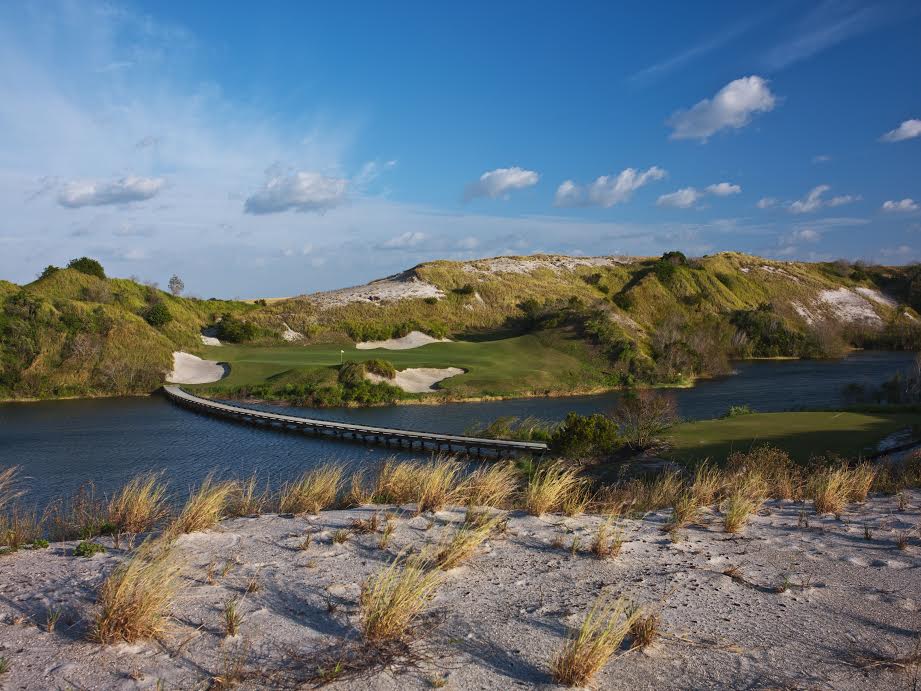 Walking off the final green, the consensus of our little golf fraternity was that we had just played an inspired and most uplifting course, one we’d jump at playing again. Mary’s forward tees were thoughtful and forgiving and she managed her round well. Due to the speed, movement and contours of the greens, putting was onerous and often deflating. As mentioned, tough pin placements that day compounded the problem. Earlier, I spoke to a player who had played the Blue several times and he regularly incurred a rash of three-putts. But he also said his playing companion—“a very good putter”—handled the greens without difficulty.

In fairness, the demands of the greens are offset by wide, generous fairways and frequent open approaches to the putting surfaces. And Doak’s famed minimalist design philosophy—a deft discovery and shaping of natural land forms—is marvelously on display. The grassy dunes left over from mining excavation (pre-1960s) lend an epic Irish links look and appeal to the experience. And in spite of the rise and fall of the elevation throughout the round, the Blue was still a comfortable and soul-stirring walk over firm, fast and healthy turf. Kudos to Head Superintendent Rusty Mercer.

Taking a cue from the movie critic parlance, I’d confidently give the Blue four shining stars. Expertly conceived and directed, its plot and setting deliver suspense, surprise, joy and heartbreak. You just gotta come down to see it.

As noted, I didn’t have time to play the equally inviting and highly touted Red Course by Coore & Crenshaw. I did receive, however, an extensive and insightful cart tour by the Head Golf Professional and fellow Cleveland sports team sufferer Matt Jordan. I also spoke to a number of players then and afterwards about the Red and how it stacked up against the Blue.

The Cliff’s Notes version is this: Both courses are worthy of their accolades and agreeably fit and complement one another with their design sensibility. In general, the Blue is more forgiving off the tee while the Red is more forgiving on the greens. For turf quality, Blue currently has an edge because the first six holes on the Red were the last to be grassed on the property. But that difference will even itself out over time. As a side note, my brother played the Red course recently and he compared it favorably to Sand Hills Golf Club, the Coore & Crenshaw masterpiece in Nebraska.

I particularly liked the short par-three 8th, only 147 yards from the championship tees but with plenty of teeth and guile. And like the Blue’s 13th, the Red has a reachable par-four that offers both risks and rewards. “Both the 7th and the 9th holes are favorites because they allow players the chance to score but they’re not pushovers,” said Jordan.

Jordan related the story about the how the courses were named. When the dual design teams were reviewing topography maps of the property, they alternated their selection of holes by using a red (Coore/Crenshaw) or a blue pencil (Doak.) Just those two primary colors. Now that’s minimalism.

Designed by Alfonso Architects with unprecedented input by the golf course architects, Streamsong’s golf clubhouse features 12 guest rooms (accommodating 16 guests); 4,500 square-feet of meeting space, a three-meal steak and seafood-themed restaurant with private dining, a lounge and golf shop. Like everything else at Streamsong, it’s a story onto itself.